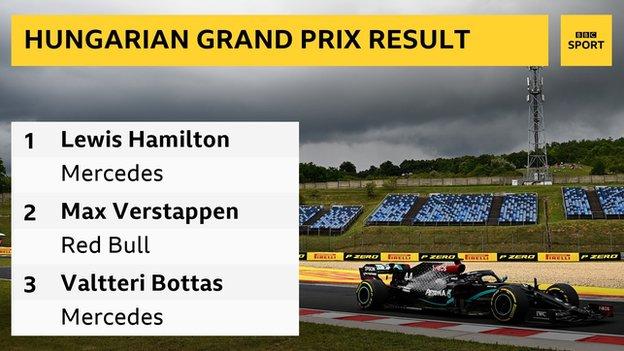 Lewis Hamilton moved into the world championship lead for the first time this season with a dominant victory in the Hungarian Grand Prix.

The Mercedes driver pulled out an eight-second lead in three wet laps at the start of the race before switching to dry tyres, and controlled the race from there.

Hamilton even had time to stop for fresh tyres with three laps to go to grab the extra point for fastest lap.

Valtteri Bottas failed in an attempt to pass Red Bull’s Max Verstappen for second, giving Hamilton a five-point championship lead over his team after three races.

Verstappen’s second place was extraordinary, for he crashed on the laps to the grid and damaged both his front wing and suspension.

The Red Bull mechanics worked wonders to change his left front push-rod on the grid in the time permitted and get him into the race and he then drove a superb race to hold off Bottas at the end.

It was Hamilton’s second consecutive victory in the third race of the season, and it came after another anti-racism protest from the drivers before the race.

It ended up slightly chaotic, as it had in the Styrian Grand Prix a week ago, with the drivers rushing to take part. But as in the first two races, most of the drivers ‘took the knee’ alongside Hamilton, while a few chose to remain standing for their own reasons.

Hamilton’s win was never in doubt once he shot away from the field at the start, while Bottas may be considered lucky to get away with an apparent jumped start.

The Finn moved before the lights went out and then stopped again, saying he had reacted to a light on his dashboard. The subsequent slow getaway dropped him to sixth place on the first lap.

Hamilton took advantage to show off his renowned wet-weather skills in the opening laps, moving six points clear of the Racing Point of Lance Stroll in two laps and adding a further two seconds before pitting at the end of the next lap as the initially wet track quickly dried.

By the time the other front-runners had all stopped a lap later, Hamilton was 7.8secs clear and in a position to control the race, and he simply moved further and further away as the laps ticked by.

It was his eighth win in Hungary – and he now shares the record for most wins at a single circuit with Michael Schumacher.

A missed opportunity for Bottas

Verstappen and Red Bull had had a difficult weekend, the Dutchman qualifying only seventh in what he said was a difficult car. But after the scare on the grid, a brilliant first lap put him up to third behind Hamilton and Stroll, and he was second by lap five after the pit stops for dry tyres.

There will be questions as to how Bottas was not penalised for moving before the lights – just as there were with Ferrari’s Sebastian Vettel in a similar incident in Japan last year.

Once the Finn got going, he drove patiently and by mid-race was up to fourth, taking third from Stroll when they pitted for fresh tyres.

Bottas caught Verstappen with 25 laps to go and then Mercedes pulled the same strategy as they had to win the race with Hamilton last year, pitting him again for fresh tyres with the idea of catching and passing Verstappen before the end of the race.

But while Hamilton managed it in 2019, Bottas did not catch Verstappen until the final lap, and it was too late to pass the Dutchman.

It was a three-point boost for Hamilton and the sort of missed opportunity for which Bottas might pay this year, when the title fight seems to be a private one between the Mercedes.

Stroll was a strong fourth for Racing Point, while Red Bull’s Alexander Albon twice took advantage of unforced errors from Vettel – once early in the race and once close to the end – to take fifth ahead of the second Racing Point of Sergio Perez.

Ferrari’s Charles Leclerc could manage only 11th, out of the points, after a decision to put him on the unloved ‘soft’ tyres at his first pit stop. Most teams avoided them, as they were prone to ‘graining’ and Leclerc struggled with a lack of grip before being forced into an earlier-than-ideal second stop, which left him on old, slow tyres in the closing laps, when he lost out to McLaren’s Carlos Sainz.

Verstappen takes it for his controlled management of the race and cool recovery from his error on the treacherous surface before the grid. Splitting the Mercedes will feel almost like a win for the Dutchman when they have an advantage like this. An honourable mention for Kevin Magnussen, who hung on for two points for Haas in ninth after the team gambled on stopping for dry tyres after the formation lap.

A weekend off and then the British Grand Prix, the first of two weekends at Silverstone. Mercedes are looking unstoppable and Hamilton will be determined to add to his record tally of home wins.