Derrick Lewis found himself flat on his back late in the first round, deep in the grasp of submission specialist Aleksei Oleinik. Lewis survived the choke attempts, but he admitted that getting to the second round on Saturday night was dicey.

“I couldn’t breathe at all,” Lewis said in the postfight interview.

He made sure that he wasn’t in the same predicament early in Round 2. Lewis came out of the corner with a flying knee, then landed with a right that dropped Oleinik. Lewis then used his ground and pound to finish the fight in Las Vegas, becoming the promotion’s leader in knockouts by a heavyweight with 11, passing Cain Velasquez and Junior dos Santos. 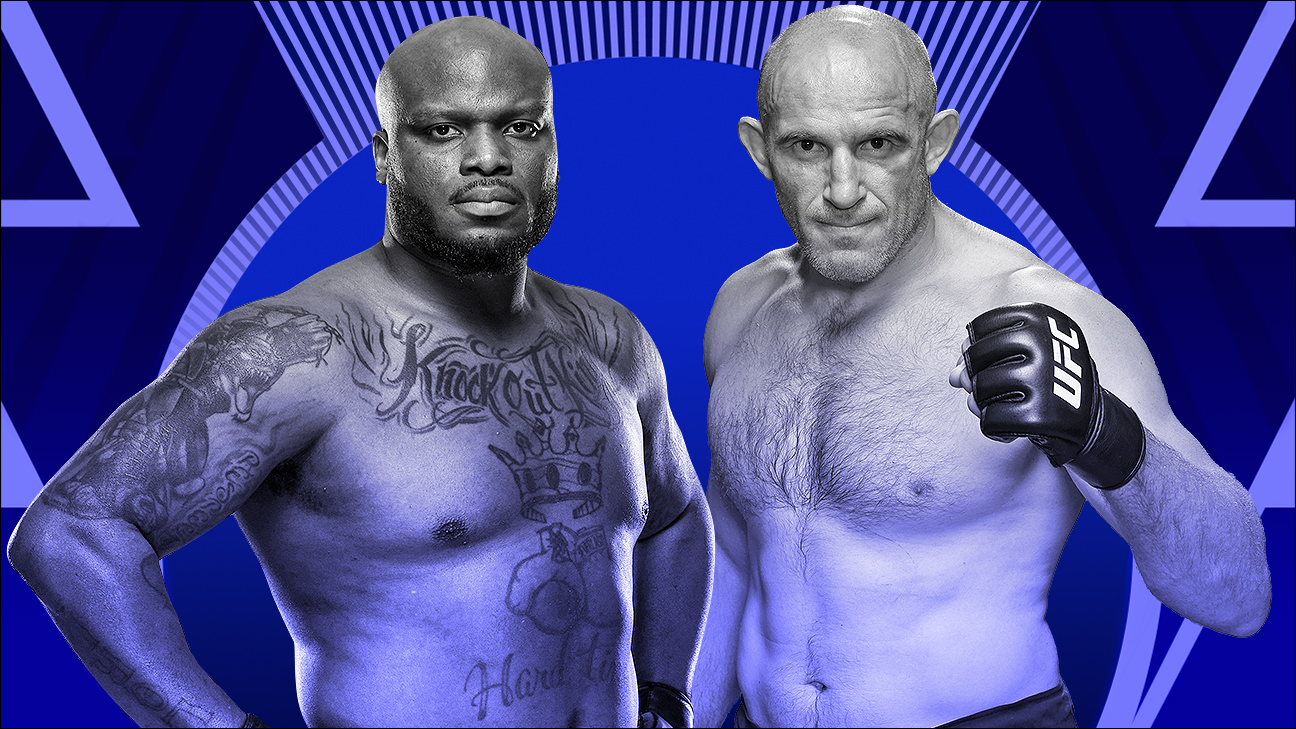 All fights from UFC Fight Night: Lewis vs. Oleinik will be available to watch on ESPN+.

The win helped Lewis, who is ranked as the No. 6 heavyweight in the world by ESPN, remain in title contention. He’s won three straight and denied Oleinik his 60th career win.

Saturday also was key for Chris Weidman, the former UFC middleweight champion. He is far from a title contender after entering the weekend having been KO’d in five of his past six fights. But he may have saved his career after earning a unanimous decision win — his first victory in three years – over the surging Omari Akhmedov, who was on a six-fight unbeaten streak.

ESPN’s expert panel of Ariel Helwani, Brett Okamoto, Marc Raimondi and Jeff Wagenheim takes a closer look at the headliners on Saturday and several other fighters who shined at the UFC Apex.

What’s your biggest takeaway from the main event?

Okamoto: Derrick Lewis is gonna Derrick Lewis. He is, at once, one of the easiest dudes to figure out in the heavyweight division — and one of the most confusing. He’s previously stated he doesn’t even really enjoy mixed martial arts, and doesn’t view himself as a mixed martial artist. He’s said he doesn’t care about winning a championship. He reiterated some of those statements this week — and in the same breath, he says he won’t take any more fights until he loses some weight so he can perform better (which is also something he’s said repeatedly throughout his career). If there is a takeaway here it’s this: Just enjoy Lewis. Don’t try to figure him out. He’s a banger, in a division that loves bangers, and he’s a character in a sport that loves characters. Don’t take his pre- or post-fight interviews too seriously. Tune in for the haymakers and the comedy and enjoy.

Who’s next for Derrick Lewis?

Helwani: For a guy who was worried his career might be over earlier this year due to a health issue, Lewis looked pretty darn good on Saturday night. He came out aggressive to start the first and second, and it paid off in the second. That’s three in a row now for the big man, who is currently ranked fourth in the UFC’s heavyweight division. I said before the fight that, if he won, I’d like to see Lewis fight Curtis Blaydes or Alistair Overeem, if Overeem beats Augusto Sakai next month. I stand by that answer. Both fights make a lot of sense. I know Blaydes would be into it because he’s wanted that fight for a while — he also tweeted that sentiment right after the fight — and I believe Overeem would want it, too. Lewis said he wants to return in December, so both options should be available. Blaydes, by the way, doesn’t have his next fight booked, I’m told.

Who’s next for Aleksei Oleinik?

Wagenheim: Had Oleinik won, I would have suggested that he sit back next Saturday night and enjoy watching some fights — while doing a little scouting on perhaps his next opponent. I was referring to not the UFC 252 main event but rather the other heavyweight bout on that main card: Junior dos Santos vs. Jairzinho Rozenstruik. A matchup against the winner of that top-10 clash would have made sense and lined up nicely, in terms of timing. Well, I still think that fight next weekend could produce Oleinik’s next opponent — except now, obviously, he should face the loser.

Oleinik is 43 and a veteran of 74 pro fights. It’s tempting to say his shot at being a contender was bludgeoned out of existence by Derrick Lewis on Saturday. But Oleinik put up a good fight, threatening Lewis with a first-round submission. Give him another striker, another fighter in need of a win to remain a relevant heavyweight, and see who survives.

What’s your biggest takeaway from the co-main event?

Helwani: Chris Weidman desperately needed that win. And he got it done. It didn’t have to be pretty. It didn’t have to be a finish. He just needed to get his hand raised for the first time since July 2017. And that he did. Was it vintage Weidman? No. Was it one for the highlight reel? Probably not. But it was one of the most important victories of his career because of what it will probably do for his confidence.

Now that he’s got the “W” out of the way, he’ll no doubt be more relaxed the next time out. He seemed a tad tentative this time around, and he definitely got hit with some big shots in the second round, but in the end the right man won. I thought he won the first and third rounds rather convincingly. A solid win for a former champion, who just needed to feel that feeling again. If I were him, I wouldn’t even stress about getting a big name next. Forget the title for now. Just keep building on that growing confidence. For now, welcome back, Chris.

Who’s next for Chris Weidman?

Okamoto: I’ve seen a lot of calls for Weidman to retire in 2020, and honestly, I’ve thought they were overblown. Yeah, he was 1-5 in his last six coming into this weekend, but think about those fights. Losses to Yoel Romero, Gegard Mousasi and Ronaldo ‘Jacare’ Souza — those were all competitive fights until Weidman made a fatal flaw that resulted in a knockout. Not the results you want, but also not someone who needs to retire. After Saturday though, I don’t know what’s ahead for the 36-year-old Weidman. He’s not shot, but he does not look like a top-10 middleweight, and those are the fights I think he’ll get because of his name value. I could see the UFC pairing him with Derek Brunson, who doesn’t have a dance partner coming off a big win against Edmen Shahbazyan last weekend. Brunson wants someone higher ranked, but Robert Whittaker and Jared Cannonier are booked. Darren Till and Jack Hermansson have expressed interest in facing each other. I think it’s Brunson vs. Weidman, and everything is a “must win” for Weidman moving forward.

Who’s next for Omari Akhmedov?

Raimondi: How about Kelvin Gastelum? The former interim middleweight title challenger has fallen on some hard times of late, with three straight losses. Of course, all of those have been against the absolute best 185-pound fighters in the world. It’s time Gastelum gets a slight drop in competition. And truly, Akhmedov isn’t that far of a drop. He’s right on that second or third tier of middleweights in the UFC. Akhmedov has big power and strong wrestling. He was unbeaten in six straight coming in. Chris Weidman had to really push to beat him Saturday night. Gastelum vs. Akhmedov would likely be a pretty competitive bout.

How far is Beneil Dariush from becoming an elite lightweight?

Wagenheim: Scott Holtzman walked into the Octagon on Saturday night having never been finished in 17 career fights. Beneil Dariush knocked him out in the first round. As eye-opening as that was, it was nothing new for Dariush. Back in March, he had stepped in with Drakkar Klose, who in 13 previous bouts had never been finished — and Dariush got the KO that time as well. That gives him five straight victories. Two of them were submissions, which always have been the bread and butter of Dariush, a two-time no-gi world champion in jiu-jitsu. Now that he’s adding power punching to his arsenal, watch out, top 10.

Who knows where the ceiling is for the 31-year-old native of Iran, who trains with Rafael Cordeiro at Kings MMA in Southern California? But it’s time to find out. The question is, should Dariush set his sights on a name opponent who’s struggling a bit, maybe Al Iaquinta, who has lost three of his last four? Or how about someone who, like Dariush, is on an upward trajectory, like Diego Ferreira, winner of six in a row? The lightweight division is stacked, and Dariush is looking like a fighter in his prime, in need of a matchup that will tell him how far he can go.

Which prospect impressed you the most?

Raimondi: Youssef Zalal continues to impress. After winning a short-notice unanimous decision over Jordan Griffin in June, the 23-year-old blue-chipper added another UFC win Saturday against Peter Barrett. This one was even more dominant. Zalal almost got a finish in the first round with an absolutely wicked spinning back kick to the face. Somehow, Barrett survived, but Zalal was on the winning side of a lopsided unanimous decision. That makes three straight wins in the UFC for the Morocco native. Coach Marc Montoya and the team at Factory X in Colorado are very high on Zalal and it’s easy to see why. He’s a flashy-but-effective striker and can more than hold his own in the grappling department. Zalal is still so young, but he is absolutely someone to keep an eye on in the UFC featherweight division.

What to watch in Sunday’s NHL Game 7s: X factors, predictions
Giannis Antetokounmpo vs. Jayson Tatum: A rivalry that could determine the East for years
Fox cards 66 to claim Day 3 lead in Belgium
Stars’ Bowness, 67, hoping to stay, has ‘fire left’
Giants, Chiefs and more get creative with schedule release