Kenta Maeda is what I refer to as a kitchen sink pitcher — as in he’ll throw the whole kitchen sink at you. On Tuesday night, the veteran right-hander had everything working for the Minnesota Twins in their Major League Baseball game against the Brewers: fastball, sinker, slider, splitter, blender, waffle iron. Through eight innings, the Brewers looked helpless. Maeda had not allowed a hit and had 12 strikeouts. He had induced 26 swings and misses, a huge total. Of the 76 individual no-hitters thrown since 1990, only seven of them had more than 25 swings and misses. The 26 misses also rank as the second-highest single-game total of 2020, behind Shane Bieber’s 27.

Alas, on Maeda’s second pitch of the top of the ninth, Eric Sogard hit what former White Sox announcer Ken Harrelson would have called a duck snort to center field. The little blooper fell just beyond the reach of shortstop Jorge Polanco, who actually slightly overran the ball as it reversed its path like Minnesota Fats banking an impossible shot.

Still, it was a marvelous effort, the latest of an early string of them for Maeda. The pitch to Sogard was Maeda’s 115th of the night, the most he’s ever thrown in one game in the majors, so his night ended and he then watched as the Brewers rallied for three runs to tie the game, which means Maeda didn’t get the win in the best start of his major league career. The Twins eventually pulled out the 4-3 victory in 12 innings as Byron Buxton scored the winning run from second base on two shattered bats. (Yes, kids, sometimes you just need to put the ball in play.)

Maeda is 3-0 in his five starts with a 2.27 ERA and just 14 hits allowed in 31 ⅔ innings. Among qualified starters, he ranks second in the majors in lowest batting average allowed, first in OBP and tied for first in OPS.

The Twins acquired Maeda from the Dodgers in February in a deal for hard-throwing relief prospect Brusdar Graterol, with two other prospects also exchanging teams — and the Twins receiving $10 million in cash from the Dodgers as well. (Maeda was originally part of the Mookie Betts trade as part of a three-team deal, but the Red Sox were concerned about Graterol’s medicals and the Twins and Dodgers re-worked the Maeda portion of the deal.) 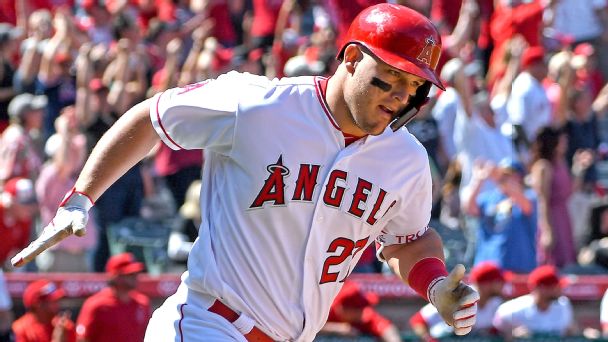 It was an astute bit of maneuvering by the Twins’ front-office duo of Derek Falvey and Thad Levine. Maeda is signed through 2023 and the Dodgers, with Dustin May and Julio Urias ready for rotation gigs, were basically looking to clear some salary space for Betts and David Price. Maeda had been a steady performer in his four seasons with the Dodgers with a 3.87 ERA, but he was also the starter pushed into the bullpen the past three postseasons. For the Dodgers, he was expendable. For the Twins, he’s an important part of their plans to end that improbably long 16-game postseason losing streak that goes back to 2004.

Maeda’s contract is a bit complicated as it features a low base salary of just $3 million per season (due to red flags in his medical reports when the Dodgers first signed him when he left Japan), but includes performance bonuses each season based on games started and innings pitched. Those bonuses can take his salary above $10 million per season (in a normal season), but that’s still a decent bargain for a solid starter like Maeda. The Twins probably can’t get a guy on the free-agent market for that money, but they can afford him.

Plus, they needed rotation help. Despite winning 101 games in 2019, the rotation was a mess by the time the postseason rolled around and inexperienced rookie Randy Dobnak, with just five career big-league starts, had to start the second game of the AL Division Series — which the Yankees swept them out of. The Twins quickly re-signed Jake Odorizzi as a free agent, re-signed Michael Pineda and then added veterans Homer Bailey and Rich Hill. Maeda was the final piece and now the Twins have depth behind staff ace Jose Berrios.

Even so, that depth hasn’t been enough. Pineda is still serving the rest of a PED suspension, Bailey and Hill each made one start before landing on the IL and Odorizzi missed a couple starts with back soreness. The Twins have had to resort to using relievers to fill in as starters. Even with Berrios off to a slow start, it has worked, primarily because Maeda and Dobnak (4-1, 1.42 ERA) have been so dominant. It’s a fun duo because Dobnak is a guy who relies on a sinker and weak contact. Like Maeda, he’s showing you can succeed without having to throw 95 mph.

The Twins have needed Maeda and Dobnak to step up, because the offense hasn’t been as imposing as it was in 2019, averaging 4.83 runs per game compared to the 5.80 last season. Nelson Cruz remains the ageless wonder, but every other hitter is underperforming what they did in 2019, with Mitch Garver (.143, one home run) and Miguel Sano (.172) particularly struggling. Josh Donaldson, recipient of the biggest free agent contract in franchise history, should help — once he returns from the injured list.

Watching Maeda’s outing, I think back to 1991, when the Twins brought in another starter they hoped would bring stability to the rotation. Jack Morris’ one year in Minnesota made him a Twins legend. I’m not expecting Maeda to pitch a 10-inning complete game in Game 7 of the World Series, but assuming Berrios figures things out and Maeda and Dobnak keep pitching like this, those three could be the Twins’ best rotation trio since Morris, Kevin Tapani and Scott Erickson pitched for those World Series champs.

I’d like to see the ninth inning situation get settled as Rogers and Sergio Romo are sharing the closer duties. The bullpen has actually been pretty good overall (fifth in ERA), with Tyler Duffey off to a great start with no runs and a 12-0 strikeout-to-walk ratio in nine innings and Tyler Clippard and Trevor May providing depth. Assuming the offense gets going — and it should get better, as the team’s BABIP is just .269 compared to .300 last season — I like this team better than the 2019 edition thanks to the improved rotation and bullpen.

The Dodgers didn’t give Maeda a chance to start in October. He’ll get that opportunity with the Twins.

Best bets for the six $1 million PFL title fights
Rangers trade enforcer Reaves to Wild for pick
USA, England have plenty to improve upon after scoreless affair in Qatar
Follow live: In first World Cup since 1986, Canada face Belgium
4,000 punches and counting: How we got to Chocolatito-Estrada 3