Dwayne Haskins Jr. used to weigh about 240 pounds. Now he’s 218. Thanks to photos and videos the Washington Football Team quarterback shared on social media this offseason, it’s clear his body has transformed, along with his mobility and confidence. He hopes to do the same for his game in 2020.

For that to happen, another transformation needs to take place. In coach Ron Rivera’s first news conference in January, he referenced Haskins’ talent and added that he wanted him to improve as a leader.

So Haskins organized workout sessions with wide receivers, picked the brains of veteran quarterbacks such as Houston’s Deshaun Watson and New England’s Cam Newton, and listened to teammates.

Haskins, who enters his second season with seven NFL starts, seven touchdown passes and seven interceptions under his belt, must show that his improved leadership and conditioning are not a mirage. If he does, then Washington, coming off a 3-13 season, can feel good about the game’s most important position.

Indeed, when Haskins met up with one of his personal quarterback trainers, Bryson Spinner, he arrived with a plan of attack for the offseason focused on every aspect of his play — from leadership to footwork to comprehension of the new offense.

For instance, because offensive coordinator Scott Turner spent the past two years with the Carolina Panthers, Spinner and Haskins went through all of the Panthers’ film. That impressed Turner when the quarterbacks began watching film via videoconferences.

In the past, Spinner was the one with an offseason plan.

“This is another stage of maturity we haven’t seen that we’ve been waiting to see,” Spinner said. “It will only get better from here the way he’s grown.”

Haskins, 23, wasn’t a leader as a rookie — appearing disinterested during a timeout in one game and missing the final snap of his first win to take a selfie with fans are examples — and numerous veterans wanted to see a better approach before they would rally to his side.

Another example, early on as a rookie, Haskins struggled to command the huddle. He wasn’t putting in the work away from the facility other players wanted to see. By season’s end, Washington’s veterans saw a change, and they say it has continued into training camp.

Washington right tackle Morgan Moses, whose locker is near Haskins’, has noticed a difference.

“When we break the huddle, even when he comes to playcalling, he’s not mumbling,” he said. “You can hear every word he says.”

“We understood. It’s a rookie coming into a huddle of grown men,” Moses said. “I told him, ‘Look man, when you get in that huddle, you go in there and whisper to us, it’s a respect thing. When you get in there and say, ‘Hey, man, this is the play on 2 — when you go in there with confidence, those guys are going to be locked in.’ I think he’s developed that mindset in his game.”

Stephen A. Smith sees a bright future for Dwayne Haskins with the Redskins compared to Daniel Jones with the Giants.

Haskins threw for 1,365 yards last season and improved down the stretch, but said he self-scouted his game and knew he needed to be more of a leader. It started with picking the right workouts — for instance, he targeted a weakness by working on short-area quickness via agility ropes and other drills — and working out with the right people.

He hung around teammates such as McLaurin and wide receiver Steven Sims Jr., and it was Haskins who coordinated their throwing sessions in various cities.

“That really helps with the chemistry,” McLaurin said. 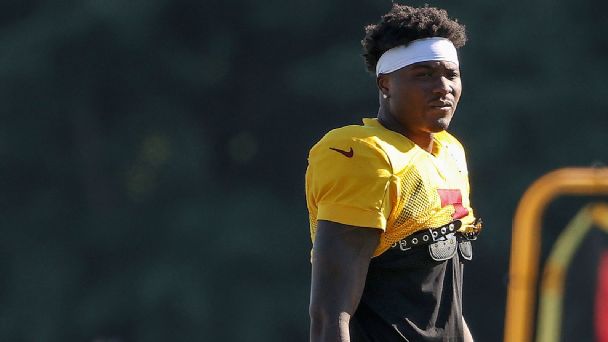 Get to know the sophomore quarterbacks before the 2020 season kicks off.
&• NFL execs rank them from 1-5 »
&• Leadership at top of Haskins’ list »
&• Jones spent summer getting chiseled »
&• How Murray improved in Year 2 »
&• Broncos get the real Lock »
&• How the Jags see Minshew »

Said Haskins: “With making better decisions, people start to take notice and gain some respect, so that’s how I’ve been leading.”

He’s worked often with Watson with another quarterback trainer, Quincy Avery. While doing so again in Los Angeles, they spotted Newton working out on an adjacent field. They hopped the fence and Watson, Newton and Haskins talked for a half-hour. Newton shared leadership tips, talked about what it was like to play for Rivera and ways to maximize his potential. The conversations resonated.

“It was just a great experience to share with them and knowledge about the position, about life and things we can help each other,” Haskins said. “That was a great conversation I’ll probably hold for the rest of my life.”

Newton’s main advice: Be yourself.

“It sounds cliché, but just going through what he went through in Carolina and in college for him, he’s been through a lot,” Haskins said. “Just hearing from him and listening to him about how he’s handled his situation and what was important for him for his growth.

“Then asking T.O. and Chad, who have worked with some really great quarterbacks in the past, ‘What’s this guy like? How’s QB Carson Palmer? How was [Donovan] McNabb when you were with McNabb? … And just hearing their perspective. Hearing how T.O. was when he was in San Francisco. Seeing how they grow and how they change and their process and seeing them being 40-year-old retired NFL football players.” 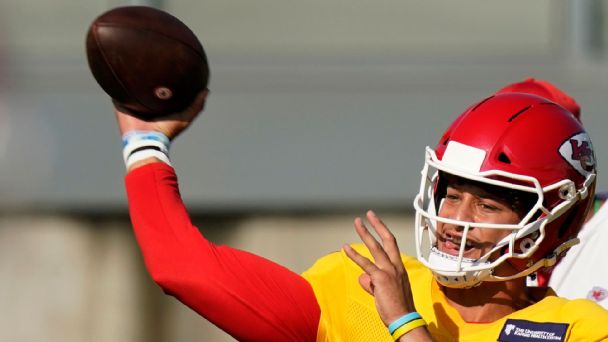 If Haskins truly wants to lead, it’s imperative that he can relate to a variety of different types of players — from aging vets to young stars and players who have gone through adversity. That’s a lesson he said his former offensive coordinator at Ohio State, Ryan Day, taught him.

“Being able to relate to different guys in different moments, in a game or in practice or a meeting,” Haskins said. “Knowing how to get across to someone even if it’s not the whole room. You have to be versatile in how you lead and also gain that respect. If you don’t have respect, no one’s going to listen to you or really follow you, so that’s all I’ve been trying to do is earn that.

“I’m just trying to be a great leader. If I can be a captain this year, that’s something I’m going to try to achieve.”

Mindset is a buzzword for Haskins. He not only talked to other players, he’s trying to emulate successful quarterbacks. It doesn’t happen in one offseason and Haskins has a ways to go. But he knows what he’s trying to develop: a presence. He didn’t have one last season.

“I’ve been just trying to master that same edge that a Tom Brady or Drew Brees has, [that] when he steps into a building you know he’s there,” he said. “Our offense needs a guy who’s going to take ownership and lead, and why not that be me?”

Which leads back to Haskins getting into better shape. In order to become a leader, he had to first put in the work. His physical transformation is a result of improved eating habits — “I just eliminated toxic stuff from my life,” he said without elaborating — and many two- and three-a-day workouts in the offseason.

He would lift weights in the morning, sometimes as early as 6 a.m. Later in the morning, he’d have a throwing session with Spinner that lasted up to two hours. They would do that at least three times a week and he would lift at least four days a week. On the other days, he would run. Spinner called it a seven-day grind.

Some of Haskins’ workouts focused on improving areas like his change of direction and his play outside the pocket. He’s also added strength and looks considerably more toned than even at the end of his rookie season.

But it wasn’t just to get in shape; it was to enhance Haskins’ game. He is a pocket passer who will occasionally run, but he isn’t going to truly threaten a defense. Last season, he ran 20 times for 101 yards, but 55 of those yards came on three runs.

“The biggest growth is his mobility, his short-area quickness in the pocket,” Spinner said, “his ability to move suddenly and escape and avoid trouble. He’s always been able to throw from the pocket, he always had a solid platform when he’d throw the ball.”

During offseason drills, Haskins would be in the pocket and a receiver would fall down on purpose, forcing him to leave the pocket.

“It’s a noticeable difference in his burst when he’s taking off and decides to go,” Spinner said. “It allows him to decipher what goes on downfield and he can decide what to do with the ball. It will allow him to be more dynamic. You can’t just say, ‘Let’s keep him in the pocket.'”

Last season, according to ESPN Stats & Information research, Haskins completed 10 of 20 passes for 91 yards outside the pocket.

“I love throwing from the pocket and making plays,” Haskins said. “But I feel extending plays … that can be a part of my game that can be stepped up a little bit. I’m looking forward to making some plays with my feet in Year 2.”

“Not being tired,” he said. “If your body is tired, your mind gets tired and if your mind is tired the ball goes to the other team. Just because you’re in shape doesn’t mean you’re a good player, either. But it is one thing in your control. It’s always a good place to start.”

That’s what Rivera wanted to see.

Based on an offseason focused on improving his leadership and conditioning, it’s clear Haskins listened.

Late in the offseason, he flew to Los Angeles for a three-day workout with Avery, Newton and Watson. His return was pushed back a day, forcing him to move a scheduled workout with Spinner from a Sunday to Tuesday. But when Haskins returned to Virginia that Sunday, one of the first things he did was call Spinner to lobby for a Monday workout.

“He’s taken that to heart and has done a great job,” Rivera said of Haskins. “He’s doing the things we need him to do, he’s being very professional about the way he’s handling himself and he’s really been very thoughtful in terms of his actions. That’s been a big plus.”

Reid confirms Mahomes will start vs. Bengals
Mahomes: ‘Didn’t feel good,’ but ‘battled through’
Why we might have to wait until 2024 to see Artur Beterbiev vs. Dmitry Bivol in a must-see matchup
NHL Power Rankings: Projecting playoff chances for all 32 teams
Casemiro lifts Man United, Bayern in crisis, Wrexham rock FA Cup: Weekend Review