Even the Champions League final didn’t seem to matter as much. A lack of occasion repeated across all major stadia, racing circuits and golf courses this summer.

So the delayed Tour de France this year has an important role to play.

Following the inevitable postponement from its original grand depart on 27 June to Saturday, the world’s greatest cycling race will be the first major sporting event to take place with fans back in their rightful place. Right by the action. Well, somewhere near to it.

Because even if organisers ASO wanted to divert fans to screening areas near the start and finish of each of the 21 stages, no sport which roams through countryside and over mountain ranges can completely stop those lining much of the 3,000 or so kilometres of roads.

And it is the passion of the fans that elite sport is so badly lacking right now. A passion, in this case, for cycling that means walking up to cold mountain tops, often in fancy dress, and get as close to the riders as you dare.

It could be a gathering even the most determined lockdown party animals would be proud of.

But is it one set to be gatecrashed by the coronavirus?

Many think ASO’s determination to hold the event is irresponsible, despite attempts to keep crowds at sensible levels. They think it is too big a risk as France battles an increase in coronavirus infections, with some areas put on high alert.

But, as ever, there’s a flipside – that this is seen as a brave, pioneering step back to normality, and a sporting event that best represents a perceived freedom of movement the western world currently laments.

“We’ll be under greater scrutiny than ever before,” said race director Christian Prudhomme. “This Tour will be a symbol of rebirth and economic recovery.”

Sure, autograph hunters at the team buses will have little or no luck, pushed back by the team bubbles which take riders and staff from their hotels to the buses and away from most of the media.

And the usual podium traditions are gone – no kisses, flowers or jerseys will be handed out.

But there have already been several races, leading up to the Tour, which have reported almost no problems with their bubble structure.

Everybody wants this to work, and believes in the efforts being made. But, as one team boss put it: “You have to have your head in the clouds if you think we’ll cruise though this next three and a half month period scot-free.

“There’s risks races could be cancelled, and the teams and organisers are aware the sport will look different. But already in cycling people are on top of their hygiene.”

Just as well, because if a team reports back two positive tests they could be expelled from the race. An even bigger outbreak could stop the Tour altogether.

And there have been concerns raised by the Bora-Hansgrohe team over the testing with one of their riders returning a positive result at a race earlier this week but a second test was negative.

What happened to the Brits?

If most weary participants and equally weary fans were dreading all this effort would end in Chris Froome atop the podium wearing an Ineos (nee Sky) jersey for a fifth time, now they sense another compelling reason to risk turning up at the roadside.

This year’s Tour line-up is without a genuine British contender for the first time since Sir Bradley Wiggins called a raffle on the Champs-Elysees after his win in 2012. Four-time Tour winner Froome is not going to be at the opening stage in Nice – he’s not ready to lead a team to victory this year after injuries caused by a horrific crash during the Criterium de Dauphine in 2019.

Froome, at 35, will instead contest the Vuelta a Espana in October – the three-week race where he made his name as a general classification contender 10 years ago.

Missing too is 2018 winner Geraint Thomas, similarly searching for form in recent warm-up races. Only a year younger than Froome, he’ll looking to prove he still has the strength to win a Grand Tour by contesting the rearranged the Giro d’Italia.

In fact the team which has won seven out of the last eight Tours de France, is in a real transitional phase. Ineos now find themselves with new backers trying to balance a chiefly British identity with staying at the very top of the sport.

As of this week they will be known as the Ineos Grenadiers. A new identity for a team still mourning the tragic loss of much-admired sporting director Nico Portal, who died of a heart attack aged 40 in March. 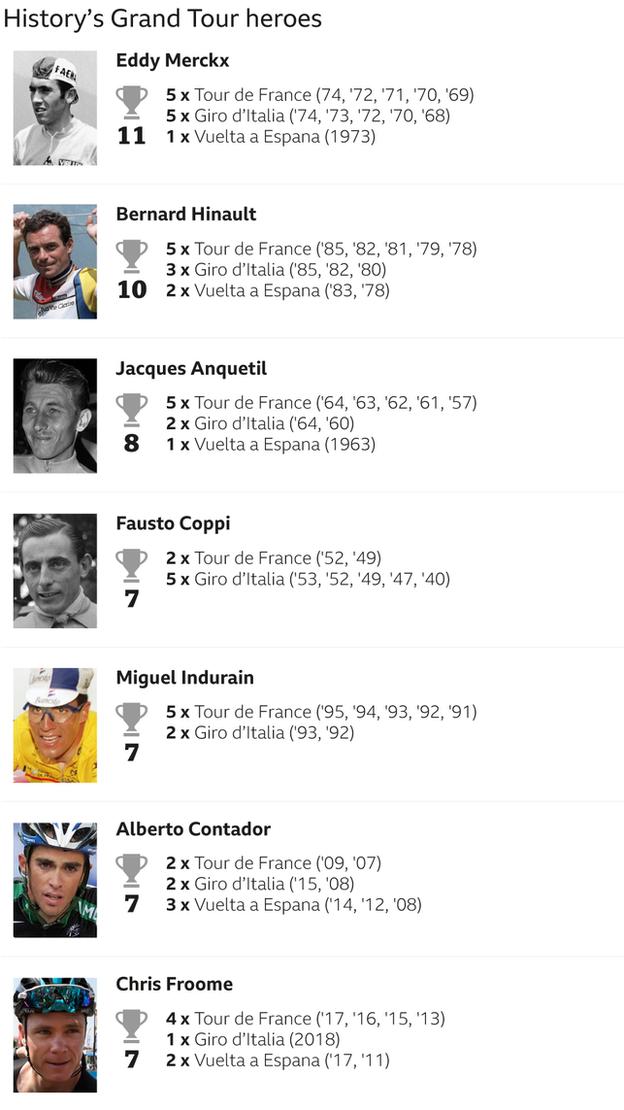 The most unpredictable Tour for years

Ineos undoubtedly have talent and eyes on the top prize though. Last year’s winner Egan Bernal is this year being backed up by a typically strong squad of domestiques who have their own accolades in cycling, headed by last year’s Giro d’Italia winner Richard Carapaz of Ecuador.

That’s Colombia and Ecuador. Welcome to the new Ineos. But Britishness is important to the team, proven by the signing of Adam Yates – the best British talent outside of Ineos alongside twin brother Simon – who will ride with the team from 2021.

After the exclusion of another legendary British Tour rider, sprinter Mark Cavendish, the UK’s only hope at this year’s race comes in the form of Yates for his current Michelton Scott team. He is a contender – but more likely for individual stage wins in the mountains rather the overall.

Bernal’s early season form was explosive, but it appeared to plateau a few weeks ago, eventually culminating in a back injury with saw him pull out of his the Criterium de Dauphine “to be cautious”.

He is expected to be fine, but riders who are fine don’t leave races early, and his drop off in intensity will be a concern.

But no rider ahead of this race has shown consistently pure form, perhaps because of the lack of preparation caused by the coronavirus pandemic.

What’s more of a concern for Brailsford and the rest of the peloton, is the Ineos-esque domination of the emerging Jumbo-Visma team.

Jumbo-Visma riders are now several bookies’ favourites to win stages and the race, as they have been hoovering up most of the significant stage and race victories with leader Primoz Roglic and young riders in frightening form such as Wout van Aert and Sepp Kuss.

French hopes of a first home win since Bernard Hinault claimed his fifth Tour title in 1985 appear to again rest on the shoulders of Groupama-FDJ’s Thibaut Pinot and the indefatigable Julian Alaphilippe of the Deceuninck-Quick Step team, while Astana’s Miguel Angel Lopez is another of the promising Colombians.

One of the hardest ever Tours?

The route is mountainous from more or less the second stage. And the race takes on a number of punishing climbs across the three weeks, including at the Tour’s highest point at Meribel Col de la Loze, 2,300m up on stage 17.

Stage eight sees the riders tackle the Col de Peyresourde in the Pyrenees – where Froome made his name in 2012 by putting Wiggins in the shade – and stage 15 includes a double ascent of the hors category Grand Colombier. So bad they made them do it twice.

In fact the race includes just one time trial this year – on the final competitive stage before the ride into Paris. And even that is in the mountains; this time finishing on the category one grind up to La Planche des Belles Filles.

As a result, the smart money is on Roglic or Bernal for victory, but not knowing which is the smarter money is exciting enough.

There are many dissenters who feel the Tour should not be going ahead, and who will be proven right if the peloton does not make it to Paris on 20 September.

But the sheer unpredictability of who will be there if the race makes it that far will attract those who really matter anyway. The fans.