While it’s common for fighters to call for title shots after key victories, it would be hard for observers to not at least think that Aleksandar Rakic will get one at some point after his performance on Saturday night.

Rakic, who is ranked eighth by the UFC, dominated Anthony Smith throughout their three-round UFC Fight Night main event at the UFC Apex in Las Vegas. Rakic pummeled Smith, a former light heavyweight title challenger, with leg kicks and had 12 minutes, 14 seconds of control time.

Rakic, who has now won 13 of his past 14 fights, said in his post-fight interview that he wants the winner of the Jan Blachowicz–Dominick Reyes bout for the vacant light heavyweight title. 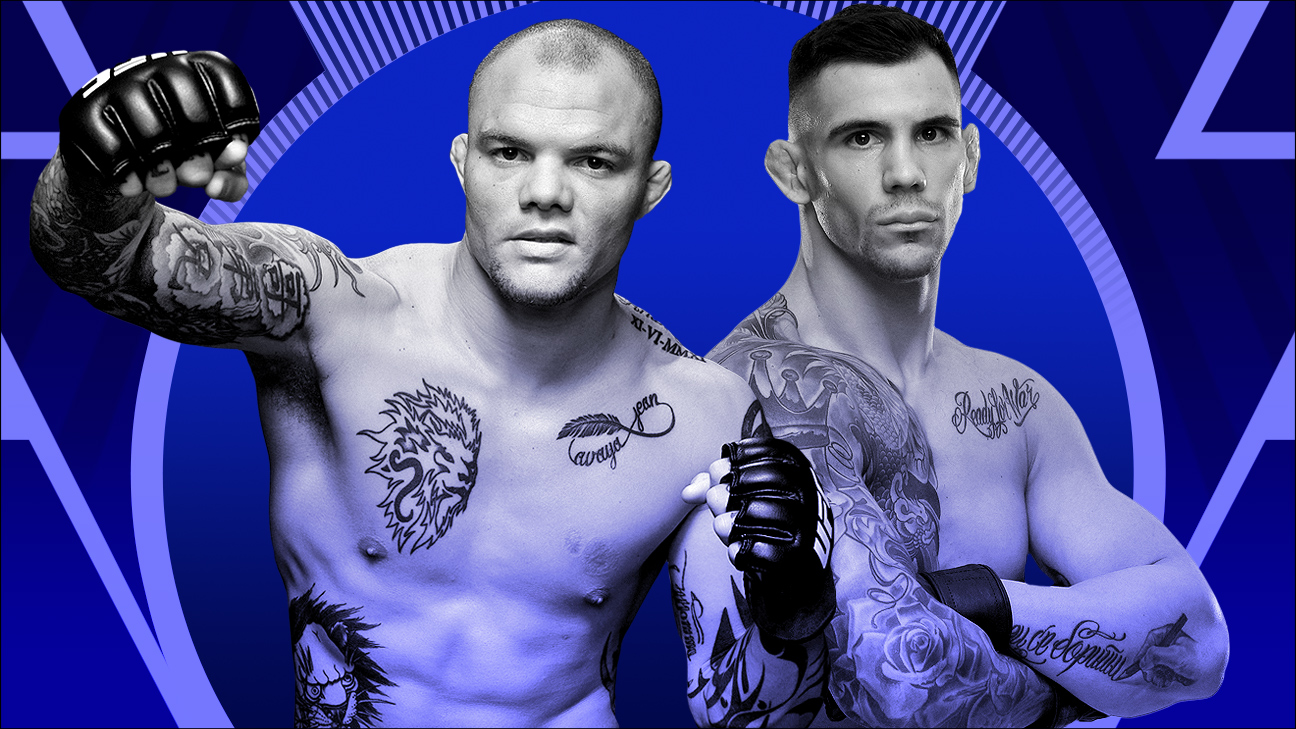 All fights from UFC Fight Night: Smith vs. Rakic will be available to watch on ESPN+.

Magny had what was likely the biggest win of his career against former welterweight champ Robbie Lawler. Magny consistently took the 38-year-old Lawler to the mat and even won the striking battle against one of the UFC’s all-time great sluggers, 121-17 in total strikes.

Grasso, meanwhile, moved up to flyweight and handled the hard-hitting Ji Yeon Kim for three rounds. Grasso is undersized for her new division, and the question now is can she consistently beat bigger opponents?

ESPN’s expert panel of Brett Okamoto, Marc Raimondi and Jeff Wagenheim takes a deeper look at those topics and more from Saturday night’s card, which saw the first four fights end in submissions.

Evaluate the performance of Aleksandar Rakic. Who’s next for him?

Rakic was dominant. He took Anthony Smith out of his game right from the start, softening him with resounding kicks to the head, body and especially the legs. That was no surprise. Rakic’s a former kickboxer who has shown vicious standup in the UFC. What did surprise was how he fared in grappling a jiu-jitsu black belt. Rakic looked strong and comfortable, opting to ignore multiple opportunities to get the fight back to standing, instead trying to finish Smith on the ground.

“I mean, everybody underestimates my wrestling and my grappling,” said Rakic.

Rebounding from a split-decision defeat to Volkan Oezdemir in December, which halted a 12-fight winning streak, Rakic seemed determined to show he belongs in the top 10 with this performance against Smith, who is No. 8 in the ESPN light heavyweight rankings.

“You know what’s next,” said Rakic “The belt is next.”

Whoa, not so fast. There’s still a bit of traffic ahead up the hill at 205 pounds. In less than a month, either Dominick Reyes or Jan Blachowicz will be crowned champ, and whoever that is should make it his first order of business to defend the belt against the winner of the bout between Thiago Santos and Glover Teixeira that happens in two weeks. Now, if Santos-Teixeira is a dud, OK, maybe Rakic gets the title shot. But I think a good next opponent for him would be another top-10 guy, Jiri Prochazka, who has won 11 in a row, including his UFC debut in July.

Who’s next for Anthony Smith?

Okamoto: Rest, man. Time with the family. Smith is (somehow) only 32 years old, although it sometimes feels like he’s nearly 50. He’s been doing this for so long, and he fights so frequently. But to me, it looks like he needs a break. No one — absolutely no one — will ever question Smith’s toughness. And even me suggesting he should take some time, he probably won’t appreciate. He’s the kind of guy who believes he’s always in a fight, always prepared to win the next one against anyone. But the fact is, he does have nearly 50 professional fights under his belt now. Going into this fight, he was less than four months removed from sustaining serious facial injuries during a loss to Glover Teixeira. I’m not even going to suggest a name for Smith, because I think he needs to take a long enough break where the entire division might reset. The dominant champ, Jon Jones, is gone. The division is in flux. Let it play out, heal up, and come back to a big fight. They’re still there for Smith, but if he keeps taking punishment against younger heavy-hitters, they won’t be anymore.

What’s your takeaway of the Neil Magny-Robbie Lawler co-main event?

Okamoto: We’re not giving Neil Magny enough credit. This is nothing new. This guy has 17 wins in the UFC — more than the likes of Matt Hughes, Josh Koscheck, Thiago Alves — and yet, Magny’s name never comes up in title contention, or even as one of the better welterweights of the last decade. Now, that first part is not completely unfair. As good and as consistent as Mangy has been, he hasn’t shown that real level of elite that would carry him to a title. Not yet, at least. But because of that, I think what he has done, and what he continues to do, gets dismissed. Case in point, this fight. I saw a lot of dismay over Lawler’s performance. To me, Lawler didn’t look shot. He looked like a guy who is no longer in his prime, yes, but he also looked like a guy who simply couldn’t get comfortable against the length and physicality of Magny, as well as an intelligent game plan. Personally, I’m inclined to give Magny full credit for this win, and I still think Lawler has a few fights left, even if he doesn’t have a run at the title.

Who’s next for Neil Magny?

Okamoto: The fight he was supposed to have this weekend: Geoff Neal. That was the fight, until Neal was hospitalized earlier this month with a nasty infection. In a way, it’s not really fair to Magny — has a very impressive performance against a former champion … and as a reward, you get the same fight you already had before that impressive performance? Doesn’t seem like much of a reward. But that said, it’s still the fight to make. Neal is flirting with that tag of “a guy nobody wants to fight” and Magny undeniably has the tag of “willing to fight anyone, any time.” Magny would be the perfect test for Neal, and Neal would offer some nice upside for Magny if he were to win it.

Who’s next for Robbie Lawler?

Raimondi: Lawler is 38 years old now and he’s done just about all there is to be done in MMA, including winning the UFC welterweight title. If he wanted to step away now and retire, who could really blame him? Lawler has lost four straight and five of six going back to his title loss to Tyron Woodley in 2016. I don’t think Lawler will hang up the gloves, though. It’s obvious he still has some fight in him. Neil Magny is a tough matchup for absolutely anyone at welterweight, so losing to him Saturday certainly doesn’t mean Lawler is toast. But it might be time to drop him down the rankings a bit and see how he does against an up-and-coming talent. I’d like to see Lawler face someone like Miguel Baeza next. Baeza is coming off a knockout of Matt Brown, a Lawler contemporary, in May. That should be a fun stylistic matchup and a test for both men to see where they are in the welterweight division.

Which fighter had the best submission?

Raimondi: From a pure technical perspective, Sean Brady probably had the slickest submission, a one-armed mounted guillotine win over Christian Aguilera. But I’d be remiss if I didn’t shout out Mallory Martin, who did some shouting of her own — screaming, really — after a rear-naked choke win over Hannah Cifers. We see plenty of rear-naked choke finishes. It’s the most common submission in high-level MMA. But this was more about how Martin did it. Cifers bludgeoned Martin in the first round with her fists. Cifers nearly got the finish and every judge gave her a 10-8 in the first. Martin’s comeback was incredible. She popped Cifers with a right hand in the second, took her down, got her back and the rest is history. Martin was emotional afterward, deservedly so. She imposed her will on a fight in which she was getting routed. There’s something to be said for that.

Who was the most impressive prospect?

Okamoto: Have to go with Impa Kasanganay. Sean Brady looked great and he looks ready to take on bigger names, but how can you be more impressed with anyone than Kasanganay — a guy who only started fighting professionally in 2019. His professional debut was in 2019 (!!) and here he is, a two-time winner on Dana White’s Contender Series and 1-0 inside the Octagon. He still has some development to go, of course, but he looked very comfortable on the big stage, comfortable in the pocket, comfortable walking forward on a guy in Maki Pitolo who was throwing heavy counter shots from the opening bell. Kasanganay isn’t as polished as a guy like Brady, but his ceiling is sky-high.

What is Alexa Grasso’s ceiling at 125 pounds?

Wagenheim: Grasso looked like a flyweight on Saturday night. She’s not the first to move up a weight class and appear right at home. Still, it’s a big positive that she was by no means outmuscled and didn’t conduct herself like the smaller fighter. So she belongs. Beyond that, it’s difficult to use a fight with Ji Yeon Kim as a true measuring stick for what we might expect when Grasso steps in with the iron of the 125-pound division. Grasso surely can compete with the bottom half of the top 10, and she has the tools to work her way up the ladder. How high is her ceiling? How high is anyone’s with Valentina Shevchenko sitting up top, looking invincible and all?