What Alistair Overeem is doing — especially at this stage of his career — you just don’t see every day. Veterans of his caliber are not always willing to accept this kind of a fight.

Overeem (46-18) will face Augusto Sakai (15-1-1) in the main event of UFC Fight Night on Saturday, inside the UFC’s Apex facility in Las Vegas. It will mark Overeem’s seventh time headlining a UFC event, compared to Sakai’s first. In fact, this is only the second time Sakai has been on a UFC main card. Just being in this position is a significant accomplishment for Sakai.

And that’s not a knock on Sakai; it’s a mere observation of where he’s at in his career. The 29-year-old is only two years removed from being a contestant on Dana White’s Contender Series and is a complete unknown to a significant portion of the UFC’s fan base. He has everything to gain on Saturday … and really nothing to lose.

Saturday’s UFC Fight Night main event features a legend taking on one of the heavyweight division’s most promising fighters. Alistair Overeem, who is attempting to make a final push at the heavyweight crown at 40 years old, will face Augusto Sakai. Overeem has won three of his past four fights, while Sakai has won six straight.

Why is Overeem fighting him then? This is the kind of matchup that, for the fighter in Overeem’s position, usually requires a lot of persuasion from the UFC. The thing about Overeem, however, is that he always takes these fights. His previous opponent, Walt Harris, would have catapulted into title contention with a win against Overeem. When Overeem beat him, Harris more or less stayed where he was.

A couple of appearances before that, Overeem fought an undefeated 26-year-old in Sergey Pavlovich. Pavlovich had plenty to gain in that contest, but when Overeem knocked him out in the first round, the same wasn’t true for the veteran. The win barely elevated Overeem’s career at all, if we’re being honest.

Overeem, 40, has accomplished nearly everything one can in combat sports, but his willingness to accept these kinds of high-risk, low-reward fights at the tail end of his career shouldn’t be overlooked. It’s commendable, and not every fighter does it. Frankly, there’s an argument to be made against it.

Overeem has earned some right to pick and choose his opponents. But he simply has not done that over the course of his career, and it’s never been more apparent than now. Saturday will mark the biggest fight of Sakai’s career. By far. It probably doesn’t register in the top 20 for Overeem. And the fact he continues to accept those circumstances, in the most volatile division in the sport, is commendable.

74: Percentage of significant strikes thrown by Overeem that land, making him by far the most accurate striker in UFC history. Next best is Tatiana Suarez, at 65.8%. No other active heavyweight reaches even a 60% connection rate.

6: Consecutive victories for Sakai. The past four of those have come in the UFC, tying him with Francis Ngannou and Curtis Blaydes for the longest active winning streak among heavyweights.

10: Knockdowns in the UFC for Overeem, tying him with Andrei Arlovski and Cain Velasquez for second most of all time among heavyweights, behind Junior dos Santos (14).

5.45: Strikes landed per minute in the UFC by Sakai, which would rank him third among active heavyweights if he had the required five fights.

65: Fights in the professional MMA career of Overeem, the second most of anyone on the UFC roster, behind Aleksei Oleinik‘s 74. Both men have won fights in four decades. Overeem, 40, has been a pro fighter since 1999, making his debut when Sakai was 8 years old. When Sakai made his debut in October 2011, Overeem was 47 fights into his career. 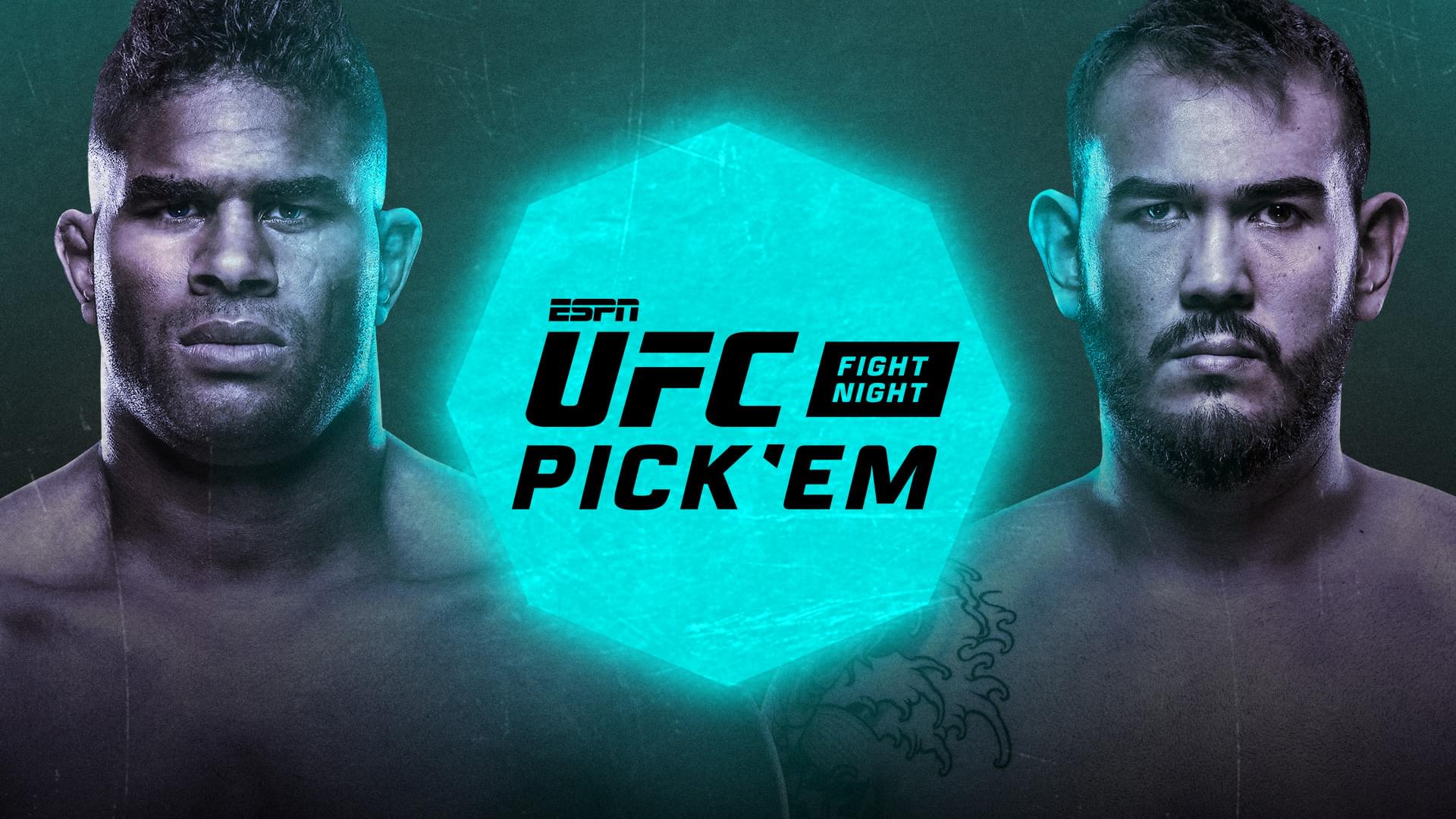 Play for a chance to win UFC 253 for FREE! Answer questions from UFC Fight Night on Sept. 5 LIVE on ESPN+. Make Your Picks

When Overeem has lost in recent years, he tends to lose big. See: Vicious knockout losses to Stipe Miocic, Francis Ngannou, Curtis Blaydes. But take a look at those names. Those guys he lost to are pretty good. Even though Overeem has been on the wrong end of some terrible knockouts in recent years, it’s been to only the very best of the division. Sakai is very solid, and the only loss of his career came in a close split decision. I think the five rounds favors him, but I have to go with Overeem. Overeem via TKO second round.

Nickname of the week

Marcos Rogério de Lima is known as “Pezão,” which is Portuguese for “Bigfoot.” Sorry, but no matter your shoe size, you can’t borrow Antonio Silva‘s trademark moniker and expect to earn our Nickname of the Week award. Cole Smith (“The Cole Train”) is obviously a jazz fan, and that doesn’t really jibe with the MMA musical demographic. Michel Pereira is “Demolidor” (or “Demolisher” in English), and if you’ve seen his high-flying fighting style, you kinda want something flashier from the nickname. Alexander Romanov is “King Kong,” and he’s a heavyweight and undefeated. Not bad. But let’s go with “The Butcher,” even if it makes Bartosz Fabinski seem like half of a pro wrestling tag team. Or maybe because of that.

2. Thiago Moisés faces Jalin Turner in a battle of Contender Series alums. Moisés is among 11 contract winners from the show’s one season that featured only Brazilian fighters. Turner fought on Season 2 of the U.S. version but did not receive a contract.

3. Montana De La Rosa, who faces Brazilian flyweight Viviane Araújo, is 4-1 inside the Octagon and has won three times by submission, one shy of the women’s record held by Gillian Robertson.

4. One fighter on the card enters with an undefeated record: 11-0 Moldovan heavyweight Alexander Romanov, who makes his promotional debut against 10-fight UFC veteran Marcos Rogério de Lima. Romanov has won all 11 fights by stoppage (seven by submission, four by knockout).