Much of the talk in recent years surrounding Holly Holm has focused on retirement. When will the 38-year-old Holm hang up the gloves?

After her performance on Saturday in the UFC Fight Night main event on Fight Island, that discussion could be about a title shot.

Holm, ranked sixth in the ESPN women’s bantamweight rankings, overwhelmed Irene Aldana for five rounds and earned a unanimous-decision victory in Abu Dhabi, United Arab Emirates. Holm, known for her striking, used five takedowns to smother Aldana, who entered the fight ranked fifth and a winner in four of her past five fights. 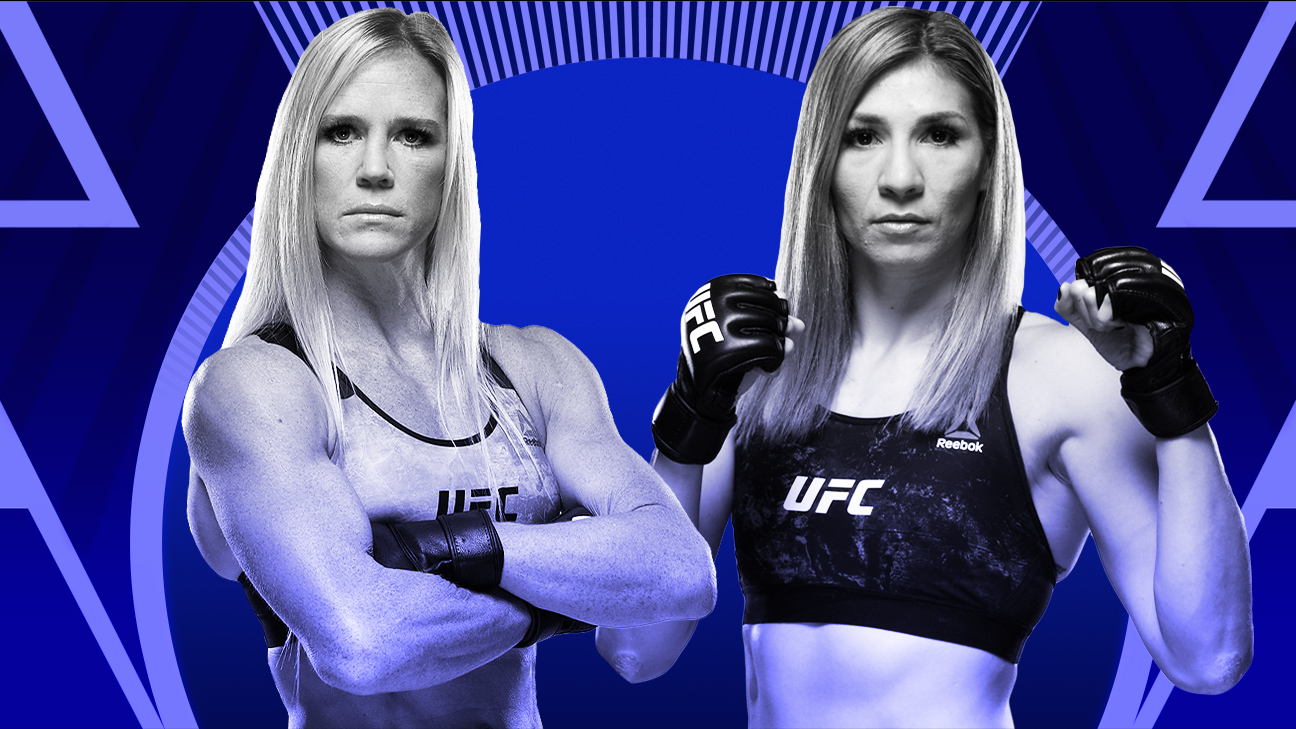 All fights from UFC Fight Night: Holm vs. Aldana will be available to watch on ESPN+.

Germaine de Randamie might have something to say about who gets the next title shot in the division, however.

The second-ranked de Randamie, who specializes in kickboxing, choked out the fourth-rated Julianna Pena in Round 2 on Saturday. De Randamie had last fought against champion Amanda Nunes and lost last December. But the 36-year-old de Randamie, who has won six of her past seven, called out Nunes after her win.

Another veteran had reason to smile on Saturday. Carlos Condit, who hadn’t fought in two years, snapped a five-fight skid by notching a unanimous-decision win over Court McGee.

How Holly Holm spoiled the party for Irene Aldana

Helwani: This was very dangerous matchmaking for the UFC. A Holm win would mean they would potentially be stuck with no solid title contenders for the women’s 135-pound champion, Amanda Nunes.

Make no mistake about it, this was set up to be a showcase fight for Aldana, who was coming off a great knockout win of the previously undefeated Ketlen Vieira.

An Aldana win would have been easy for the promotion because she is one of the few top-ranked bantamweights who hasn’t fought — and lost — to Nunes.

To recap: Germaine de Randamie, who picked up an amazing submission win Saturday night against Julianna Pena, already lost to Nunes, as has Holm and Raquel Pennington. And then there is Aspen Ladd, who is still recovering from knee surgery. Again, there just isn’t much out there.

Had Aldana won, they would have looked like geniuses.

And wouldn’t you know it? Holm won.

And not only did she win, it was vintage Holm. She looked incredible. Aggressive, motivated, quick, solid game plan. The entire body of work was extremely impressive. Heck, we even saw her score five takedowns, which is her career high.

Dare I say, it was the best she looked since her historic win over Ronda Rousey five years ago. I feel very confident in saying that. She looked that good. This was her second win in a row, which — amazingly — means she is on her first winning streak since she beat Rousey to improve to 10-0 (she lost her next fight — and the belt — to Miesha Tate).

And it’s even more impressive when you remember Holm turns 39 in 13 days and that was her 60th pro fight if you combine her boxing, MMA and kickboxing matches.

But Holly Holm is no stepping stone. At least not yet. Far from it. People keep talking to her about retirement and she keeps spoiling plans. It’s almost like she took all those annoying retirement questions and channeled it into pure aggression toward the younger Aldana.

As for what’s next, I don’t think she’ll get another title shot. I’d love to see THAT Holly Holm fight Nunes, but I don’t think it’s happening next. Plus, Nunes is fighting in December, a defense of her 145-pound title, so the UFC has some time.

I would book Holm versus Vieira, who won last week at UFC 253 against Sijara Eubanks. Do it in January/February. The winner of that fight would be worthy of a title shot. I also wouldn’t be opposed to a rematch against de Randamie.

And I know this will drive the Holm haters mad, because they love to complain about all her title shots, but you’re going to have to get over it. Holm is still very much a player and still very much in the title picture. You’re lying to yourself if you think otherwise.

In the words of the great Israel Adesanya, “Y’all must’ve forgot.” (Sorry, I had to.)

What did Germaine de Randamie prove with her first submission win?

Raimondi: Germaine de Randamie still has a lot left. That was never in doubt coming into Saturday night. After all, she pushed double champion Amanda Nunes in a women’s bantamweight title fight at UFC 245 last December. She was the first fighter in a long time to give Nunes trouble on the feet. With a guillotine choke win over Julianna Pena, de Randamie showed that — at 36 years old — she not only is still an elite fighter, but she’s actually getting better. The Netherlands native is evolving. De Randamie, a lauded kickboxer, has become more than competent on the ground, enough to dispatch a fellow division contender right in her wheelhouse. Pena is a great wrestler.

For a former UFC champion, de Randamie is perennially underrated. She was the first-ever UFC women’s featherweight champion and was stripped of the belt in 2017 when she wouldn’t fight Cris Cyborg, citing Cyborg’s past positive steroid test. It’s a shame that fight never happened — and probably never will — because it would have been a true test for Cyborg. De Randamie reminded everyone once again Saturday night that she’s one of the best female fighters on the planet, in two divisions.

Who are three possible opponents for Carlos Condit’s next fight?

Okamoto: You know, I thought Carlos Condit looked alright Saturday night. Right? Any time you’ve got a guy coming in riding five consecutive losses, zero wins in five years, a near two-year layoff, in his 44th pro fight — you tend to expect the worst in those situations. But once Condit knocked down Court McGee with that right hand at the end of the first round, he came alive. He was hanging in the pocket, his timing looked good, he was versatile in his offense. It was great to see.

Now, three ideas for what’s next. Nick Diaz is an obvious one. Keep in mind, there are about a billion options for Diaz if he does fight in 2021, but Condit has to be considered near the top. They fought for the UFC’s interim title in 2012. Condit won, via “baby leg kicks” according to Diaz. This fight also bore the classic, “We’re throwing spinning s— now” line. Plenty of history. Sign me up.

Speaking of history. Matt Brown. These two were supposed to fight in 2013 and 2018, but both times it fell through due to injury. And the sport’s fan base was crushed each time. If you’re a longtime fan of MMA, there’s a spot in your heart for Condit vs. Brown, and it will probably always be there. Brown himself mentioned on Twitter shortly after Condit won that he’s up for the fight. I’m up for it, too.

Once I’m fully healed up I think it’s time for me and @CarlosCondit to fight!

Robbie Lawler. Gotta be, right? Probably the greatest fight of Condit’s career. He is a fighter known for leaving everything he’s got in the Octagon, and no fight of his career epitomizes that more than his title fight against Lawler at UFC 195, which he lost by decision, but many believed he won. These two very well might be at the end of their careers — honestly, I think fighting each other could bring out the absolute best in them. That magic of nostalgia and familiarity. This is probably my No. 1 choice, actually. But it could all depend on how Lawler fares against Mike Perry in November.

Chun sees lead shrink to 3 at Women’s PGA
LeBron ’20-’21 Logoman card sells for $2.4 million
Ranking the fights at UFC 276: Two title fights plus Sean O’Malley prepares to put on a show in Vegas
Evaluating Russell Wilson and the Denver Broncos after minicamp
Lightning’s Point to miss Game 6, his 4th straight