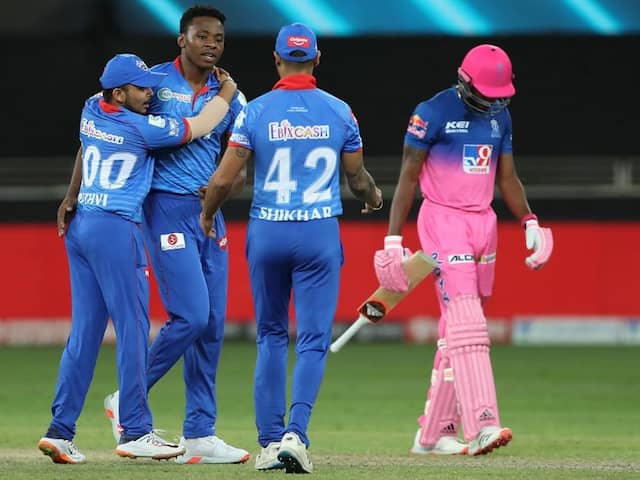 
Delhi Capitals beat Rajasthan Royals by 13 runs on Wednesday in Dubai to go on top of the Indian Premier League (IPL) 2020 points table. Half-centuries from Shikhar Dhawan and Shreyas Iyer helped Delhi set a 162-run target for the Royals, before an all-round bowling performance saw them restrict Rajasthan to 148 for the loss of eight wickets in 20 overs. DC now have 12 points from eight matches, while RR stay seventh with six points from as many games.

DC are now above Mumbai Indians and Royal Challengers Bangalore, who have 10 points from seven games each.

It was a game for the fast bowlers, as Jofra Archer took three for 19 to move up to second in the race for the Purple Cap. However, DC’s Kagiso Rabada stays on top of the wicket-takers’ list this season, as he took Archer’s scalp to improve his tally to 18.

Archer, with his three-wicket haul, now has 12 scalps in the season, as the English pacer looks deadlier with each passing match, despite the Royals’ struggles.

Behind Archer, Mumbai Indians’ pace duo of Jasprit Bumrah and Trent Boult have 11 wickets apiece, while Anrich Nortje joined Rashid Khan, Yuzvendra Chahal and Mohammed Shami in the list of bowlers with 10 scalps to their names.

DC captain Shreyas Iyer continued to lead his team from the front in terms of runs, with his 43-ball 53 taking him to fourth in the race for the Orange Cap.

Tyson Fury and Jake Paul agree to $1 million bet
Ex-NFL DT Siragusa, ‘the Goose,’ dies at age 55
MLS Watchability Rankings: The most entertaining clubs, and their European equivalents
Andreescu, Halep through to Bad Homburg semis
Chun shoots 69 to lead by 6 at Women’s PGA