Organisers of the Tour de France have announced the route for 2021, which includes a double ascent of the iconic Mont Ventoux.

Cycling’s biggest race will start on 26 June after this year’s event was delayed by the coronavirus pandemic.

The race’s Grand Depart is in the north-west city of Brest and ends in Paris on the Champs-Elysees on 18 July.

This year’s edition was won by 22-year-old Tadej Pogacar following one of the most dramatic finishes in history.

Slovenian Pogacar of UAE-Team Emirates beat compatriot Primoz Roglic of Jumbo-Visma in a penultimate-stage time trial after Roglic and his team had dominated the race for three weeks, winning by nearly a minute.

The 2021 race features two time trials, on stage five from Change to Laval and the penultimate stage from Libourne to Saint Emilion.

The double assault on Mont Ventoux occurs around halfway through the race on stage 11 – a 199km run from Sorgues to Malaucene. There are also five mountain stages in the Pyrenees during the final eight days.

The Tour is one of the few major sporting events this year to have been held in front of fans as road cycling takes place on public roads, allowing spectators to make their own way to vantage points along the course.

Organisers ASO introduced pre-race Covid-19 testing for team ‘bubbles’ and testing on both of the race’s rest days, with several staff leaving the race after posting positive tests, but no riders were affected.

Race director Christian Prudhomme was one of those who revealed a positive test, but recovered to lead the race for the final week.

Another battle of the Brits?

The race could see a mouthwatering battle between British riders, as four-time winner Chris Froome could come up against Tao Geoghegan Hart.

Froome is expected to contest the race for his new team Israel Start-Up Nation, after Ineos Grenadiers decided not to renew his contract in August and overlooked him for the Tour this season.

Froome, 35, who signed a multi-year deal with his new team, joined specifically to try to become only the fifth man to win a fifth Tour, alongside Eddy Merckx, Miguel Indurain, Bernard Hinault and Jacques Anquetil.

The east Londoner, 25, is not guaranteed to contest the Tour, but his form and adaptability in Italy proved he could cope with a challenge of cycling’s greatest race, as Ineos look to reaffirm their grip on a race in which they have triumphed seven times in the past nine years.

Geoghegan Hart will be in the running alongside other top Ineos riders, including 2019 winner Egan Bernal, who abandoned this year’s event after losing more than seven minutes to Roglic on stage 15.

And 2018 winner Thomas, 34, will also want to try to contest the Tour, as will Ineos’ other Grand Tour winner Richard Carapaz, who currently leads the Vuelta a Espana by 10 seconds over Roglic.

Other high-profile Britons in contention to take part include Ineos’ new signing for 2021 Adam Yates, his twin brother Simon – who remains at Mitchelton-Scott – and Hugh Carthy of EF Pro Cycling, who won Sunday’s mountainous climb up the Angliru, near Oviedo, in the Vuelta a Espana. 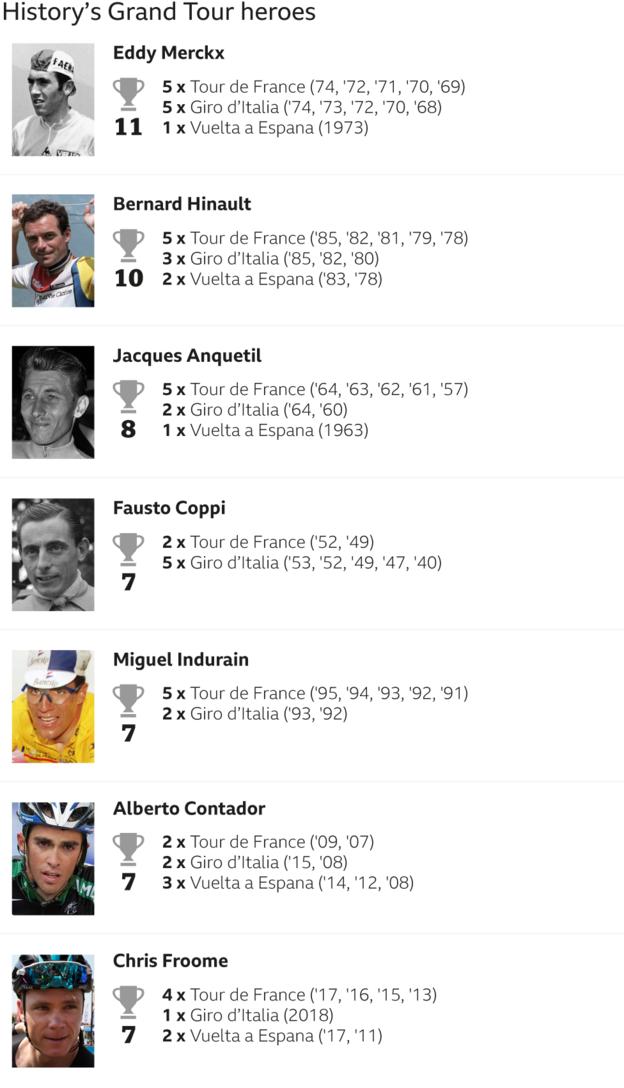