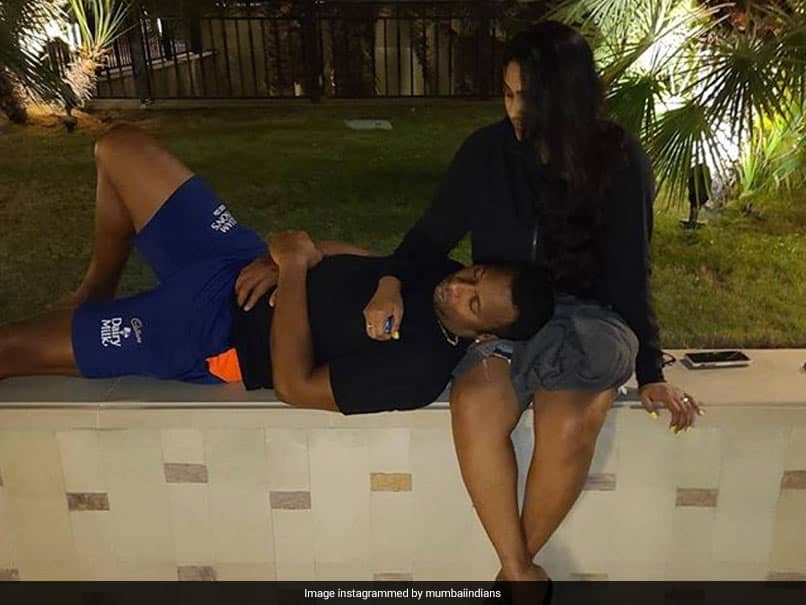 Kieron Pollard is in the UAE with his wife Jenna for the IPL 2020.© Instagram


Mumbai Indians, defending Indian Premier League champions, took to Instagram on Saturday to share a picture of their West Indies all-rounder Kieron Pollard chilling with his wife Jenna ahead of the summit clash. “Sshhh…Calm before the (storm emoji) on Nov 10th,” the image was captioned on Instagram. Soon after the Mumbai-based franchise posted the picture, fans flooded the comments section with heartwarming messages for the all-rounder. Mumbai had defeated Delhi Capitals in the first Qualifier and booked a place in the final of the tournament. They will now face the winner of second Qualifier which will be played between Delhi Capitals and SunRisers Hyderabad on Sunday.

“They look cute,” another one joined in.

Pollard has played a pivotal role this year in Mumbai’s success. The all-rounder has smashed 259 runs at an astonishing strike rate of over 190 and averaged 64.75 during the league phase of the T20 league.

Pollard has also chipped in with the ball whenever required by the defending champions and bowled economic spells in the middle overs.

The West Indian also took over the captainship role when Rohit Sharma had to sit out for a few games due to a hamstring injury.

In the first Qualifier, Rohit Sharma and Pollard both scored a duck but despite both of them missing out with the bat, Mumbai posted an imposing total of 200 for five from their allotted 20 overs.

Mumbai Indians finished the league stages of the cash-rich tournament at the top of the points table with 18 points.

The Rohit Sharma-led MI are gunning for a record-extending fifth IPL title this year.