ESPN’s panel of Ariel Helwani, Brett Okamoto, Marc Raimondi and Jeff Wagenheim break down the biggest stories coming out of Saturday’s UFC Fight Night card, including a look at Glover Teixeira‘s third-round submission of Thiago Santos and what it means.

Eight or so days ago, if you would have asked me who is next for the winner of the Glover Teixeira vs. Thiago Santos main event on Saturday, the answer would have been a no-brainer:

Why, it would be light heavyweight champion Jan Blachowicz, of course. 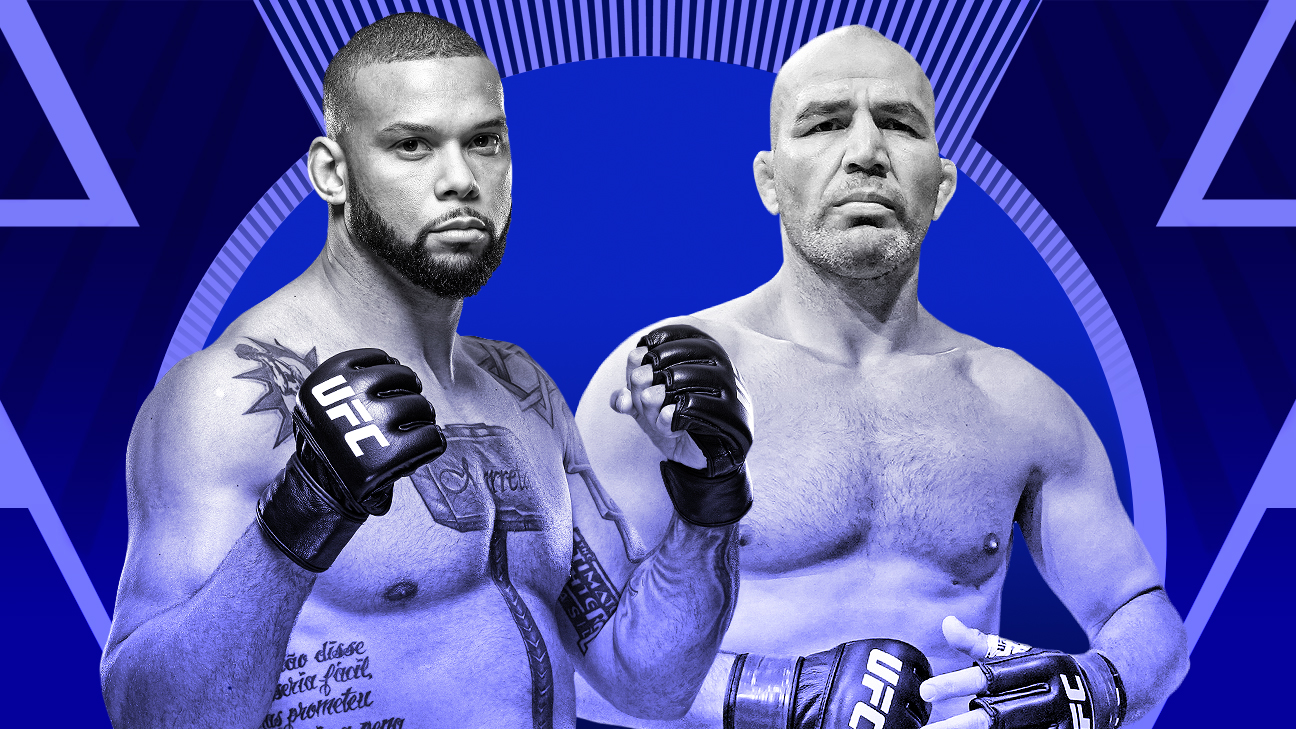 All fights from UFC Fight Night: Santos vs. Teixeira will be available to watch on ESPN+.

Following that revelation, both Adesanya and Blachowicz told us later in the week that they would likely meet in the first quarter of 2021, though the fight isn’t signed just yet.

Truth be told, the timing of this news removed a lot of intrigue from what should have been a No. 1 contender fight on Saturday night. The fight was still great on paper, but the stakes were greatly diminished.

And that’s a shame, especially after seeing what ultimately transpired.

Make no mistake about it: Glover Teixeira deserves to fight for the belt next. He’s won five fights in a row, and four of those five wins have come via finish.

“I heard him, I agree with him, and I’m taking him serious.”

On the #UFCVegas13 post show, @danawhite tells @laura_sanko that he heard @gloverteixeira call for a title shot and says “he’s not wrong.” pic.twitter.com/qX3JokLm2r

It looked like he was going to get knocked out quickly in Round 1, though in true Teixeira fashion, he weathered the storm early, fought off another major flurry in the third round, and turned it all around to submit the hard-hitting Santos via rear-naked choke.

What a fight. What a win.

If not for last week’s announcement, the entire MMA community, which rarely unanimously agrees on anything, would no doubt be unified by the idea right now that Teixeira should fight Blachowicz next for the belt.

To be honest, I kind of think they are right, regardless of the announcement of Blachowicz-Adesanya. And what a story that would be.

The 41-year-old Teixeira fighting for the title seven years or so after he lost his first and only title fight to Jon Jones in Baltimore at UFC 172. That loss snapped a remarkable 20-fight winning streak for Teixeira, and, considering the one-sided nature of the bout and Jones’ light heavyweight dominance, it seemed like a long shot that Teixeira would sniff a title shot again.

It seemed like an even greater long shot when Teixeira lost his next fight to Phil Davis and later got knocked out by Anthony Johnson and Alexander Gustafsson.

I remember thinking the end was near after the Gustafsson KO. Teixeira took a lot of damage in that one.

But as Texeira reminded us after his win on Saturday, and in the words of the great Rocky Balboa, “It’s not how hard you hit; it’s about how hard you can get hit, and keep moving forward.”

So, Teixeira continues to move forward. But where is he going?

Let’s say the UFC locks in Blachowicz vs. Adesanya. Let’s say Adesanya wins. He’ll either move back down to 185 or fight Jon Jones next, right? Then what happens to Teixeira? That scenario would be a nightmare for him, considering time isn’t on his side at his age.

Now, let’s say they move forward with Blachowicz vs. Adesanya in March or April. And let’s say Blachowicz wins. I suppose they can do the fight in late summer 2021 or so. Texeira would be nearing 42 by then, though. That doesn’t seem fair to him, though I doubt he’ll complain despite having a strong case.

Remember, Teixeira’s UFC debut was delayed for years due to visa issues. The man knows a thing or two about patience. It sure would be nice to see his patience and perseverance rewarded, especially after the way he won on Saturday, but he might be out of luck for now.

Unfortunately, in this game, nice guys — and none are nicer than Teixeira — don’t always get what they deserve.

So if thing remain on the current path, who’s next for Teixeira after his fifth straight win? Would someone like fourth-ranked Aleksandar Rakic suffice? Tough sell, right? We ultimately don’t know, but the real best answer is a no-brainer.

Who had Saturday night’s best finish?

Quite a few to choose from on Saturday — good ones, too. Unique ones. A forearm choke from heavyweight Alexandr Romanov? First one since July 1997?! Max Griffin nearly severing Ramiz Brahimaj‘s ear with an elbow? Darren Elkins with a much-needed rear-naked choke in the third round? (a fight I believe he was on his way to losing had he not wrapped that up). I mean, these aren’t your every day, run of the mill finishes. I have to say though, and I expect some pushback on this, but for me, it was Giga Chikadze‘s head kick knockout of Jamey Simmons. And I say that because that is, by far, the one I’m most excited about — because it was Chikadze living up to his very tantalizing potential.

There is a reason the UFC put this guy on Dana White’s Contender Series in 2018, and there’s a reason they signed him just one year after that appearance, even though he lost on the show. He’s extremely talented. He was the biggest betting favorite on Saturday’s card, so he was meant to do something spectacular. And he did. That head kick finish, and the moments leading up to it in which he set it up, were beautiful — and, hopefully, a sign of things to come. And then he follows it up by asking for an all-violence matchup against Jeremy Stephens? We all approve, Giga.

Things were already very interesting in the UFC strawweight division. And now this: Another excellent Chinese fighter in Yan Xiaonan has made her way up the contender rankings. Yan defeated the always solid Claudia Gadelha by unanimous decision Saturday night, and is now 6-0 in the UFC. Yan, ranked No. 8 in ESPN’s strawweight rankings, has not lost in 10 years and is very much now in the title mix. The UFC strawweight champion Zhang Weili is, of course, the first China-born fighter to ever hold a UFC title. It is very much a possibility that the UFC could be looking at an all-China title fight — Zhang vs. Yan — in 2021. Former champion Rose Namajunas is next up for Zhang, almost surely. But if Zhang can win that one? Yan is surely a credible challenger, though she might need one more win.

If not for COVID-19, the UFC might have been eyeing a Zhang vs. Yan matchup in mainland China. That is doubtful any time soon. But that fight itself is very much in play for next year, as long as Zhang remains champ.

No need for the UFC to rush Alexandr Romanov

Alexandr Romanov has had 13 career fights and has won them all. Not one of his opponents has heard a final horn, as the Moldovan has nine submissions and four knockouts. But the most notable number of all: 29, which is Romanov’s age.

He fights at heavyweight, a division in which contenders tend to reach their prime well into their 30s, even into their 40s. So Romanov has time for a slow build, and that is good for an athlete who has been a pro for less than three years and has been in the UFC for less than two months. Saturday’s first-round submission of Marcos Rogerio de Lima was impressive, as was his submission win over Roque Martinez in his UFC debut in September. But neither Martinez nor de Lima is an adequate gauge for what we might expect from Romanov’s future as he climbs the ladder of contenders.

What we know at this point is that Romanov will aggressively pursue a takedown, and if he gets it, he will waste no time before going for a finish. And he’s creative in that pursuit. He elicited the tapout from de Lima with a forearm choke, a maneuver that had not been used successfully in the UFC since 1997. It’s not something his future opponents will have seen much in the training room.

Romanov has to shore up a Plan B, though, for those nights when a takedown does not easily come. He did not spend a lot of time on his feet on Saturday, but de Lima outlanded him 12-0 when they were fighting from distance. That could pose problems for Romanov as the opponents become more and more heavy-handed. But he has time to work on that. Years.