PHILADELPHIA — Speaking Thursday about his development as a leader, Philadelphia Eagles quarterback Carson Wentz noted he is entering his fifth NFL season, and got caught on that thought for a moment.

“It still seems crazy to say it’s my fifth year,” Wentz said, breaking into a smile as the next thought popped up. “Definitely feel like a veteran now.”

Looking at the differences between this summer and last shows the accelerated timeline NFL players work on, and how much has changed in a calendar year for Wentz, who suddenly finds himself smack in his prime and with plenty to prove.

Start with the physical. Last year, Wentz arrived at training camp noticeably slimmed down, the product of a refined gluten-free diet and a reimagined workout regimen that focused on mobility, flexibility and range of motion instead of “the high school/college mindset of just lift, lift, lift, work hard, work hard.”

His home gym clearly got plenty of use over the past few months, as Wentz arrived at the Eagles’ facility this week looking more muscular than he has ever been.

“The last couple offseasons I was dealing with injuries and trying to bounce back from injuries. This offseason, I was really able to get after it and work out a little harder in the gym and all those things,” said Wentz, who was shut down in 2018 with a fracture in his back and the year before that with torn ligaments in his knee. “I haven’t gained anything insane for weight, but I’ve definitely gained some weight and feel good where I’m at.”

Some have joked that it’s just a matter of adding “dad strength.” Wentz, who is 6-foot-5 and was listed at 237 pounds last year, became a father in April, an event that instantly changed his perspective on life, he said. Wentz and his wife, Maddie, talked and prayed a lot about him returning to work amid the coronavirus pandemic, and feel good about his decision to play in 2020.

One of the oldest teams in the league started a youth movement this offseason, with veterans leaders such as safety Malcolm Jenkins departing as a new wave of talent arrived. It included Jalen Hurts, the gifted signal-caller out of Oklahoma whom the Eagles shockingly selected in the second round of the 2020 NFL draft. The Eagles remain committed to Wentz, but the addition of Hurts brings a new dynamic to the QB room, which included Nate Sudfeld, Cody Kessler and Clayton Thorson this time last year. How could it not feel like the temperature has been turned up a notch or two? 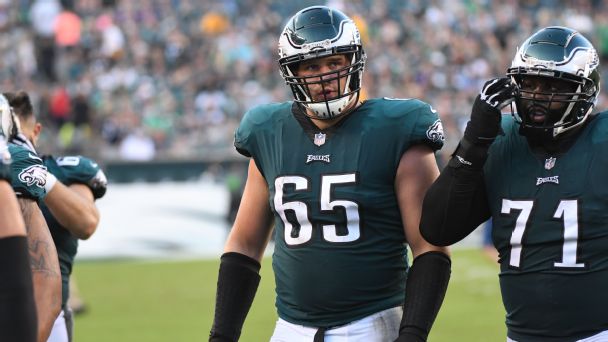 “I’ve been fortunate enough to be surrounded by some really good quarterbacks, and that’s not going to change my approach to the game personally or how I help him,” Wentz said of Hurts. “I’m going to be here for him, help him to understand the ins and outs of the game and ultimately do what I can to help the team, and that’s to help bring him along as well.”

The new wave also brought three speed wide receivers in Jalen Reagor, Quez Watkins and John Hightower by way of the draft. Wentz expressed excitement about their arrival. And why not? The trio promises to add an explosive element to an offense that Wentz had to push like a boulder uphill far too often in 2019.

Starting around Thanksgiving last season, right before Wentz really got that rock rolling, players began voting for the 2020 NFL Top 100 list, a process that stretched over six weeks. Wentz was left off the list. He was No. 96 in 2019, way down from his No. 3 finish following his near-MVP campaign the year prior.

It’s one more thing that can be used as fuel for what could prove to be a defining season for the suddenly veteran Carson Wentz.

“You’ve seen me over the years: I usually don’t get too caught up in a lot of that stuff. When I see it, I usually wish I didn’t see it or hear about it,” he said. “But you can always use anything and everything just as a little bit of extra motivation. So it is what it is, it’s voted on by the players. I’m not going to let that cause me to lose any sleep or anything. But I do look forward to going out this year and showing what I can do with my teammates.”