Who are the new favorites to make the NBA playoffs as the No. 8 seed in each conference? Can anybody get past the Los Angeles Lakers and LA Clippers in the West? Who will be the best rookie in the bubble?

After the first weekend of the 2020 NBA restart, we’re starting to get a clearer picture of the postseason race and all 22 teams in Lake Buena Vista, Florida. The first four days have been full of surprises, clutch performances and a few painful losses.

But what’s next? Our NBA experts weigh in on eight of the biggest trends and questions, answering if each development is real or not.

Real or not: The Grizzlies are still favorites to get the final West playoff spot

I was much more confident in Memphis’ odds to hang onto the West’s final playoff spot before bubble play began with the Grizzlies suffering tight losses to the two teams closest to their tail. But I’m still saying real and going with Memphis.

As inexperienced as the Grizzlies are, my hunch is Ja Morant is too mentally tough to allow them to crumble in the seeding schedule and stumble into ninth place. The play-in scenario set-up — the ninth-place team would have to win two in a row to claim the postseason bid — makes it a long shot for the team that finishes eighth in the standings to exit before the playoffs begin.

Then again, it’s never wise to bet on the San Antonio Spurs missing the playoffs under any circumstances. After all, the Spurs have been postseason participants 22 years and counting and have somehow positioned themselves to sneak in again, only trailing Memphis by two games. — Tim MacMahon

Real or not: The Washington Wizards can’t make this a real race for No. 8

Real. Even if the Wizards had beaten the Nets on Sunday, they were facing an uphill climb. Now, the math doesn’t add up.

With the loss to Brooklyn, Washington is three games back of even forcing a play-in game with six games left to play. If the Nets go winless in those six games, Washington would have to go 3-3. The Wizards’ remaining schedule consists of the Indiana Pacers, Philadelphia 76ers, New Orleans Pelicans, Oklahoma City Thunder, Milwaukee Bucks and Boston Celtics. Anything is possible, but it is hard to find three wins out of that group.

And if the Wizards do beat the odds and get to within four games of Brooklyn, they would have to win back-to-back games. That’s all extremely unlikely. — Bobby Marks

Real or not: Raptors-Bucks Pt. II is happening

Real easy to imagine. Last spring, the Bucks and Raptors treated us to a high-level chess match whose momentum flipped in an instant, with the Raptors tightening the vise on Giannis Antetokounmpo and swamping the Bucks at the point of attack.

In the Year of the Bubble, the Milwaukee end of the sequel equation is easier to balance because there are few matchups in the early bracket against which the Bucks’ combo of length, range, skill and physicality won’t be a decisive favorite. The Bucks have been honing their systems on both sides of the floor for two years. “Culture” is an attribute that’s ascribed too often in the NBA, but the ease with which Milwaukee moves through its day-to-day routine has the manner of a champion.

While Boston would be a very tough out for Toronto, the Raptors are picking up where they left off — witness the gutsy victory over the Lakers on Saturday, when they gave up a measly 92 points in 103 possessions. Their versatile, fire drill of a defense that strangles opponents is an improvement on last season. A rematch with Milwaukee would be an entirely different affair without Kawhi Leonard, but the Raptors have somehow built a team that, so far, seems as resilient as the one that shocked the world. — Kevin Arnovitz

Real or not: No one can get past the Lakers and Clippers in the West playoffs

Don’t be fooled by the Lakers’ ugly finish and shooting against Toronto on Saturday night. The rest of the West should not be able to derail an all-LA bubble battle in the conference finals.

Sure, unforeseen circumstances could impact matters. When it comes to strictly basketball, Houston definitely has the offensive firepower but it is hard seeing them muster enough defense to beat the Lakers or Clippers four times. Denver has a strong core but is missing key contributors and dealing with inconsistency. Utah, OKC and Dallas have some potential, but not enough to steal four games in a playoff series.

Look at what the Clippers have been able to do so far — battling the Lakers until the final seconds and crushing the Pelicans — without Lou Williams and Montrezl Harrell. And while the Lakers have looked a little vulnerable, LeBron James and Anthony Davis have only lost twice to one Western Conference team this season, and that’s the Clippers. The Rockets might have the best shot of the other contenders, but it’s hard seeing anyone outside of the two LA teams representing the West in the Finals. — Ohm Youngmisuk

Real or not: The Mavericks’ crunch-time woes will sink them in the playoffs

Real, but also not. Clutch performance is far too random to assume that the Mavericks’ struggles down the stretch will carry over. Over the 23 seasons in the NBA Advanced Stats database, teams’ clutch offensive rating (in the last five minutes of games within five points) during the regular season has explained just 2% of their playoff rating.

Consider the 2011-12 Philadelphia 76ers, who averaged 89.9 points per 100 possessions in clutch situations during the regular season, finishing as the eighth seed. In the 2012 playoffs, the Sixers’ clutch offensive rating improved to 136.4 — best of any team with at least 50 clutch possessions since 1997 — as they got within a game of the conference finals.

However, Dallas’ clutch woes will probably consign them to the seventh seed and a first-round matchup with the Clippers. In that sense, the late-game problems we saw on Friday — costing them a big win over Houston — will ultimately sink their playoff hopes. — Kevin Pelton

Real or not: Jayson Tatum will regularly repeat his highly-efficient Sunday performance in the playoffs

Still to be determined. At age 22, Tatum has all the gifts to become one of the league’s premier scorers, but he’s not quite there yet — at least consistently.

This season, he’s been able to increase both his activity and his efficiency from downtown, making an impressive 39.4% of his 7.1 attempts per game, while simultaneously picking better shots inside the arc. The results are encouraging … 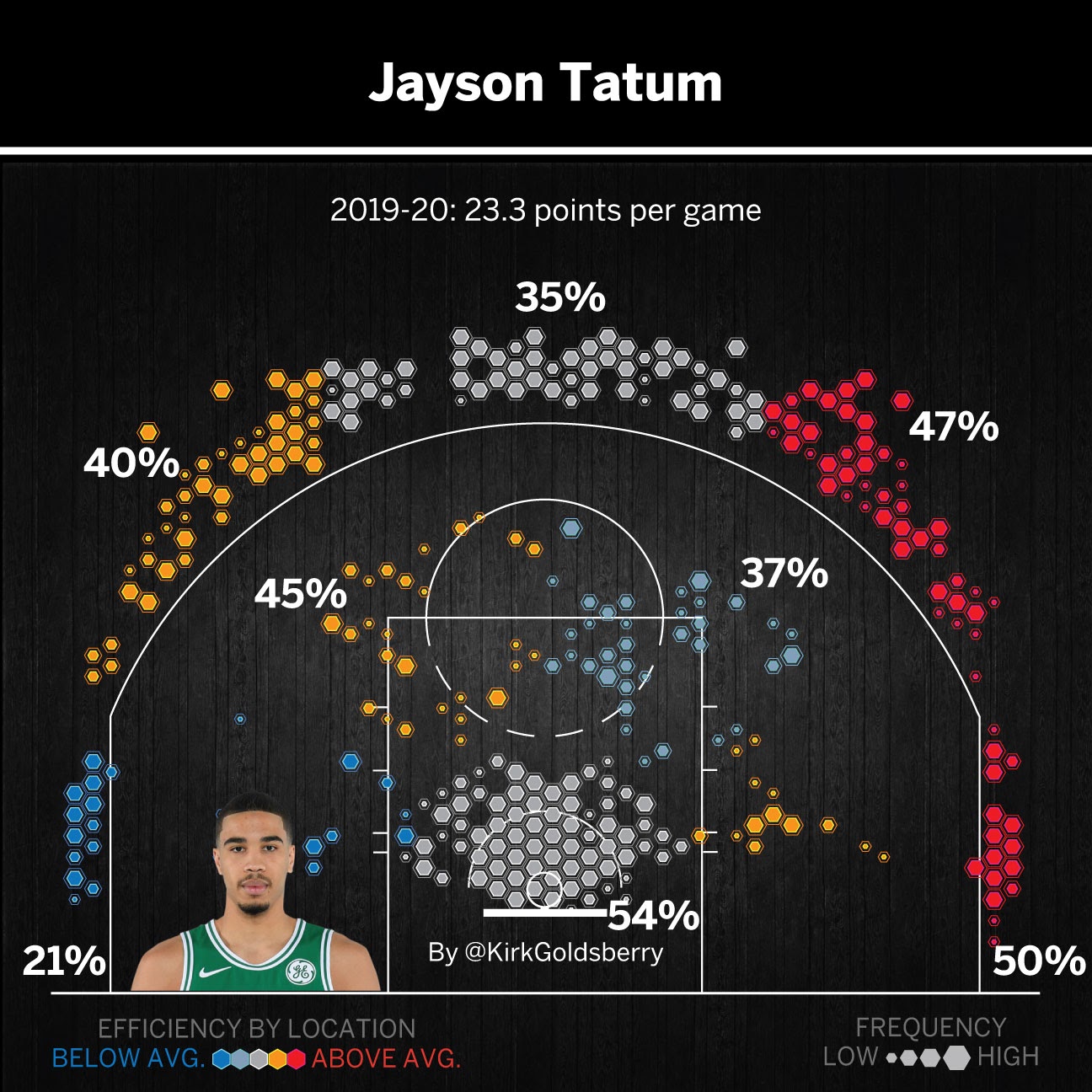 … but the execution isn’t always consistent. In Friday’s restart opener versus the Bucks and their top-ranked defense, Tatum was frozen, sinking just two of his 18 shots and hurting Boston’s ability to steal a win. Then on Sunday vs. Portland, Tatum bounced back with a huge game, scoring 34 points on 22 shots and looking like the best player on the court.

Here’s the thing: Boston’s bubble fate depends on whether or not Tatum can play like he did Sunday against top defenses — you know, teams like Milwaukee and Toronto, which rank No. 1 and No. 2 in defensive rating. Tatum has had an incredible season, but he’s yet to prove he can do this every night. — Kirk Goldsberry

Real or not: The Sixers’ starting lineup shouldn’t include Shake Milton

Not real. Milton was surprisingly good for the 76ers in the six weeks leading up to the March shutdown. That’s what made his performance in Saturday night’s opener against the Pacers so confounding.

Not only was Milton awful — missing his only shot while logging three assists, three turnovers and five fouls in 19 minutes — but he also lost his cool in a heated argument with Joel Embiid after two particularly ugly miscues late in the first quarter.

Still, one bad game shouldn’t be enough to change the plans head coach Brett Brown came into camp with to play Milton in the starting five. His track record so far this season (including shooting 45 percent from 3) earned him more time than this. Plus, Al Horford (minus-26 in 23 minutes) certainly didn’t do anything to reclaim his starting job. Furkan Korkmaz and Matisse Thybulle did nothing to take it for themselves either.

So, at least for now, Milton should stay put. Philly just has to hope that the player it saw earlier in the season comes back starting Monday against San Antonio. — Tim Bontemps

Real or not: Ja Morant will be the best rookie in the bubble

Real. Even with the Grizzlies dropping their first two seeding games in heartbreaking fashion, the Rookie of the Year favorite is going to end up being the most impressive first-year player in this restart.

That isn’t to say a healthy Zion Williamson doesn’t have a higher ceiling long-term, but in terms of which rookie will have the greatest impact while in the bubble, it’s Morant, who is already averaging 23.5 points, 10 assists and 7 rebounds through two games with highlights you only see from the league’s most established stars.

A few things working in Morant’s favor: He has the ball in his hands more than any other rookie. Memphis needs the best version of him to hang onto the No. 8 seed and Morant is built for pressure-packed moments as one of the league’s best fourth-quarter scorers. — Mike Schmitz