A look at what’s happening around the New York Jets:

1. Pre-camp tune-up: Le’Veon Bell means business. After the worst statistical season of his pro career, the veteran running back is so determined to prove it was an aberration that he arrived in New Jersey three weeks ago and started working out with a former elite amateur boxer at a gym near the Jets’ training facility.

Call it the night sweats.

Typically, Bell arrives about 11 p.m. at the Different Breed Sports Academy in Teaneck. He will stay as late as 2 a.m., training with Don Somerville, 50, a decorated boxer who once coached at the U.S. Olympic training center. Bell showed up at 222 pounds, his listed playing weight, and is down to around 210, according to Somerville. His feet “are so much quicker” than before, Somerville said in a phone interview. 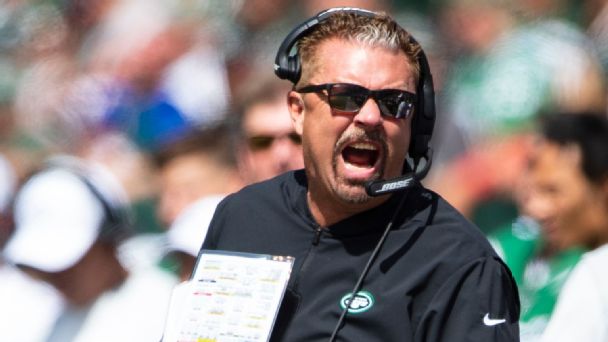 By all accounts, Bell reported in terrific shape last season too, but he never rushed for more than 87 yards in a game and never broke a run longer than 19 yards. Poor blocking was the biggest reason, but Bell acknowledged recently in a radio interview that he wasn’t his usual self during the season. But his old confidence is back; on social media, he recently predicted a career year.

“I told Le’Veon, ‘Three or four years ago, you were the top running back in the league, and now no one mentions your name. That has to be a chip on your shoulder,'” Somerville said.

Somerville believes boxing has done wonders for Bell’s quick-twitch reactions and cardio endurance. His worst quarter, by far, was the fourth, when he averaged 2.4 yards per carry in 2019, perhaps because of fatigue. He seemed to wear down as the season progressed.

At 28, with nearly 1,500 carries on his odometer, Bell recognizes he’s no longer the young kid with a bottomless gas tank. So after his usual offseason training regimen in South Florida, he headed north looking for a pre-training camp routine. He was introduced to Somerville through defensive tackle Quinnen Williams, who has trained with him since June.

And so began their late-night sessions.

“I tell these kids, ‘Champions are created in the dark,'” Somerville said.

In this case, the wee hours.

2. Future nest egg: The Jets are well-positioned to handle a pandemic-induced salary cap crunch in 2021. If the worst-case scenario occurs — the cap drops to $175 million from $198 million — the Jets won’t have to sweat it because they have only $127 million committed to the ’21 cap, according to Over the Cap. That’s the second-lowest total behind the Indianapolis Colts.

They can give themselves additional flexibility by carrying over unused cap space from this year, which is the plan. Right now, they have $30 million, which means they’re rolling in it. The recent moves involving C.J. Mosley, Brian Winters and Quincy Enunwa resulted in a net savings of $10.7 million.

Enunwa’s charge actually went up, from $7.8 million to $11.9 million, but the increase was offset (and then some) by Mosley’s opt-out ($7.5 million savings) and Winters’ release ($7.3 million). The timing of Enunwa’s release was strategic. They could have waited until after the season — he already had been ruled out because of a neck injury — but the plan was to absorb most of the hit in 2020, lowering his 2021 charge to $3.6 million.

On paper, the Jets are situated for a brighter tomorrow. The flip side: The reason they have so much cap room is that they don’t have enough talent on the roster.

3. Big-money busts: Even though the move was procedural and anticlimactic, Enunwa’s release was the final chapter in yet another disastrous signing by previous general manager Mike Maccagnan. Take a look at Maccagnan’s six biggest veteran contracts:

4. Next coach up: Because of the risk involved during the coronavirus pandemic, it’s important to have a contingency plan at every position. But what about the coaching staff? Who takes over if a key member of the staff gets infected?

The issue came up during a virtual meeting in April between players and coaches. Actually, the question came from one of the players, and it prompted Gase to create a “next man up” depth chart if one or more of the Jets’ playcallers get sick — Gase (offense), Gregg Williams (defense) and Brant Boyer (special teams).

“You never know, you might be the next playcaller, whether it’s offense, defense or special teams,” Gase said. “Everybody has to prepare like that.”

He said the trickiest unit was special teams because Boyer has only one assistant and it’s such a … well, specialized area. Gase didn’t specify his emergency special teams coach. Dowell Loggains (offensive coordinator) is the logical candidate on offense, with Frank Bush (inside linebackers) and Joe Vitt (outside linebackers) the most experienced options on defense.

5. The new normal: A small sampling of how the Jets’ players are dealing with training camp in a pandemic, via guard Greg Van Roten:

Receive an early-morning text/questionnaire from the team. (Questions about current health and potential COVID-19 exposure.) Complete the form. Receive a confirmation code. Head to the team facility for drive-through testing. Present the confirmation code. Receive paperwork. Proceed to a technician. Have your nose swabbed. Go inside the facility for a temperature check. Wear a GPS-like gizmo on your wrist for contact-tracing purposes.

“It’s a little different from years past when you roll out of bed and walk into the facility,” Van Roten said.

Not every day of an ACL rehab is good one. That’s why @AWilliamson54 focused on his mindset.

“If you hold onto stuff like that, it’s just going to eat away at you.”

6. Avery’s redemption: The NFL is a wild business. Until recently, Avery Williamson’s roster spot appeared to be in jeopardy. Now that Mosley has opted out for 2020, Williamson is the Jets’ most experienced linebacker and a player they can’t afford to lose. One year removed from major knee surgery, he’s close to returning to practice. Gase, for one, will savor that moment.

Williamson tore his ACL while playing with the backups (the backups!) in a meaningless preseason game last August. Gase took the heat for the ill-advised decision, and he apologized to Williamson.

“If you hold on to stuff like that, it’s going to eat away at you,” Williamson said. “I had my moments where I was in dark places. Didn’t want to talk to anybody and stuff, but it feels like I moved past it.”

7. Rookie hype: Other than quarterback Sam Darnold in 2018, I can’t recall a rookie in recent years generating as much buzz as tackle Mekhi Becton. By buzz, I mean a curiosity factor. Players, coaches and media types can’t wait to see the 6-foot-7, 363-pounder on the practice field. Everyone wants to see if the big man has a big game.

“I call that rookie The Great Wall of Green,” guard Alex Lewis said. “He’s massive … and he looks great. I’m excited to see what he can do on the field when we put the pads on.”

8. The Last Word: “It’s like a dream come true. To get to come to the Jets, walk around the hallways and see the posters of all the guys I watched has been just so incredible so far. Putting on the jersey, it’ weird to see myself in a Jets uniform.” — Van Roten, who grew up on Long Island (near the Jets’ old facility) rooting for the Jets as a kid