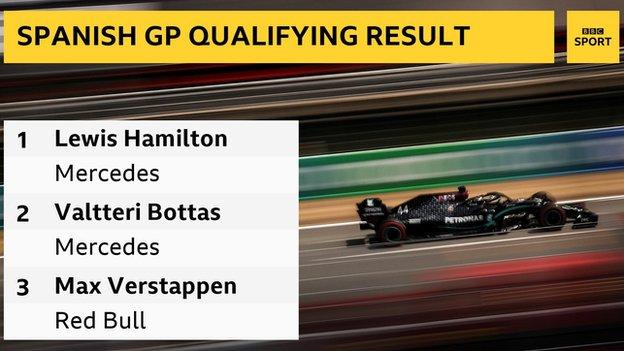 Neither driver improved on their final laps in an anticlimactic end to the session after Hamilton had edged Bottas on their first runs in the top 10 shoot-out.

Red Bull’s Max Verstappen was third, ahead of the Racing Points of Sergio Perez and Lance Stroll.

Ferrari’s Charles Leclerc could manage only ninth, while team-mate Sebastian Vettel was knocked out in the second session and starts two places back in 11th.

A chance for Verstappen

Mercedes were once again in a league of their own over one lap – Verstappen was 0.708 seconds behind in qualifying, although the Dutchman showed good race pace in practice on Friday and the world champions are wary of him.

The two Mercedes drivers have been close on pace all weekend and this carried over into qualifying.

Bottas was actually faster than Hamilton over the first two sectors of their first flying laps, but the world champion had kept his tyres in good shape to put in a strong final sector.

“It’s the first time we’ve been in Barcelona and it’s this hot,” he said. “Physically it’s tough. The tyres are what we’re really struggling with, you see us crawling around the out laps to keep temperature out the tyres but even so they get hot so quickly.

“I couldn’t go quicker on my second lap. I thought I could but it wasn’t a decent lap. The first was decent.”

Bottas described being beaten by Hamilton in qualifying for the fourth time in six races this year as “annoying”.

Verstappen, winner of the last race at Silverstone on Sunday, said: “It’s the maximum we can do at the moment – all weekend we have been P3. I just hope we can be a bit closer in the race.

“I just hope I can apply a bit of pressure, we will do everything we can to be close and make it difficult.”

“This Is For My Mom”: Pacer Obed McCoy On Man Of The Match Award vs India in 2nd T20I
The impact of Messi’s Barcelona exit, one year later
MLS Power Rankings: Rooney debut lifts D.C. off the foot of the table
What happened to college football in the Northeast?
Aspinall to have ACL, MCL, meniscus surgery