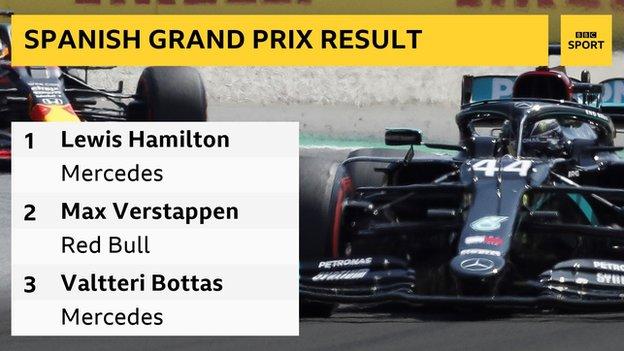 Lewis Hamilton dominated the Spanish Grand Prix to take his fourth victory in six races so far this year.

The Mercedes driver led every lap from pole position and was simply too fast for Red Bull’s Max Verstappen, who was unable to challenge.

Hamilton’s win extended his World Championship lead to 37 points over Verstappen, who is six ahead of Bottas.

It was the 88th victory of Hamilton’s career and he is now just three from Michael Schumacher’s all-time record of wins.

It was also his 156th podium finish, a new record, beating the previous mark, also held by Schumacher.

In temperatures of 30C, the race was gruelling physically for all the drivers, but there was no sign of the expected challenge to Hamilton from Verstappen.

Mercedes F1 boss Toto Wolff had said on the eve of the race that Verstappen was favourite because he had shown stronger pace when the teams were doing their race preparation in practice.

But once converting his pole position into a lead at the first corner, Hamilton was always in command.

He took it easy in the opening laps, to ensure he could make his required pit-stop schedule but after 10 laps started to increase the pace and Verstappen could not keep up.

“I was just in a daze out there,” Hamilton said. “It felt really good. It was a surprise because we had this problem with the tyres [at the last race] and the work we did was what meant we could do this.”

With Hamilton in control, Red Bull’s focus now became ensuring Verstappen held on to second place from Bottas, who made a poor start and dropped to fourth on the first lap, behind Verstappen and Racing Point’s Lance Stroll.

Bottas was past Stroll within five laps but Verstappen was able to hold the Finn just out of range through the first pit stops.

Mercedes decided to run Bottas longer than Verstappen in the second stint, in an attempt to give him a tyre off-set in the final stint.

But although stopping seven laps later than Verstappen and switching on to the soft tyre compared to the Red Bull’s mediums, Bottas was unable to gain any ground.

Bottas’ consolation was the point for fastest lap, but with a 43-point deficit to Hamilton – a gap edging close to two clear wins – the Finn’s title hopes are already effectively almost over.

Hamilton lapped everyone up to fourth place, so far ahead were the front three from the rest.

The Racing Points of Sergio Perez and Lance Stroll crossed the line fourth and fifth, but the Mexican was handed a five-second penalty for ignoring blue flags when Hamilton was lapping him and dropped behind the Canadian in the results.

McLaren’s Carlos Sainz drove a strong race on his home track to take sixth, ahead of the impressive Sebastian Vettel, who made a one-stop strategy work to move up from 12th on the grid to finish seventh.

Vettel’s team-mate Charles Leclerc was running ahead of him and was also aiming for a one-stop but spun when an electrical fault cut his engine on lap 36.

He managed to get the car going again at the second attempt, and did a lap without his seat belts secured to get back to the pits, where he had to retire.

A much-needed weekend off after six races in seven weeks before another run of three in a row, starting with the Belgian Grand Prix at classic Spa-Francorchamps.

Lewis Hamilton: “I was in a daze out there,” he says. “It felt really good. It was a fantastic effort from the team. It was a surprise because we had that problem with the tyres last weekend, but we seem to have understood it.”

Max Verstappen: “It was good to split the two Mercedes. I didn’t have the pace like Lewis but I’m happy with second. The start was crucial to get ahead of Valtteri, then I was just trying to go at my own pace.”

Valtteri Bottas: “The start was the key point, I lost a position and then had to push hard to make ground and suffered the tyre condition. In stint two I was behind Max and everyone knows how hard that it. Off the start, Lewis got away and I did not have a tow like those behind.”

The areas All Blacks must fix to stop their slide and upset the Springboks
Velasquez pleads not guilty to attempted murder
Ex-featherweight champion Famechon dies at 77
‘Pitbull’ Freire to defend Bellator title vs. Borics
Liverpool rescue a point at Fulham, but could be left playing catch-up