It took more than 13 years, but Frankie Edgar has finally lost his battle with the people who want him to cut weight.

My opinion: No one has fought the good fight against weight cutting as much (or as well) as Edgar. In a sport in which the majority of athletes cut at least 8% of their body weight right before competition, Edgar has had a Hall of Fame-worthy career without doing it once.

A loaded UFC bantamweight division will get even deeper this weekend. In the UFC Fight Night main event on Saturday, Frankie Edgar will make his debut at 135 pounds against Pedro Munhoz. Edgar is a former UFC lightweight champion, and Munhoz has won three of his past four fights.

Even when Edgar was a champion at 155 pounds, UFC president Dana White couldn’t help but talk about what “a beast” Edgar would be at 145. And when he did move down after losing the title to Benson Henderson and failing to regain the belt in a rematch — in a pair of controversial decisions — Edgar’s own coach still said he’d look great at 135.

Well, the time has come to finally see it. Edgar, 38, will make his bantamweight debut in the main event of UFC Fight Night on Saturday in Las Vegas, against top-10 opponent Pedro Munhoz. And if Edgar stays in this weight class, it will be the first time he consistently fights opponents his size.

The question of “How will Edgar look at bantamweight?” isn’t the only uncertainty going into this weekend, though. Unfortunately for him, it has become attached to “How much does Edgar have left?” Everyone I talked to about this fight — other fighters, coaches, etc. — said they were curious to see how Edgar’s style fares at a lower weight, but also added something to the effect of “He’s looked vulnerable in his last few fights.”

Edgar did not suffer a single knockout loss in his first 28 pro fights. Now it has happened twice in his past four, both times in the first round. Few fighters are as beloved by their peers as Edgar, so it all comes from respect, but questions about his durability are widespread going into this fight.

And in a way, maybe that’s poetic. Edgar has been routinely counted out, or at least perceived to be vulnerable, because of his size throughout his career. Now we can’t say he’s fighting out of his weight class, so we say he waited too long to move down.

People have waited a long time for Edgar at 135 pounds. And now that he’s here, it almost feels like we’re not expecting much to come out of it. For a guy who won the lightweight championship against BJ Penn as a 5-to-1 underdog, maybe that’s how he likes it.

11: UFC fighters who have won in three weight classes in the modern era. Edgar, a former lightweight champion who in recent years has competed at featherweight and now is making his debut at bantamweight, is seeking to become the 12th. The others: Ildemar Alcantara, Jared Cannonier, Kenny Florian, Manvel Gamburyan, Erik Koch, Lucas Martins, Conor McGregor, Anthony Pettis, George Roop, Diego Sanchez and Paul Taylor.

441: Days since Munhoz’s last fight, a decision loss to Aljamain Sterling. It is the longest layoff in the UFC career of Munhoz, who previously sat out 399 and 243 days between bouts.

7:15:51: Total UFC fight time for Edgar, in hours, minutes and seconds. It is the most in UFC history, far ahead of second-place Rafael Dos Anjos‘ 6:43:11. In his 26 appearances for the promotion, Edgar has fought a record 89 rounds.

13: Finishes by Munhoz among his 18 career wins (eight submissions, five knockouts). His six bantamweight finishes are the fourth most in division history.

9: UFC championship fights for Edgar, including one for an interim belt.

Last month, Pedro Munhoz thought he had lost out on one of the biggest opportunities of his career. On July 6, just hours before he was set to fly to Abu Dhabi, United Arab Emirates, for UFC 251, Munhoz was told that he had tested positive for COVID-19. His bout with legend Frankie Edgar was off.

“It was kind of like a shock,” Munhoz told ESPN. “But at the same time, it’s not. Because literally everybody is free and open to get that s—. The thing that I got worried [about] was not fighting Frankie. That was a fight I was looking forward to — sharing the Octagon with him.”

Luckily for Munhoz, the fight was rebooked for this weekend.

Conan Silveira, Munhoz’s coach at American Top Team, said Edgar is the “biggest fight” for Munhoz right now. Edgar is a former UFC lightweight champion and longtime featherweight making his debut at bantamweight. Munhoz is ranked No. 7 by ESPN in that division, and a win over a big name like Edgar would get Munhoz back on track after a loss in his last fight to Aljamain Sterling over a year ago.

Munhoz has lauded Edgar as a legend, someone whom he has watched compete since even before Edgar won the UFC lightweight title in 2011. But Munhoz’s coach doesn’t believe that deep respect will get in the way of his fighter performing at his best.

Munhoz has two vicious knockout finishes in his past three wins. His single-minded focus now is on a move toward title contention. 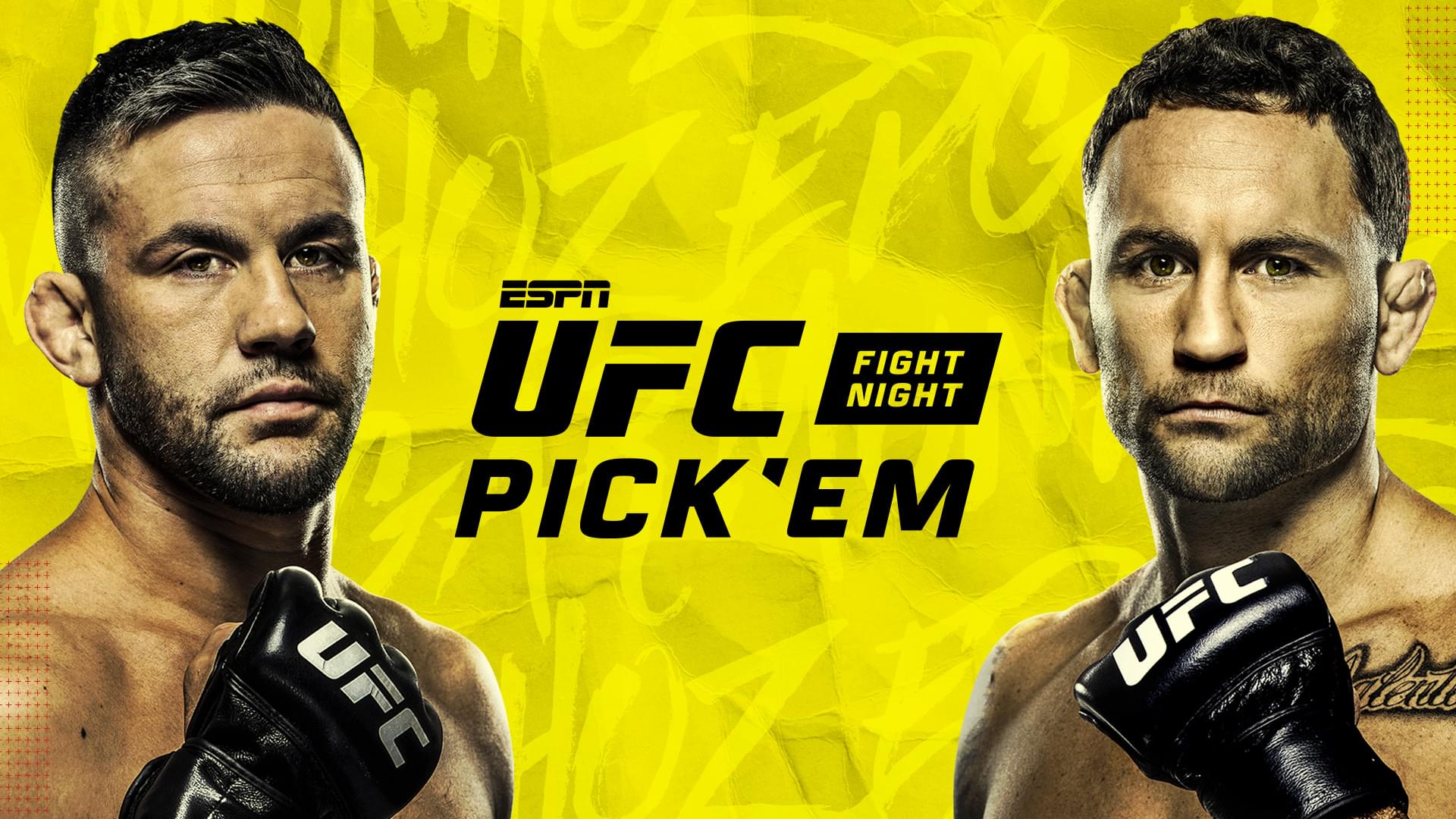 Answer questions from UFC Fight Night on Aug. 22 LIVE on ESPN and ESPN+. Compete for your chance to win UFC 253 for FREE! Make Your Picks

The biggest curiosity I have about Edgar at 135 is how effective his wrestling will be. There were times at 145, and especially at 155, when I thought his wrestling could have made a difference in a fight but the size of his opponent was just too great. Edgar’s size deficit had an impact. In those tight moments in which Edgar really needs a takedown, will it be different at this weight? I’m going to take a leap of faith and say yes, and predict Edgar still has more than what we’re giving him at the moment. Edgar via decision.

Ovince Saint Preux is closing in on light heavyweight history.

His co-main event against Alonzo Menifield will be OSP’s 22nd UFC fight and 21st at light heavyweight. The latter of those numbers will be the second most in division history behind only the 22 of Jon Jones. And with Jones vacating his championship this week and saying that if he can come to agreement with the UFC he will move up to heavyweight, that should leave the 205-pound longevity distinction within reach of Saint Preux.

Saint Preux also has 10 finishes at 205 pounds, second only to Glover Teixeira, who has 11. Menifield has not been finished in his 10 pro fights.

1. Mariya Agapova made a strong impression in her UFC debut in June, submitting Hannah Cifers in less than three minutes. That made her the first fighter representing Kazakhstan to win in the UFC. Agapova enters her strawweight bout with Shana Dobson on a three-fight winning streak, all by stoppage.

2. Daniel Rodriguez, who faces Takashi Sato at welterweight, is looking to extend his winning streaks to three fights in the UFC and eight overall. Rodriguez is unbeaten since February 2018.

4. Dana White’s Contender Series contract winner Joe Solecki makes his second UFC appearance, taking on lightweight Austin Hubbard, who is coming off a victory over Max Rohskopf. Solecki has won four consecutive fights and last year was part of the first instance of White giving out contracts to every winner on that week’s show, which the UFC president repeated last week.

Rodgers open to reworking deal if he plays in ’23
Hall of Fame voting winners and losers: Scott Rolen is headed to Cooperstown — who else got good (or bad) news?
What’s next for USMNT without sporting director, GM or coach?
‘A little adversity’: Bruins lose 2 in row for 1st time
Sources: Dolphins not expected to pursue Brady