This will be the most unpredictable trade deadline we’ve ever seen. My colleague Brad Doolittle just did a great job outlining the issues teams face this deadline, along with a position-by-position look at who might be available and which teams have holes to fill.

One big factor aside from the cash-flow problems that exist in 2020 and the expanded playoffs keeping more teams in the race is that only players from each team’s 60-man player pool can be traded, so those Class A pitchers who often are exchanged for established relief pitchers won’t be eligible.

With that in mind, here are five major questions that will shape what might happen on Aug. 31:

Do the Red Sox blow things up … and even consider trading Xander Bogaerts?

Chaim Bloom and the rest of the Boston front office have some serious self-assessment to do over the next 10 days. Given the absolutely gruesome start to the Red Sox’s season, how far away from contending is this team? As bad as things are, you have to be cautious:

3. They’ll get Chris Sale back sometime next season; hopefully Eduardo Rodriguez will be cleared to pitch; they could sign a couple of free agents and be competitive in 2021.

On the other hand, the whole idea behind trading Mookie Betts was not just to trim payroll but also to start building a deeper roster and farm system, similar to how the Rays and Dodgers operate, but supplementing that with the financial power of the Dodgers. So Bloom could try to flip pending free agents Jackie Bradley Jr., Kevin Pillar and Brandon Workman, along with the likes of J.D. Martinez, Matt Barnes, Heath Hembree and Mitch Moreland.

The most interesting scenario, however, involves Bogaerts. He’s signed to a long-term deal through 2025 with a 2026 option, but as The Athletic’s Ken Rosenthal pointed out, Bogaerts has a couple of interesting clauses in his contract. First, he receives full no-trade protection once he reaches seven years of service time, which will happen on Sept. 6. He also can opt out after 2022, and since his deal is considered under market value, at least based on his 2019 season, that’s a distinct possibility (unlike Martinez, who has an opt-out after this season, but has struggled early on).

So if the Red Sox are rebuilding for a few years down the road, maybe they try to cash in on Bogaerts. The odds are slim, and even if that is the thinking, such a trade is more likely to happen in the offseason, when every team’s prospect pool opens up. Also worth noting is that all the top teams are set at shortstop, although maybe a team like the Braves could flip some of its young pitching and an outfielder like Drew Waters for Bogaerts to play third base. Bottom line: If we do have an active trade deadline, it’s probably because Bloom is busy wheeling and dealing.

What will the Braves do?

Of the current division leaders, the Braves are the team with the biggest holes to fill. With Mike Soroka out for the season and Cole Hamels still injured, the rotation other than Max Fried has struggled. Youngsters Kyle Wright and Touki Toussaint have had issues throwing strikes, Sean Newcomb was punted back to the training site, and now they’ve moved veteran Josh Tomlin into the rotation. They’ve also struggled at third base, where power-hitting Austin Riley is hitting .167 and continues to have contact issues, and utility man Johan Camargo is hitting .192 with his own strikeout issues. Center fielder Ender Inciarte also has struggled at the plate and Nick Markakis is in quarantine. (Top prospect Cristian Pache was just called up, and he might displace Inciarte in center field.) 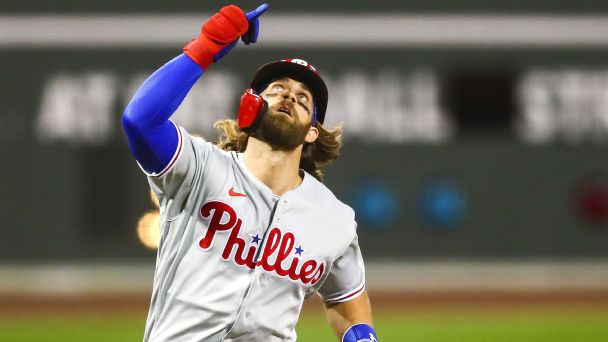 Anyway, the Braves have holes and young players to trade. Of course, it’s not really the Braves’ way to add payroll or trade young players, and they probably can win the NL East with the current roster. Additionally, the list of potential starting pitchers available is … not great. Mike Minor? He’s off to bad start. Johnny Cueto? He makes $21.8 million next season. Jeff Samardzija or Kevin Gausman? Trevor Bauer would be a nice get, but with the expanded playoffs, the Reds are unlikely to fold up.

So maybe the Braves have to think about outslugging their opponents. Kyle Seager is hitting .301/.391/.548 for the Mariners, plays a solid third base and would give the Braves another left-handed bat to help balance the lineup. The hitch is he will make $18.5 million next year, not onerous, but this is the Braves. The Mariners could sweeten the offer with Taijuan Walker or throw in some cash.

Will the Dodgers make a big move?

In recent seasons, the Dodgers have been active around the trade deadline. In 2016, they acquired Rich Hill and Josh Reddick from the A’s (and traded a little-known prospect named Yordan Alvarez for reliever Josh Fields). In 2017, it was Yu Darvish, plus a couple of relievers. In 2018, it was Manny Machado to fill in for the injured Corey Seager, plus Brian Dozier and David Freese. Last year, they were a little more quiet, adding a couple of spare parts in Jedd Gyorko and Adam Kolarek, but mostly relying on rookie call-ups Will Smith and Gavin Lux as the major additions. Maybe things would have turned out differently if Dave Roberts had used Kolarek to face Juan Soto in Game 5 of the division series instead of Clayton Kershaw — Kolarek had faced Soto three times in the series and gotten him all three times, including two strikeouts.

The Dodgers are loaded once again. The rotation has depth with Kershaw, Walker Buehler, Julio Urias, Dustin May and Tony Gonsolin, who hasn’t allowed a run in three starts. The bullpen looks much deeper and better than it was last year, when Roberts’ ultimate lack of faith in his relievers led him to use Kershaw in relief against the Nationals. They have Kolarek, Jake McGee and Caleb Ferguson from the left side, with Kenley Jansen, Blake Treinen, Dylan Floro, Pedro Baez and Brusdar Graterol from the right side. Really, the biggest problem so far is Cody Bellinger, Max Muncy and Joc Pederson — the three big lefty power bats — are all hitting under .200. You’re going to ride those three, although Dodgers fans will be quick to point out Bellinger is a career .178/.234/.326 hitter in the postseason.

Speaking of Dodgers fans, are they completely confident in Jansen, who has a 0.87 ERA and is 7-for-7 in save opportunities? No, and they won’t be, not until he gets that final out in the clinching game of a World Series. If Mariano Rivera wants to come out of retirement, maybe you give him the job, but I don’t see the Dodgers trading for Workman, Trevor Rosenthal or Ken Giles and trusting them with closer duties. This is your team, Dodgers fans, and it still looks like the best team in baseball. No additions necessary.

Will the Yankees make a big move?

The Rays just swept the Yankees in a three-game series to climb into first place in the AL East, even with Charlie Morton on the IL, Tyler Glasnow not pitching that well (6.00 ERA) and Blake Snell averaging fewer than four innings a start. The Yankees weren’t at full strength in the series — Aaron Judge, DJ LeMahieu and Giancarlo Stanton are all injured — but the results do suggest this isn’t going to be an easy ride for the Yankees.

ESPN’s Buster Olney leads the discussion of the latest news and notes around baseball with the game’s top analysts. Listen

Assuming the offense sorts itself out — the Yankees are tied for fourth in the majors at 5.40 runs per game — the questions concern the pitching staff. James Paxton started Thursday, and while he allowed just one hit with eight strikeouts over five innings, he also allowed four walks and three runs, and his season ERA stands at 6.64. After he underwent back surgery in February to fix a herniated disk and have a cyst removed, his velocity remains way down from 2019, with his fastball averaging 92.3 mph compared to 95.4. He averaged just 91.4 against the Rays, and Aaron Boone announced after the game that Paxton will have an MRI after feeling discomfort in his forearm/elbow area. Does that sound like a pitcher who is going to start the third game of a playoff series?

The problem, as with the Braves: How are you going to upgrade the rotation? The more likely scenario is the Yankees look to add bullpen depth and ride the relievers in the games not started by Gerrit Cole or Masahiro Tanaka. Besides the relievers mentioned above, other trade candidates could include Mychal Givens, Tony Watson, Chris Stratton, Richard Rodriguez and Ian Kennedy.

What if the Astros decide to … sell?

OK, play along here. Granted, this idea was a little more plausible before the Astros’ current eight-game winning streak, but consider:

• Yordan Alvarez is out for the season after knee surgery.

• Closer Roberto Osuna is out for the season after Tommy John surgery.

• We don’t have a timetable yet on Justin Verlander‘s return. (He did play catch Monday.)

What if the Astros decide this just isn’t going to be their year, factor in those players who may be leaving, factor in the stink hanging over the organization (which makes it more likely those players leave) and decide to make some moves? It’s unlikely, and certainly if Verlander is healthy come October, a rotation with Verlander, Greinke, McCullers and Jose Urquidy (who has been cleared to pitch, but is still at the team’s alternative training site) is good enough to run the table.