The letter (well, “burofax”) arrives, recorded delivery. That way, no one can pretend that they didn’t get it. Someone opens it — Barcelona president, Josep Maria Bartomeu, himself? — and reads it. What does it say? Wait, what? It says that Lionel Messi, the greatest player in the club’s history, in any club’s history, wants to leave. Now. And for free. And he thinks that legally — there’s a reason he’s used a “burofax,” after all — Barcelona have to let him.

Let’s try and answer a few basic questions around the seismic news from Tuesday in the football world.

Messi informed Barcelona by “Burofax.” By what?

Well, quite. And suddenly it’s all the rage. A “burofax” is essentially a formal letter sent by recorded delivery, that is officially signed off by the person who receives it. It is a way of the sender being able to prove legally that they have served notice of the content of the letter. And that makes it part of a legal framework, admissible as part of a court case — should it get that far.

In other words, Barcelona cannot say “what? You want to go? We had no idea. Why didn’t you tell us?”

In short: that’s them told. Officially.

But does it necessarily mean that he is leaving for sure? No, not really, although it’s hard to imagine any other outcome. There’s no way back, in the sense that nothing can ever be the same again. Even if the stays, it won’t feel the way it did. Even if everything changes but him — if the president goes, if Luis Suarez stays, if Neymar comes, if all those wildest dreams come true, if he suddenly thinks, “Hey, this is more like it!” — it’s not ever going to be the way it was. Something broke. It already had, of course — which is why it came to this — but there is a point at which fixing doesn’t really feel possible any more.

– Hunter: Messi wants to go, and Barca should let him
– Robson: Messi to Man City would fit ‘perfectly’ | Social reax
– From Brady to Messi: A year of big sporting breakups

And, so what do you do? You let go. What are you holding on for, anyway? If he really is determined to depart, there might well be no point in forcing him to stay.

And yet, that could happen. Barcelona could fight this: The only damage worse than the damage already done might be for Messi to actually, you know, go. Seen from the other side, what you want and what you get are not always the same thing — even if you’re Messi.

ESPN FC’s Craig Burley explains why Messi is fed up with Barcelona.

What might the reason be? Is this designed to force Bartomeu out?

That’s an attractive idea, and it probably would change some things for the club’s No. 10. The hatred — and that really must be the word given what we have seen — is strong. There might be those on the club’s board who want Bartomeu to walk, seeing it as the only way to rescue this situation. He’s going in seven months anyway, after all. But that fact suggests that it’s not about that.

Bartomeu going might have stopped it getting to this point, but having got here, it feels as if it’s beyond that now.

Messi knew Bartomeu would be gone soon; all he had to do is wait. But he doesn’t have time to wait. He is 33, and he wants to win now. He has, what, two seasons left? Two shots at the Champions League that his prime years have not delivered. And one shot at a World Cup, which he must prepare for, not just show up. If he’s going to do it, it has to be now. He doesn’t have the time or the patience. He has had enough.

What might the reason be? He’s pissed off. Like, really, really pissed off. The desire to go is deep. Bartomeu got him to this point, but even Bartomeu going might not be enough to pull him back from the edge. And think what that means: leaving the club where he has played his whole career, the club where he said he wanted to retire. The club he joined at 13. His home, where his family is, where his children have grown up, where he intends to live the rest of his life and theirs. And yet he still does this.

That’s how bad it has become. That’s how angry he is, how convinced he is that there’s no solution.

Well, quite. Which is why Barcelona won’t actually let him leave, will they?

There are politics to be played out there, you suspect. If Messi leaves, Bartomeu will forever be the president who let him go. Worse, the president that pushed Messi out. But it might be too late to try to prevent that, except by going himself and no longer being the president at all. And even that opportunity might have passed him by now. Besides, even if Messi doesn’t go, Bartomeu will always be seen as the man who did this.

And yet Barcelona just can’t let it happen. They must make it his fault; they must find a way to justify it. They must fight it, and be seen to fight it. All the more so because if they don’t, they will look doubly bad to have allowed him to manoeuvre them into a position where, just like with Neymar, they can’t prevent it.

They have been played, again. They look bloody stupid. Even if they are resigned to him going, they will say they are not: they will argue that the clause does not apply, if only for reasons of image and economy. They will point to the buyout clause (they would love €700m). They will get lawyers onto it. They will try to show that Messi’s chance to leave this year for free expired on May 31.

And who is right about that? Is that contract clause valid?

Messi’s lawyers will claim that the true date is the end of the season, which, exceptionally, this season was the end of August rather than May. But it will depend on the precise wording of that contract. If, that is, this is to be a legal battle. It’s not that simple though, and if you get to a legal fight — a real one — you’ve already lost.

You can’t let him go, but how can you not let him go when it reaches that point?

So, as we were saying: They can’t let him go, can they? 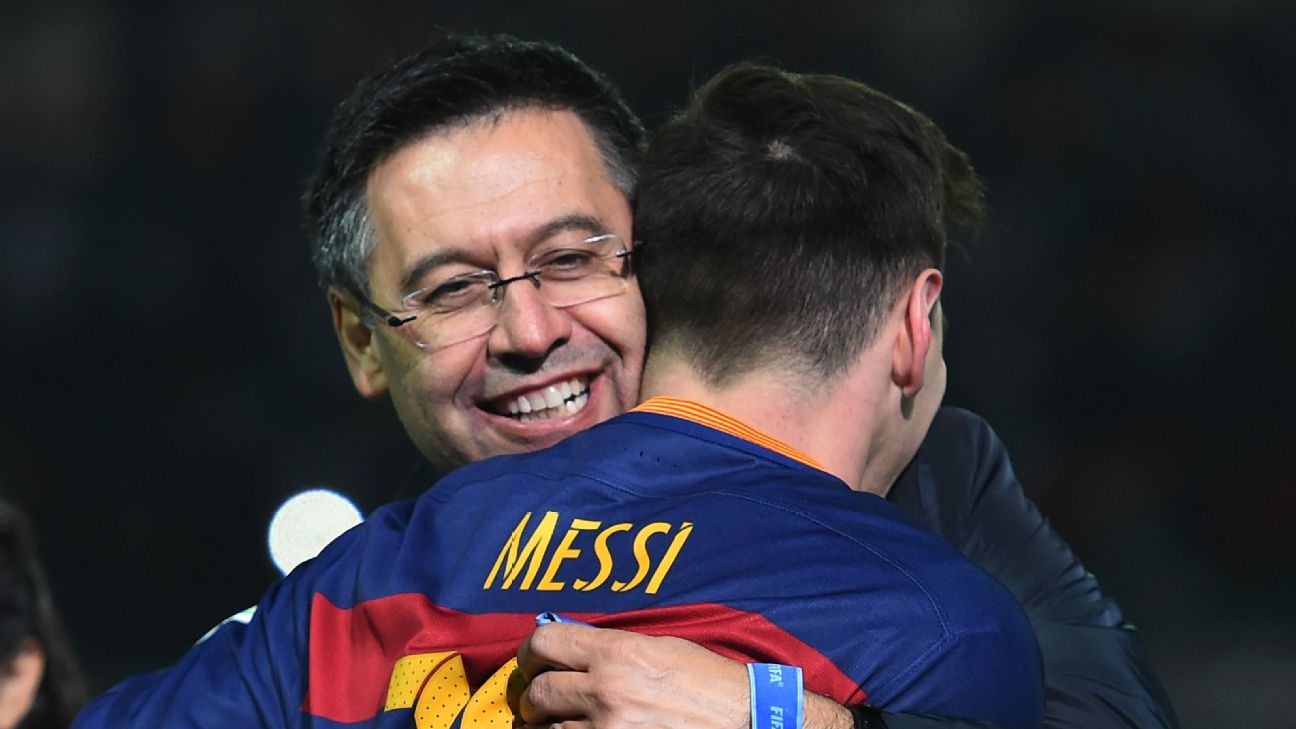 Well, what are you going to do? Force him to stay and play, with an unhappy face on, and all that destructive power, until next year when he’ll walk for free? And when everything will be worse. Even if he stayed, never left and won it all, this damages everyone forever.

So, you try to change his mind instead? Maybe. But that’s not going to be easy and many on the board do not have their heart in it. They have already lost.

And don’t believe that this is a momentary flash of anger from Messi, either. This has been building for a very, very long time. And you don’t serve formal notice just because you’re a bit pissed off. Messi is very, very, very pissed off. But he has also thought about this. A lot.

Sid Lowe dives into the leading candidates to land Lionel Messi after the Barca star reportedly expressed his desire to leave.

If he does go, where can he go?

But that doesn’t resolve anything, and that won’t happen. It’s not good for anyone. If he stays, it must be because he has been convinced to stay, not because he has been locked from departing, trapped in a relationship he doesn’t want anymore. If he can go for a fee, but one that recognises that he wants out and only has a year left on his contract, then there are a handful of clubs.

Messi wants to win. He needs to trust that it can happen at his next destination. Potential clubs need money, and the desire. Believe it or not, but some clubs wouldn’t what him. Manchester United would. Inter Milan too. Maybe Paris Saint-Germain can get the MSN of Messi, Suarez and Neymar back: That would be fun.

It’s too soon for the U.S., or Qatar, or some other semi-retirement like that. There have already been conversations with Manchester City. That’s the deal the makes the most sense. It’s like some heist film. Pep Guardiola and Messi, the old gang, the best in the business, back together for one last job.

Sid Lowe reacts to reports that Lionel Messi has made his desire to leave Barcelona official.

What would Barcelona be without him?

They would never be the same again. Or put another way: It doesn’t even matter what they would be without him. Not right now. No man is bigger than the club, yada yada. Nonsense, not least because this isn’t about a club being bigger than a player, or any player. It is because this is the club; these are the moments that clubs are made of. And this moment, this legacy, will not be fixed nor forgotten. Ever. Ever.

This is their history now, and it will hurt. Always.

It is worth noting that Messi’s legacy is likely to be hurt too, and he must know that — and yet he still wants to go. Even if this works perfectly for Barcelona, it damages them. Imagine they let him go, they get a good fee for him, they sort out their dire financial crisis, they build a team, they win things.

Imagine, then, that he doesn’t. He’s actually a bit rubbish wherever it goes. It doesn’t matter. Their greatest ever player still went when he didn’t need to. Or shouldn’t have needed to. He reached a point no one should have ever let him reach, and he did so like this. Because you let it happen; in fact, because you made it happen.

This isn’t just a player leaving. It’s not even just Messi leaving. He’s 33. It was going to happen soon. Rather, it’s him leaving like this. It is everything that says about you.

India Creates Guinness World Record For Highest Attendance In A T20 Match
Auburn hires Freeze, ‘the best fit,’ as next coach
Key Areas To Focus For India In the Lead Up To The 2023 World Cup
Neymar has Pele’s Brazil record in sight; Portugal fend off Ronaldo drama
“I Wasn’t Hurt”: Shikhar Dhawan On Being Removed As Captain For Zimbabwe Series At Last Minute