Anthony Smith is one of the toughest fighters in the UFC, all right? Everyone knows it and, frankly, loves him for it.

This is the guy who could have called it quits in a UFC title fight against Jon Jones last year — after Jones blasted him with an illegal knee in the fourth round. If Smith had stayed on the canvas, he probably would have won the light heavyweight belt via Jones’ disqualification. That, in turn, probably would have set up an immediate rematch against Jones. And that would have equaled money.

Former light heavyweight title challenger Anthony Smith will take on Aleksandar Rakic in the UFC Fight Night main event on Saturday. Smith is coming off a loss to Glover Teixeira in May; Rakic had won 12 straight fights before losing to Volkan Oezdemir in December. In the co-main event, former UFC welterweight champ Robbie Lawler will face Neil Magny.

But Smith didn’t quit in that fight. Nor did he quit in his last one, in May, when Glover Teixeira beat him to the point of his teeth falling out. Smith lost multiple teeth that night, suffered a broken orbital and a broken nose. And that was less than four months ago.

There are a lot of ways to look at Saturday’s UFC Fight Night main event between Smith (33-15, 8-4 in the UFC) and Aleksandar Rakic (12-2, 4-1 UFC), which will take place at the UFC’s Apex facility in Las Vegas. Rakic is certainly interesting. He’s 28 and looks like a potential title challenger in the future.

But the one story that is impossible to ignore in this is Smith, and whether or not the man is truly too tough for his own good. Smith has shrugged off the physical toll of his previous fight. He surprised many when he revealed he has told his corner to never throw in the towel, regardless of how much danger he’s in.

Smith is intelligent, articulate and very capable of explaining why he’s always prepared to go out on his shield. It’s a pact he has made with himself and the people who support him, and he’s never going to change it. And not only that, he doesn’t see what all the fuss is about. This is just how he chooses to compete.

But as Smith, a veteran of nearly 50 professional fights, prepares to go into a main event against a very legit up-and-comer, less than four months removed from a loss that turned heads simply because of the sheer brutality of it, one can’t help but hope for Smith’s well-being as much as a mark in the win column.

31: Finishes for Smith among his 33 career wins (19 knockouts, 12 submissions). Since moving up to light heavyweight in 2018, Smith has had four finishes, tying him with Paul Craig for most in the division during that time.

12: Winning streak for Rakic before dropping a split decision against Volkan Oezdemir in December.

6: Consecutive fights for Smith that have been UFC main events. That ties him with Chan Sung Jung for most among fighters to never win a UFC championship.

2.76: Strikes landed for every one absorbed by Rakic, the best differential among active UFC light heavyweights. Rakic also lands the second-most significant strikes per minute (5.19) of any active 205-pounder. The leader there is Ion Cutelaba (5.29), who fights on the undercard.

108: Days it will have been, on fight night, since Smith suffered a broken orbital bone, broke his nose and lost two teeth in a fifth-round TKO loss to Glover Teixeira in May. 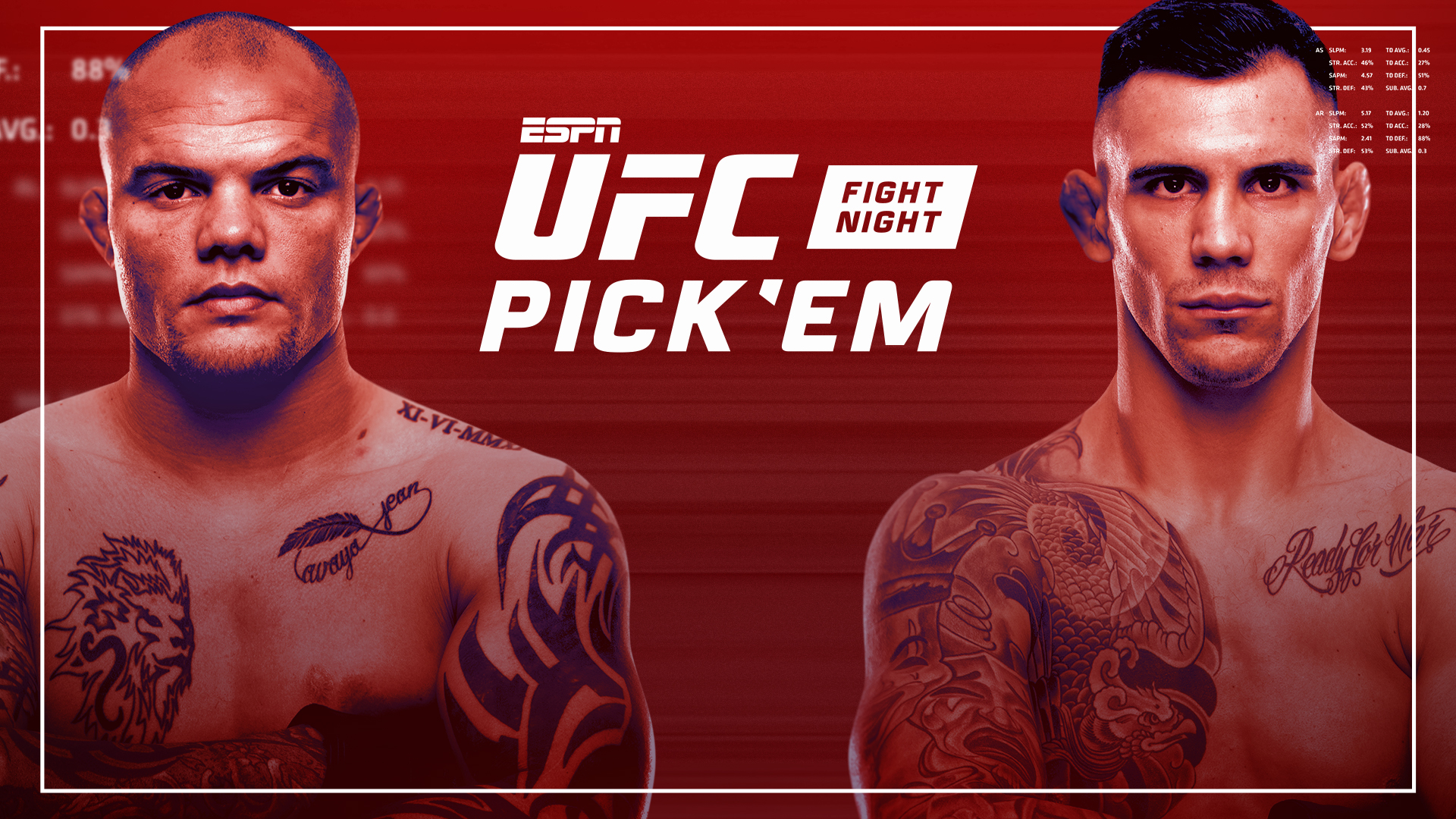 Play for a chance to win UFC 253 for FREE! Answer questions from UFC Fight Night on Aug. 29 LIVE on ESPN+. Make Your Picks

Rakic is close to a 3-1 betting favorite, which I think is a little steep considering Smith’s experience, well-roundedness and overall talent. Rakic is definitely good, and I’m excited about his future, but to be a 3-1 favorite in his first main event against a former title challenger? It seems as if the line is getting ahead of itself. Nevertheless, I think he gets it done, primarily on the feet. Rakic by decision.

Watch the main card on ESPN+. If you don’t have ESPN+, get it here.

Lawler is still ‘Ruthless’ after all these years

Robbie Lawler made his UFC debut as a 20-year-old in 2002. How different was that time in MMA? Lawler’s first event was UFC 37 in Bossier City, Louisiana, headlined by a middleweight championship bout between Murilo Bustamante and Matt Lindland. Both of those guys have been retired for nearly a decade.

The man known as “Ruthless Robbie,” on the other hand, is still going at age 38. After seven UFC fights, he left for other promotions, becoming a champion in EliteXC and competing for a belt in Strikeforce. Lawler returned to the UFC in 2013 and the next year won the welterweight title. Shiny belt aside, Lawler co-authored fight of the year candidates in three straight years (2014 vs. Johny Hendricks, 2015 vs. Rory MacDonald, and 2016 vs. Carlos Condit).

Lawler now is on a three-fight losing streak, though, and he needs to show something in his co-main event against Neil Magny, who is no newcomer. Whereas Lawler has competed 21 times inside the Octagon, Magny is a 22-fight UFC veteran with 16 wins at welterweight. Lawler has won 13 times at 170 pounds.

1. Magomed Ankalaev and Ion Cutelaba finally meet in a rematch of their controversial fight in February, which Ankalaev won by a first-round stoppage that Cutelaba and many observers disputed. Both fighters rank in the top five among active light heavyweights in significant strike differential, according to UFC Stats. Ankalaev is ranked second (plus-2.22) and Cutelaba fifth (plus-2.03). Cutelaba also lands the most significant strikes per minute among active light heavyweights. Ankalaev has won his past four fights at light heavyweight, tying him with Ryan Spann and Glover Teixeira for the longest active win streak in the division.

2. After alternating wins and losses in her first six UFC fights at strawweight, Alexa Grasso makes her flyweight debut against Ji Yeon Kim, who has won three of her four fights since moving to 125 pounds in 2018.

3. Ricardo Lamas fights the late replacement Bill Algeo, who stepped in for Ryan Hall on Monday and will be making his UFC debut. Lamas has 10 UFC wins at featherweight, tying him for fourth most in division history behind Max Holloway (16), Darren Elkins (13) and Cub Swanson (11).

4. Also making his UFC debut is 7-0 Impa Kasanganay, who earned a contract on Dana White’s Contender Series on Aug. 11. The 18-day turnaround is the quickest for a DWCS contract winner in the history of the show.

5. The other undefeated fighter on the card is 12-0 Sean Brady, who meets Christian Aguilera in the first bout of the evening. According to Caesars Sportsbook, Brady is the largest betting favorite on the card at -380, as of Thursday. There are five fighters on the card who are 3-1 favorites or better: Brady at -380, Ankalaev at -330, Rakic and Grasso at -320 and Mallory Martin at -310.