Through six volcanic NBA playoff games against the Utah Jazz, Jamal Murray has:

Murray has almost single-handedly pulled Denver even. He might have to play all of Game 7 (8:30 p.m. ET, ABC). Denver is plus-21 in 225 minutes with Murray on the floor, and minus-47 (!) in the 68 minutes he has rested. Those are Joel Embiid-against-the-Toronto-Raptors-level splits. (Sorry, Philly fans.) The LA Clippers, Los Angeles Lakers and Milwaukee Bucks might be able to play 4-on-5 for 68 minutes and not lose that badly — at least against bottom-feeders. (Am I serious? I don’t even know. I’d love to watch that, though.)

It is hard to overstate how badly Utah embarrassed Denver through four games. The Nuggets at that point were allowing 131 points per 100 possessions — 16 points worse than the league’s leakiest regular-season defense. Michael Malone, Denver’s coach, was playing schematic and matchup whack-a-mole. Nothing worked.

Skeptics within the league wondered if some team down big in the first round — without home-court advantage to buoy them — might pack it in. The Nuggets were never going to do that. This core proved its grit before it even made the postseason. Barely alive in the race for the No. 8 seed two seasons ago, the Nuggets needed to be perfect over the final two-plus weeks to set up a winner-take-all showdown against the Minnesota Timberwolves.

They did it, snatching a bundle of close games and taking a superior Minnesota team to the wire on the road.

Murray imbues the Nuggets with a relentless confidence. He just keeps coming. His chest is always puffed out. He was taking superstar shots before he even sniffed stardom, as if he were entitled to them. You might have chuckled when he missed: Who does this dude think he is? Murray, meanwhile, was astonished they didn’t go in. The fearlessness has rubbed off on Jokic, who is more willing to take postseason games by the throat instead of waiting for them to come to him.

Utah’s Donovan Mitchell has matched Murray shot for shot, giving us one of the great one-on-one duals in playoff history (even if they rarely guard each other).

In the lead-up to Game 7, everyone is asking: What are these defenses supposed to do, other than pray Murray and Mitchell cool? 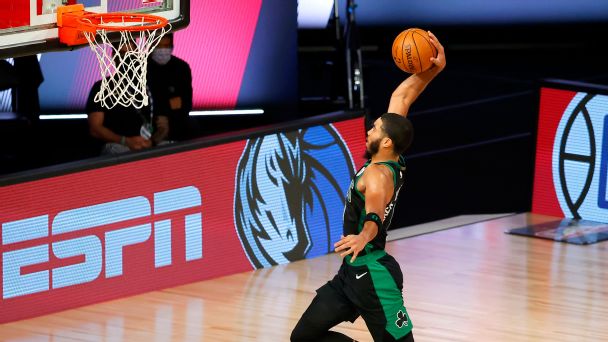 It must be tempting to stay the course. There is no way either guy can continue doing this … right? Royce O’Neale, guarding Murray almost exclusively since the start of Game 2, hasn’t really done anything wrong. Murray is making incredible shots. Jerami Grant is faring as well as could be hoped against Mitchell, and has bothered lots of Utah attempts around the rim.

The popular suggestion has been to trap Murray and Mitchell, take the ball from their hands, and force their teammates to beat you. That is easier said than done in today’s NBA. Defenses can’t lay a finger on opposing scorers. Teams surround lead ball handlers with so much shooting. If those ball-handlers escape traps fast — by dribbling through them, or slipping passes to their screener — the offense plays 4-on-3 (or even 5-on-3). That is a pathway to dunks and open 3s.

If you’re going to trap, you have to trap hard — on the first or second dribble, both defenders with arms spread wide. Half-ass traps, and you’re dead. The line between a stop and a dunk is really thin:

One argument in favor of trapping: Mitchell and Murray are good passers, not great ones. One reason the Murray-Jokic partnership works so well is that Jokic can finish passing sequences Murray starts. Murray isn’t as adept as most star ball handlers at crosscourt lasers to corner shooters. Those are tough for smaller guys. He is amazing at threading entry passes to Jokic, who can then feed teammates anywhere. If the Jazz trap Murray-Jokic pick-and-rolls, expect Jokic to take passes from Murray and start attacking the paint again.

Both Murray and Mitchell have ready counters for traps on the pick-and-roll if they know they’re coming. (Trapping them at half-court is a more radical step.) Their coaches can script others: back-screens at half-court, and screen-the-screener actions in which a third offensive player slams the defender guarding the eventual screener — i.e. the would-be second defender for any trap. There are more. You can’t give Mitchell and Murray steady diets of anything.

There are only two real answers. The first is to switch everything. Denver and Utah are not equipped to do that. The realistic one is to mix up coverages, but tilt the Game 7 mixture toward more aggressive pressure on Murray and Mitchell — especially late in the shot clock, when teams have time for only one or two passes.

Denver has toggled defensive strategies a ton over the past two games depending on a bunch of variables — which Utah player has the ball, whether they get a screen in the middle or on the wing, and who does the screening. The Nuggets started the series with Jokic hanging in the paint — an effort to guard the Mitchell-Gobert pick-and-roll 2-on-2, without sending help from Utah’s lethal outside shooters.

Jokic proved unable to stop Mitchell with a runway. Denver ended up dispatching help from outside, torpedoing the entire purpose of their drop-back scheme. In attempting to concede nothing, Denver conceded everything — dunks and 3s.

The Nuggets have since freed Jokic to venture up toward the level of the pick — the almost-trapping scheme he seems to prefer. The more long, explosive defenders Denver has behind Jokic, the more effective that style of defense is. (It requires a lot of scrambling and read-and-react play.) But the Nuggets are still having Jokic chill in the paint now and then. They are mixing things up to keep Mitchell guessing.

Mitchell has also picked weaker Denver perimeter defenders to attack one-on-one. Denver has mounted stiffer resistance to that gambit since Game 4. The Nuggets have not conceded switches when Mitchell takes a pick from Michael Porter Jr.‘s man; Porter is helping and recovering, and hasn’t been completely out of sorts doing it.

When Mitchell and Jordan Clarkson rampaged toward the rim in Game 6, Denver had help defenders in the paint earlier:

Utah fell a little too much in love with one-on-one play in Game 6; that appears to be a called Mitchell isolation against Grant — no prelude, no switch, no mismatch. They also left some easy kickout passes on the table. Sometimes, their spacing was jumbled in ways that made those passes hard; Clarkson and Mike Conley are crisscrossing in that photo, making it easy for one defender — Torrey Craig — to guard both of them.

Utah can unclutter things by laying out the chess pieces so only one shooter is on the weak side, leaving one poor help defender an impossible choice: help or leave his guy alone.

Malone has gradually found lineups that offer at least the hope of two-way balance. He has brought Porter off the bench since Game 4 and made sure enough of Denver’s longer and smarter defenders — Grant, Craig, now Gary Harris, PJ Dozier for one season-saving stretch of Game 5 — are on the floor at once.

The reshuffling has worked in part because Craig and Grant are 20-of-47 (42.6%) from deep. Can that last? Utah might be wise to amp up the heat on Murray, and coax the ball toward those guys — plus Harris, at 33% from deep this season — late in the shot clock. Stunt at them, sure, but see if their shooting holds up.

The Jazz are already ignoring Paul Millsap, and the gutsiest move on the board for Malone would be benching Millsap in Game 7 — and starting Harris or Craig in his place. I am not emotionally ready to discuss how bad Millsap has been — how old he has looked.

The Nuggets are minus-45 in 138 minutes with Millsap on the floor — second worst on the team. Denver is a hideous minus-62 in Monte Morris‘ 155 minutes. I like the idea of Denver’s reimagined starting five — Morris, Murray, Grant, Millsap, Jokic — but it hasn’t worked. Check your email after tipoff, and the Nuggets are down five. Denver has also fared better in the past two games with Porter at power forward — that is, with Grant and Millsap both resting — and it’s easier to get there if you limit Millsap’s minutes. I doubt Denver benches Millsap given his importance to their culture, but the hook has to be quick.

Millsap hasn’t punished smaller defenders in the post. On the other end, Utah has hunted him some in the pick-and-roll; scoot by Millsap, and only Jokic stands between a Jazz man and the basket:

Mixing it up is not just for defenses.

Both offenses have been smart about varying their methods of attack. Murray has found friendly matchups and some open space by occasionally using someone other than Jokic as his dance partner:

Denver surprised Utah in Game 6 by using Murray as a screener on the ball. Watch for that in Game 7.

In straying a bit too far toward isolation play, Utah lost a little of the unpredictable high-flying motion that flummoxed Denver over the first four games. They can give Mitchell a head start by having him fly off a screen before zipping into a pick-and-roll, or having someone else run one first before kicking him the ball. They kinda forgot about Ingles in Game 6; the Ingles-Gobert two-man game is a way to target Murray and Jokic — forcing them to expend energy.

Porter has been steadier and more alert since Game 4. Utah should still reinstall some of these bad boys to test him.

Other things to watch in Game 7:

• Can Porter and Grant exploit softer matchups? The Jazz have gotten away with Clarkson on one of them for extended stretches. Denver’s base offense — Murray and Jokic — has been so good, it hasn’t mattered. But both Porter and Grant have hurt Clarkson with duck-ins and post-ups here and there. It can be a fail-safe when one of Jokic and Murray rests — if they rest.

• Georges Niang also has defended Porter a lot, and you can see Denver investigating ways to leverage Porter’s speed advantage in that matchup:

• Jokic has done his damage mostly as a pick-and-pop threat. If Gobert is late recovering to him, Jokic launches; he is 20-of-41 from deep — above expectations, just like Grant and Craig. When Gobert rushes at him, Jokic busts out his pump-and-go game.

Murray and O’Neale engage in a fun cat-and-mouse game on these plays. If Murray gets too deep into the paint with a live dribble, it’s hard for Gobert to scurry back to Jokic in time. O’Neale knows that. He tries to anticipate Murray’s pass, and veer back toward Jokic to swipe it:

Murray knows what O’Neale is up to and has been cagey dribbling all the way to the baseline and out to the corner — basically forcing Gobert to switch onto him. Murray hit a very rude step-back 3 over Gobert from the right corner in Game 6. Jokic can mash O’Neale on the other end of that switch — if the Nuggets have time for him to rumble to the block.

Once the shot clock hits 5 or 6, it becomes an extra defender. If Murray has Gobert on an island with the shot clock dwindling, maybe that’s one case when you send a second defender flying at him.

This series is awesome. Denver seems congenitally unable to play anything but an awesome series. Let’s hope the first Game 7 of the first round delivers.