FOR A MOMENT, there was a question if Chris Paul would ever play a game in an Oklahoma City Thunder uniform.

He arrived last summer after two franchise-altering trades, one sending out All-Star Paul George for young prospects and long-term assets and the other acquiring Paul (and more picks) for team icon Russell Westbrook. The deal suggested an inevitable teardown after a decade of high-level championship contention. Most figured Paul wouldn’t want anything to do with that sort of thing at this stage in his career.

“Everybody always tries to tell your story,” Paul said earlier this season. “Everybody said I didn’t want to be here, either, didn’t they?”

The organization explored the NBA trade market for its newly acquired point guard, knowing he is still productive but will be 38 years old in the final year of a deal that will pay him $45 million.

With a war chest of draft capital, along with a few more desirable players on the roster, it seemed to be a matter of when — not if — the Thunder looked poised to transition to a new era. And moving Paul would be the official beginning of knocking down the walls and starting a remodel.

But Paul ended up doing more than setting the table to reboot the franchise. He kept OKC competitive now and repositioned its brand of basketball. He turned the Thunder into a democratic, balanced, ball-moving machine, tapping into the kind of style they envision for the future.

Tracking back to Thanksgiving and up to the league’s coronavirus shutdown on March 11, the Thunder had the second-most wins in the NBA, behind only the Milwaukee Bucks, and third-best overall record (34-13) behind only playoff No. 1 seeds Milwaukee and the Los Angeles Lakers.

After the moves over the summer, those marks seemed ridiculous. During the preseason, ESPN’s Basketball Power Index gave them a 0.2% chance of making the playoffs. They were destined for a full-on rebuild, not battling for a second-round meeting with the Lakers.

“I’ve said this for a long time,” Paul said Saturday, “can’t go by somebody else’s expectations.”

The Thunder’s run ended in seven grueling games to the favored Rockets, taking all 340 minutes and 59 seconds to finally put them out. Paul was magnificent in navigating a difficult series, handling the lows of blowout losses and engineering near-flawless execution to pull out three heart-stopping wins, including a masterclass in Game 6 that showcased his clutch greatness.

In Game 7 on Wednesday, the Thunder had the series where they wanted it — in Paul’s hands. Down one with 25 seconds left, Paul was in his element, the built-for-this moment of moments, but the Rockets wanted it anywhere but there. They sent a double-team at Paul, and as is in his DNA, he tried to make the right play. The ball was deflected, the Thunder’s possession blew up and Paul never got his shot in a 104-102 defeat.

It was a deflating end to a euphoric season for the Thunder and Paul. But they weren’t supposed to be there anyway.

“We fought hard all year,” Paul said postgame. “Obviously a lot of people doubted us, but we didn’t doubt ourselves. We didn’t give a damn about anybody’s predictions going into any series. And any game we expected to win. That’s the way we played all season long, every game, we expected to win.”

Paul’s Thunder, in Year 1, exceeded all expectations — except his own. And even after a fourth consecutive first-round playoff exit, Oklahoma City won’t be rebuilding anything. Not as long as Paul is in uniform.

USE WORDS SUCH as “rejuvenation” or “resurgence” around Paul, and he’ll shoot you a look.

He takes exception to the idea he had a comeback season in Oklahoma City, because that would imply he went somewhere that needed coming back from.

“Resurgence? Where y’all come up with these words?” Carmelo Anthony, the Portland Trail Blazers‘ forward and Paul’s close friend, said in February. “I take issue with it, too.”

Statistically, nothing was all that different. Up in some areas, down in others. The Point God became the Clutch God this season, dominating the league when it mattered. Paul has always been about producing in winning time, but he has found a near-perfect rhythm picking his spots alongside young guards Shai Gilgeous-Alexander and Dennis Schroder.

The number Paul likes to focus on most, though, is games. He has played in all of them, except one — for personal reasons, as he mourned the death of close friend Kobe Bryant. This was Paul’s healthiest season since 2014-15, when he played in all 82 games for the LA Clippers. 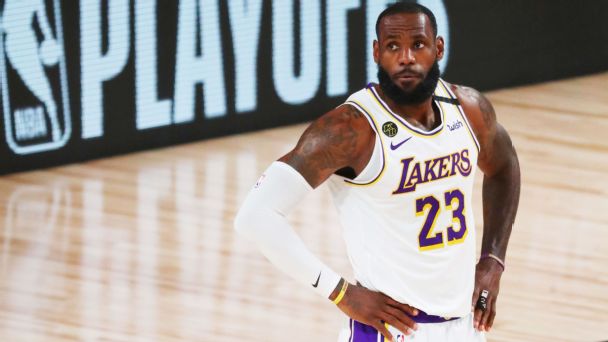 He switched to a vegan diet last summer, he wasn’t icing his knees after games and he remained active in practices. He was even on the other end — the dunking part — of a stunning alley-oop from Westbrook in the All-Star Game, a passing-of-the-torch moment almost too on the nose with symbolism.

There are elements of Paul’s game, though, that are timeless. He has never been the biggest, strongest or fastest on the floor, but he’s almost always the smartest. Paul reads the game at a level few have. It took only a couple of scrimmages for Thunder staffers to gawk at the subtleties of his game, the slight look-offs, the pinpoint passes in shooting pockets, the anticipation of a defender’s next move, the dekes and counterdekes. Paul is a true basketball talisman.

“He’s the best leader I’ve ever been around,” Denver Nuggets head coach Mike Malone, who was an assistant during Paul’s time with the New Orleans Hornets, said earlier this season.

“He’s born to lead. And he embraces it. And he’s not afraid to do it.”

With the Rockets, Paul was cast as a piece to a larger puzzle, confined to the borders of playing alongside perennial MVP candidate James Harden.

Paul was back to playing the role of floor general with the Thunder, not taking turns in isolation or staggering minutes with Harden. But it’s not as if he just got the ball all the time. That’s not what he wants.

In fact, it’s one of the reasons he wanted to leave the Clippers. He got tired of bringing it up all the time, wasting energy when a pesky opposing point guard would pick him up full court.

“All my career, everybody always said I had to have the ball in my hands, but the thing was,” Paul said in February, “I actually wanted to get it out of my hands.”

What Paul does have back in his hands is a team. The Thunder took on his personality this season — a tireless, competitive group unwilling to fold. They shared the ball and played without ego.

“I’m happy for him,” Anthony said. “Because I know how much of a burden off of his shoulders [it was] being in OKC, having an opportunity to just play basketball, be with a group of guys and just enjoy it.”

IT’S SAFE TO say no player has ever had a year quite like Chris Paul’s 2020.

It was fitting he was inside Chesapeake Energy Arena — the center of the NBA shutdown — on March 11 when Utah Jazz All-Star Rudy Gobert tested positive for COVID-19, because, as players’ union president, he had to be at the center of starting it back up.

Paul was vital in establishing a plan to call attention to social injustices and give players a platform. And he was again a leading voice as players hit a crossroads last week in the wake of the police shooting of Jacob Blake.

Amid all that, Paul’s focus never drifted from the Thunder.

“If a young player can understand what a Chris Paul can give them, then it’s a huge boon to his career. Chris is an alpha. He’s a natural leader. He takes no prisoners. He suffers no fools. He’s there to win.”

He watched film with younger players, tutored and coached, boosted and buoyed their confidence.

“Chris is obviously one of the best pure point guards to ever play the game, and no matter the age, he deserves the respect that he gets,” Gilgeous-Alexander said. “Honestly, it’s just a blessing to be in the position I am to get to learn from him firsthand.”

With veterans, there’s often an assumption of mentorship, but it doesn’t always happen.

“It’s less common than one would think,” San Antonio Spurs coach Gregg Popovich said. “There aren’t one or two of those on every NBA team. Some NBA teams don’t have any. He’s a special dude.”

Some who know Paul well note that there sometimes can be an expiration date on his approach. He can grate on people, demanding a lot of them and expecting them to adhere to a standard. He expects to win.

Like in his role as the union president, over the years, he’s learned how to defer. He has learned how to lead without the ball in his hands. And his style has evolved, both on the floor and off it, to let someone else bring it up.

Paul and Gilgeous-Alexander connected quickly, the veteran guard and future of the franchise cracking jokes at each other’s expense and trolling each other’s media sessions early in the season.

Paul was vital in boosting rookie Luguentz Dort‘s confidence after the Rockets effectively stopped guarding him, and Dort went 0-of-9 from 3 in Game 5. Paul constantly encouraged Dort, publicly and privately, and the undrafted rookie responded with 30 points in Game 7.

“If a young player can understand what a Chris Paul can give them, then it’s a huge boon to his career,” Popovich said. “Chris is an alpha. He’s a natural leader. He takes no prisoners. He suffers no fools. He’s there to win.”

Most important, Paul is planting the seeds for the franchise’s reposition, or rebuild or replenish or whatever.

And as usual, his setup was right on time and on target.

Angels’ Ohtani voted majors’ top DH again
Offensive Player of the Year predictions and pros and cons for 10 favorites
Inside Justin Jefferson’s record-breaking, physics-defying rise with the Minnesota Vikings
UFC ‘Fight Like Hell’ Night: Wonderboy vs. Holland — how to watch, plus analysis and betting advice
Messi: Argentina have finally arrived at WC