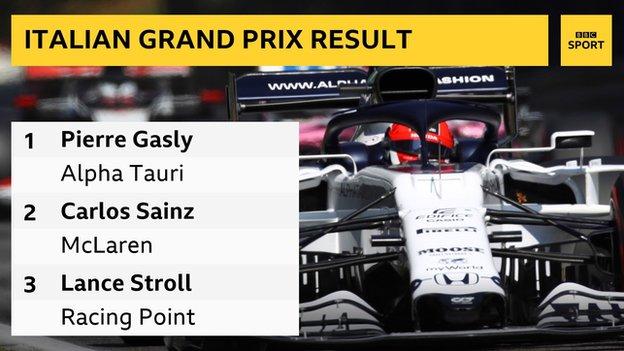 Pierre Gasly took a stunning upset win in the Italian Grand Prix for Red Bull’s Alpha Tauri team in one of the most remarkable races in history.

Lewis Hamilton was dominating until he was penalised for being called into the pit lane for a stop when it was closed.

Two safety cars in quick succession mixed up the order and Gasly took the lead after Hamilton served his penalty.

McLaren’s Carlos Sainz closed him down but the Frenchman just held him off to take his first grand prix victory.

Hamilton fought back from last place, 18 seconds off the back of the pack, to seventh, just two places behind team-mate Valtteri Bottas.

How on Earth did that happen?

Gasly’s win sealed an amazing turnaround in fortunes for the likeable 24-year-old, who just over a year ago was demoted from the senior Red Bull team to what was Toro Rosso and was renamed over the winter.

Gasly has been outstanding ever since, including taking a second place in Brazil last year, and few will begrudge him this win.

It is the junior team’s second grand prix victory – their first also at Monza, with Sebastian Vettel in 2008.

But it was a cruel twist of fortune for Sainz, who had been running in a superb second place to Hamilton and should have been in a position to benefit from the world champion’s penalty.

But the timing of the pit stops around two mid-race safety cars effectively ended Sainz’s hopes.

He, along with all the leaders, pitted during the first safety-car period, triggered by a breakdown for Kevin Magnussen’s Haas.

This was when Mercedes made the error that cost Hamilton his 90th Grand Prix win, calling him in as soon as the safety car was thrown and not noticing that race director Michael Masi had closed the pit lane because marshals were dealing with Magnussen’s car close to the entry.

Gasly had made his stop a couple of laps before the first safety car so did not stop again, and this promoted him to third behind Hamilton and Racing Point’s Lance Stroll for a mixed-up field at the restart.

Ferrari’s Charles Leclerc was soon into fourth place, passing both Alfa Romeo cars into the first chicane on the first lap of racing, but the Monegasque then lost control at the Parabolica and crashed heavily, causing the race to be reflagged for repairs to be made to the barriers.

The race was re-started with a standing start with Hamilton ahead of Stroll, Gasly, the Alfa Romeos of Kimi Raikkonen and Antonio Giovinazzi and Sainz.

Hamilton finally has a bad race

Hamilton, for reasons unclear at this stage, missed the pre-race anti-racism demonstration, and once the race started, what had been looking like a routine win for Hamilton turned on its head on Mercedes’ fateful decision.

The race surrendered to him at the start, when Bottas was slow away and had a dreadful first lap, passed by car after car as he slipped down to sixth place.

From then on, Hamilton was untouchable until Mercedes made their mistake.

Hamilton went to see the stewards during the stoppage to check the penalty was fair. He took the re-start from pole, but stopped at the end of the first lap, and his penalty demoted him to last, 19 seconds off the back of the pack.

He soon started lapping three seconds faster than anyone else and caught the field in no time, scything past car after car for a useful haul of points.

Bottas, his car struggling with overheating, could not make progress and became stuck behind other cars all race.

His fifth place moves him ahead of Red Bull’s Max Verstappen in the championship after the Dutchman retired with collision damage, but Hamilton is 47 points ahead – almost two clear wins – with the season close to its half-way point.

Stroll threw away his opportunity for a maiden win with a poor start, and Gasly moved into second behind Hamilton, who pitted at the end of the first lap of racing to serve his penalty.

By the time Sainz had passed Raikkonen, Gasly had a four-second lead.

The Spaniard closed that down to be right on his tail at the start of the last lap but Gasly managed to hold him off.

He is the first Frenchman to win a race since Olivier Panis won the Monaco Grand Prix for Ligier in similarly unlikely circumstances in 1996.