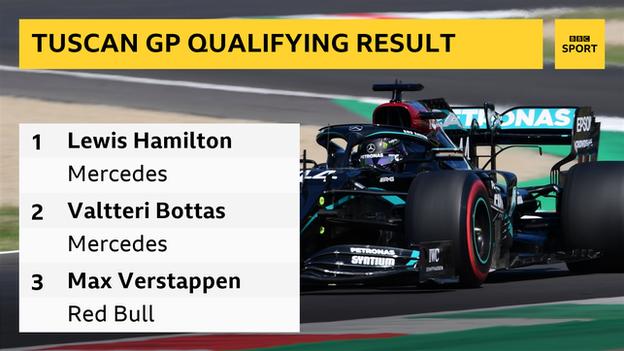 Red Bull locked out the second row, Max Verstappen ahead of Alex Albon.

And Charles Leclerc gave Ferrari something to celebrate at their 1,000th grand prix with fifth place.

Hamilton does it when it matters

Bottas had topped all three practice sessions and Hamilton looked to be on the back foot heading into qualifying.

But Hamilton was quickest in the second session by 0.013secs and he extended his margin on the first laps of the top-10 shootout.

Hamilton did not improve on his final lap, and Bottas’ hopes of doing so were dashed when Renault’s Esteban Ocon had a spin and brought out yellow flags.

Hamilton said: “It has been really close this weekend. This is a really challenging circuit and Valtteri was quicker than me all day yesterday and this morning and even in Q1.

“I have been working really hard in the background to improve on my lines and set-up and I finally got the lap I needed.

“At the end, I think the wind picked up and I wasn’t able to go any quicker. But I got the job done.

“It’s crazy. You go through Turns Six, Seven, Eight and Nine at 180mph and the G-force is insane.”

Bottas said he felt the Ocon incident had cost him pole position since the 70th Anniversary Grand Prix at Silverstone last month.

The Finn said: “I still had more and I was waiting for the time to get it right but I didn’t get the opportunity. For sure it’s disappointing.”

Verstappen’s margin in the Red Bull was the smallest it has been to pole position all year.

“I didn’t expect to fight in qualifying but this weekend it has looked very promising,” he said. “To be third we can be very happy with that.”

Leclerc had said coming into the weekend that he expected Ferrari to be stronger at the track they own after two disappointing showings at Spa and Monza, but he did not expect to be the best of the rest.

He was more than 0.5secs quicker than his four-time champion team-mate Sebastian Vettel, who qualified 14th.

Leclerc headed the Racing Points, with Sergio Perez ahead of Lance Stroll despite the Canadian benefiting from a new bodywork package that the Mexican, who was informed before the weekend he would be dropped in favour of Vettel for 2021, will not get until the next race in Russia.

Renault’s Daniel Ricciardo, McLaren’s Carlos Sainz and Ocon completed the top 10, with Lando Norris in the second McLaren in 11th.

‘If in doubt, flat out’ – bravery from Russell

George Russell, who missed the entire final practice session with a brake problem, put in an outstanding performance to pip team-mate Nicholas Latifi for 18th place despite running wide and bouncing over the gravel and grass on the exit of the ultra-fast Savelli right-hander.

Russell kept his foot down through the moment and into the daunting, flat-out Arrabbiata double right-hander and sneaked ahead of Latifi by 0.088secs. In doing so, he kept up his record of never having been out-qualified by a team-mate in F1.

“I have no idea [how I kept it on track],” said Russell, who revealed that the team had trimmed the car’s downforce level ahead of qualifying. “If in doubt, flat out.

“I knew Nicholas was ahead of me on the previous two runs and I knew if I didn’t finish that last lap he was going to finish ahead of me. I kept it pinned, damaged the diffuser quite a lot. Q2 was definitely on the cards.”