But the scrap between the welterweights lacked any drama, with a dominant Covington stopping Woodley early in the fifth round.

How lopsided was the fight? Covington outlanded Woodley 78-34 in significant strikes and 232-67 in total strikes, according to UFC Stats. On his back, Woodley appeared to attempt a guillotine on Covington in the fifth. But Woodley, who now has lost three straight, screamed in agony, citing an apparent rib injury, which forced referee Dan Miragliotta to stop the bout.

Love him or hate him Covington can fight ! @ColbyCovMMA Very hard to see this last stretch of fights for my man @TWooodley. That’s like 15 rounds in a row where he hasn’t been able to get going. Gotta take a real look at what’s next. But great win by Colby!!

While the main event failed to meet expectations, the performances by several prospects were praise-worthy, especially that of Khamzat Chimaev.

After setting a record in July by winning his first two UFC fights in the span of 11 days, Chimaev kept his stock soaring by knocking out veteran middleweight Gerald Meerschaert with a straight right hand just 17 seconds into the fight.

Johnny Walker and Mackenzie Dern also shined at the UFC Apex. Walker rallied in an exciting first round to stop Ryan Spann with elbows and hammer fists at 2:43. Dern, meanwhile, showed her jiu-jitsu expertise by submitting Randa Markos with an armbar at 3:44 in Round 1.

After those performances, future UFC Hall of Famer Donald Cerrone and Niko Price battled in the co-main event. The fight finished in a draw, but it didn’t lack for action.

Tyron Woodley showed up, but Colby Covington proved he was just better.

Okamoto: The big question for me going into the main event was whether Tyron Woodley wants to do this anymore. I really thought it was a fair question. He showed nothing against Kamaru Usman and Gilbert Burns in his last two fights. He seemed to accept defeat. He didn’t let his hands go. It’s not like he all of a sudden forgot how to fight. He still looked explosive. He just looked mentally defeated.

On Saturday, I did see a guy who wanted to win. I saw a guy who really wanted to turn back the clock and beat a guy he’s had a very long, public feud with. This was not a fun fight for Woodley to lose. This one will likely stay with him. And he tried in the first few rounds. He tried to stay off the fence, he was throwing intelligent shots, he was trying to win. But it didn’t matter.

The very top of this division is too much for Woodley. And I don’t know what he’s going to change to turn that around. I don’t know what he’s going to fix to turn into a potential UFC champion again. So now, the question is where he goes from here. What is he willing to do? What matchups is he willing to take? If the UFC wants to use him on main cards against the up-and-comers, use his name to build the next generation, will Woodley be willing to play that role? Will the “spoiler” opportunities keep him in the game? We’ll see.

Covington is good. He nearly beat Usman last year, took it to the fifth round. Does he get the next title shot? Not sure. And don’t forget, he came back from a jaw injury, and didn’t look gun shy at all out there. Colby is a problem for anyone in this division.

What did Donald Cerrone show us on Saturday night?

Wagenheim: “Cowboy” is not done yet. He didn’t get a victory on Saturday night, just the first draw of his 53-fight pro MMA career, so his winless streak now extends to five in a row. But over three rugged rounds in the cage with Niko Price, Cerrone showed that his resilience and drive to win are still intact. And that’s enough to keep alive the career of the man with the most victories in UFC history. 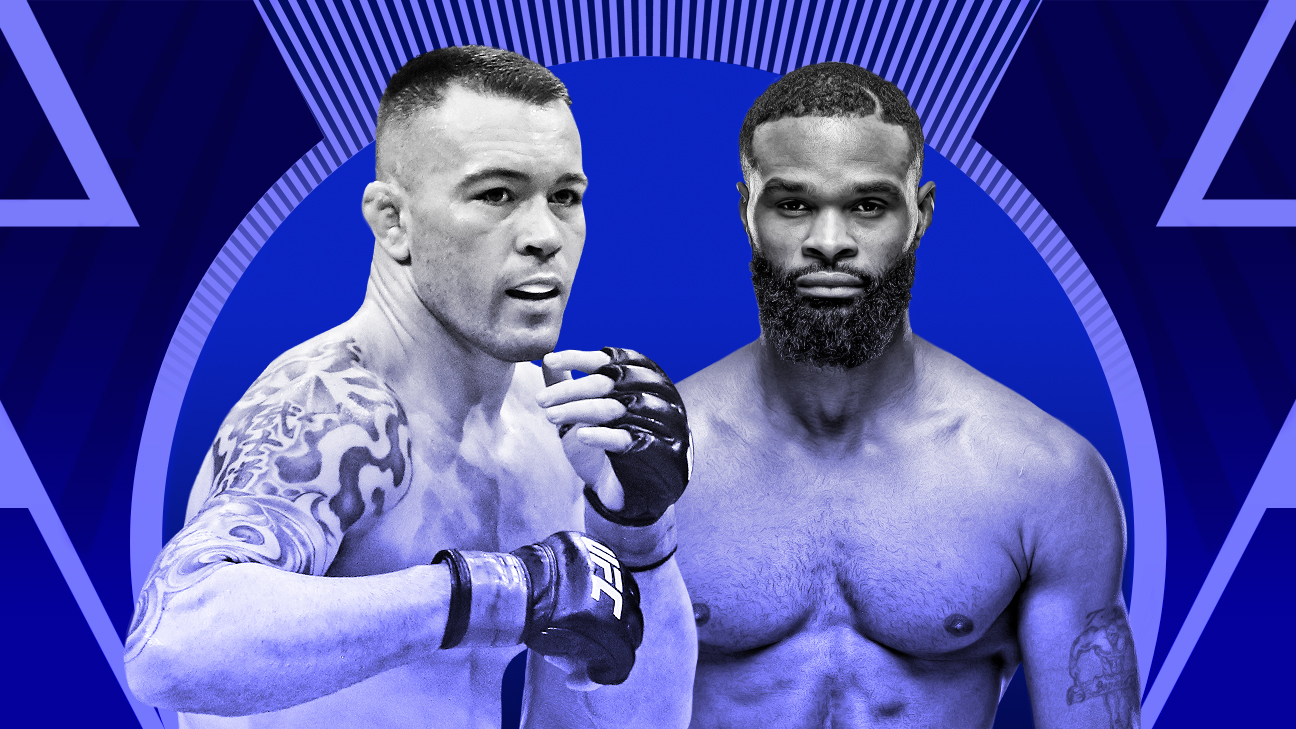 All fights from UFC Fight Night: Covington vs. Woodley will be available to watch on ESPN+.

It wasn’t looking good for Cerrone early on. A notoriously slow starter, he got lit up by Price during stretches in Round 1, and many of the punches and kicks coming his way could very well have been finishing blows. But despite also absorbing two eye pokes, Cerrone was still standing at the end of five minutes. And from that point on, he was always in the fight, at times landing the more damaging shots. It was encouraging to see that Cerrone still has that comeback in him.

Cerrone is 37 years old and has seen better days as a fighter. But don’t forget that those four straight losses coming into Saturday had been against Anthony Pettis, a former champion; Conor McGregor, a former two-division champion; Justin Gaethje, the current interim champion at lightweight; and Tony Ferguson, a former interim champ. There are not a lot of fighters in the UFC who wouldn’t be 0-4 against those guys.

Cerrone might think he still has a championship run in him. That would be a long shot. If you’re pining for the old “Cowboy,” go watch his clips from 2013 through 2016. That was a successful period for him, with fun-to-watch fights. Nowadays, Cerrone is at a point in his career where a competitive, fun battle with an unranked opponent is all we can reasonably expect. And I’ll take that over having the UFC book him as a steppingstone for the next generation.

Raimondi: Chimaev’s manager Ali Abdelaziz said in June, before the UFC signed the top prospect, that Chimaev is like Khabib Nurmagomedov 2.0. Some people rolled their eyes. Nurmagomedov is perhaps the best fighter on the planet. Chimaev didn’t even have 10 pro fights. Well, fast forward three months. Chimaev is the quickest UFC fighter in the modern era to earn his first three wins in the promotion. And he has completely dominated.

One more insane note: He’s done it in two weight classes. Chimaev is 2-0 at middleweight and 1-0 at welterweight. Next up is supposedly Demian Maia at welterweight. But I think his best future could be at middleweight. At 185 pounds, he’s faster and more athletic than most others — and his strength and wrestling still seem to translate seamlessly to the heavier division.

Welterweight is also one of the deepest weight classes in the world; middleweight is a shorter trip to the top. On the other hand, Chimaev apparently wants to fight in both divisions. And, honestly, at this point who is going to tell him he can’t?

Has Johnny Walker figured it out, with less dancing and better fighting?

Murphy: Walker returned to the win column with a TKO after a wild, tumultuous first round Saturday. While objectively entertaining, it did not reveal much new information regarding Walker’s potential to contend for a belt.

Walker has incredible physical skills: size and power that makes him a knockout threat to anyone. We saw that again in finishingRyan Spann. Walker needed just two elbows and two hammer fists to sleep his opponent, all while actively defending a takedown against the fence. Takedown defense, though, was an issue for Walker again. Spann went 2-for-2 — though he paid the price for the latter — and Walker has allowed a 50 percent takedown success rate in his last three fights. Spann also scored two knockdowns. Though Walker recovered and showed admirable resiliency, questions persist around his striking defense, recklessness and chin. Corey Anderson floored Walker early en route to an upset over the Brazilian at UFC 244, as well.

Walker’s stock rises after this win over Spann, certainly, but his scouting report looks unchanged. The tools are there but the same concerns remain. Also unchanged: Walker’s fights are always fun to watch. Only slightly less important than being a bona fide contender is being must-see TV. And Johnny Walker is absolutely that.

Is Mackenzie Dern finally on track after weight-cutting issues?

Raimondi: Four years ago when she debuted as a pro, Dern was thought to be a can’t-miss prospect. She was the best pound-for-pound female Brazilian jiu-jitsu competitor in the world at the time and still in her early 20s. There have been some starts and stops since then. Dern struggled with making strawweight, missing the mark in two of her first three fights. In her second UFC fight in 2018, she missed weight by seven pounds. Since having her first child last year, Dern seems to have completely corrected the weight issues — and the performances have continued to get better, too.

Dern once again provided evidence why she’s ahead of everyone else at women’s 115 pounds on the ground. Randa Markos is an excellent MMA grappler, but she made a huge mistake following Dern to the mat Saturday. Dern is on another level in terms of jiu-jitsu, which makes her a threat against anyone in what has become an extremely intriguing division.