Manchester United have warned Paul Pogba they are not willing to give him a bumper pay rise to keep him at Old Trafford, sources told ESPN.

The club are keen to extend Pogba’s stay with a new long-term deal, but sources have said it will have to be a reasonable offer. After finally getting Alexis Sanchez off the books in the summer with his permanent move to Inter Milan, executive vice-chairman Ed Woodward and manager Ole Gunnar Solskjaer are in agreement the wage structure will not be broken for any player, including Pogba.

Sanchez still had two years left on his mammoth contract at United — worth around £400,000-a-week before bonuses — before he left and the club saved close to £40 million in wages by negotiating a deal with Inter and ending his stay early. Pogba would be given a pay rise on his £270,000-a-week deal if he signs a new contract, but intermediaries involved in preliminary talks have been clear that, despite Pogba’s high profile, Woodward and Solskjaer will not be offering extortionate wages to convince him to stay. A “Sanchez-style” contract is out of the question. 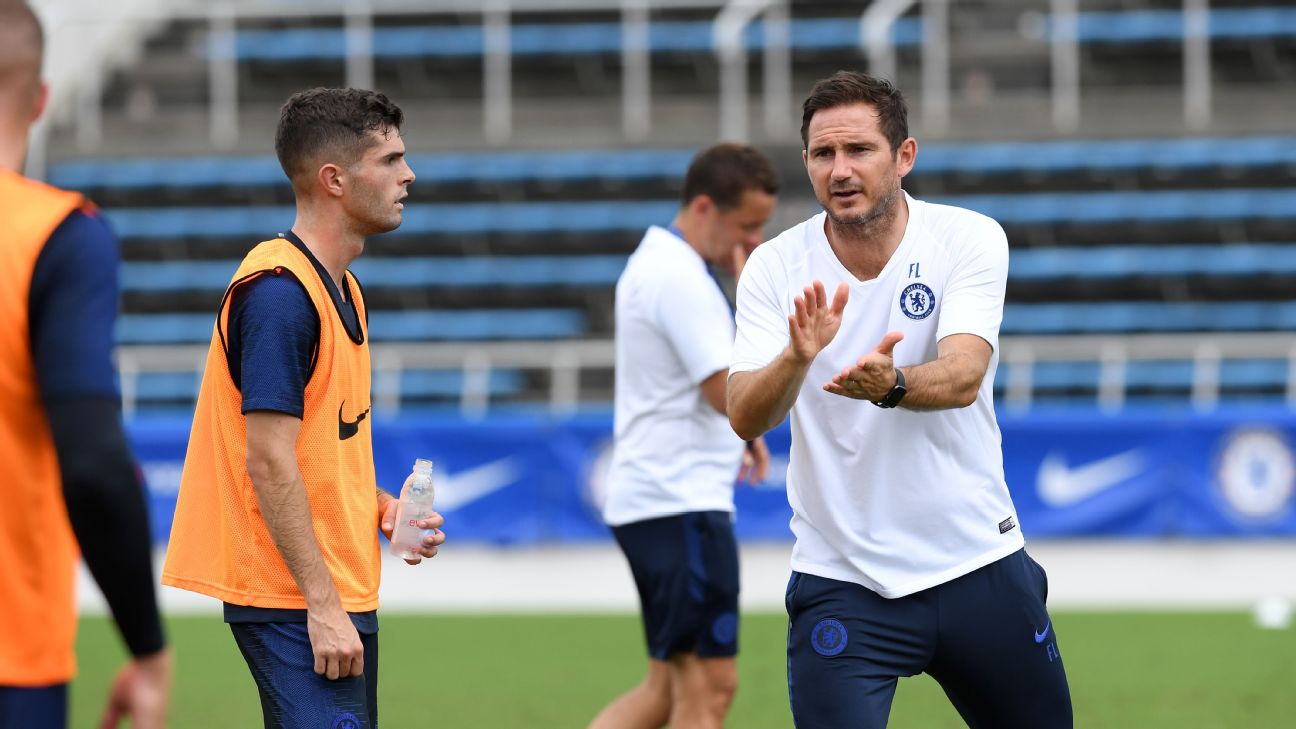 • Lampard didn’t rate Pulisic as he was U.S.
• Van Dijk set for surgery, faces months out
• Ozil hits out at lack of loyalty after axe
• Chelsea name Cech as emergency GK
• Liverpool confused by VAR – sources

Sources said United are “relaxed” about Pogba’s future and Woodward remains open to allowing the 27-year-old to run into the final year of his deal if fresh terms cannot be agreed. United recently exercised their option to extend Pogba’s deal at the club until 2022. Based on that option the France international would be allowed to open negotiations with teams outside the Premier League from January 2022 and leave on a free the following summer.

Meanwhile, the player faces a battle to win back his place in Solskjaer’s team after being left on the bench for back-to-back victories against Newcastle and Paris Saint-Germain. Sources said Pogba hasn’t yet made a decision about where his future lies, although he has publicly courted interest from Real Madrid, saying during the international break it would be “a dream” to sign for the Spanish giants. Former club Juventus have also expressed interest in the past. — Rob Dawson

Axel Tuanzebe‘s impressive performance while marking Kylian Mbappe during Manchester United‘s 2-1 Champions League victory against Paris Saint-Germain on Tuesday was no surprise to United boss Solskjaer, who believes the 22-year-old is a future captain of the club due to his qualities on and off the pitch, sources told ESPN.

Solskjaer and his coaches have identified the need for the United squad to be more vocal and demanding of each other, and the signings this year of Bruno Fernandes and Edinson Cavani have been made with that requirement factored in, with both players possessing the leadership qualities demanded by the manager.

But despite being restricted to fewer than 20 first-team appearances for United as a result of injury and two season-long loan spells at Aston Villa, Tuanzebe’s character and readiness to challenge his teammates has been noted by Solskjaer and senior figures at Old Trafford.

Tuanzebe captained United in the Carabao Cup win against Rochdale in September 2019, with Solskjaer handing the youngster the armband ahead of more experienced starters including Pogba, Phil Jones and Jesse Lingard.

Solskjaer justified the surprise decision at the time by saying: “It is just a way of telling Axel that we trust him,” but sources said that United’s faith in Tuanzebe runs much deeper and his leadership qualities, combined with his pace and his ability to read the game, mark him out to be a first-team regular and a player with the attributes to become captain in the long-term. — Mark Ogden

ESPN FC’s Craig Burley says Solskjaer had the guts to make the moves that his PSG counterpart didn’t.

Liverpool midfielder Fabinho is set for talks over a new deal after the Brazil international became a key player for Jurgen Klopp’s side, sources told ESPN.

Fabinho, 27, still has two years left on the contract he signed when he joined Liverpool from Monaco for €50m in 2018, but he has become such an important player that he is set to be rewarded with a new deal.

After joining on July 1, he didn’t make his first appearance until Sept. 18 and waited until Oct. 18 for his Premier League debut as Klopp integrated him into Liverpool’s culture and playing style. Since he secured a place in the team, though, he played a huge part in Liverpool winning the Champions League in 2019 and the Premier League in 2020.

He has become one of Europe’s best holding midfielders and his versatility makes him indispensable to Liverpool, who used him at centre-back for the 1-0 Champions League win against Ajax on Wednesday with Virgil van Dijk ruled out through injury. — Julien Laurens

There’s growing concern at Real Madrid over Eden Hazard‘s latest injury setback, with the €100m forward facing another longer-than-expected layoff which could see him absent until after the next international break.

Hazard was last named in a matchday squad on Sept. 30 for Madrid’s La Liga game with Real Valladolid — due to be his first appearance of the season — but he was withdrawn hours before kick off with a muscular problem in his right leg. An initial diagnosis suggested he would miss three to four weeks, but coach Zinedine Zidane admitted this week that “his injury was a bit more than we thought.”

Since then, the Belgium international had been targeting Madrid’s Champions League clash with Inter on Nov. 3 for a return, but the club would prefer to wait rather than risk another relapse. That means Hazard might not feature until the trip to Villarreal on Nov. 22, after the upcoming round of international matches.

Hazard has suffered one injury blow after another — fracturing his ankle playing against Paris Saint-Germain last November and requiring surgery after a repeat of the same injury against Levante in February — since moving to the Bernabeu from Chelsea in 2019, describing last season as “the worst of my career” and facing repeated questions from the media over his form and fitness. — Alex Kirkland and Rodrigo Faez

Ale Moreno wonders if Eden Hazard will go down as a bad signing for Real Madrid due to injury concerns.

PSG coach Thomas Tuchel wanted to sign Chelsea defender Antonio Rudiger and striker Luis Suarez from Barcelona during the summer transfer window as he looked to strengthen the Champions League finalists’ squad ahead of another tilt at European glory this season.

However, sporting director Leonardo was not keen and vetoed moves for both, much to the disappointment of Tuchel.

Sources told ESPN that the pair clashed over transfers during the summer window and tensions between the pair have increased after the club were beaten 2-1 at home by Manchester United in the Champions League on Tuesday.

A couple of weeks ago, Tuchel publicly moaned about the lack of arrivals, with Leonardo responding that he must “respect the choices of the sports management” amid speculation that Mauricio Pochettino and Massimiliano Allegri are options to replace Tuchel on the PSG bench.

Sources said that the manager thinks Leonardo didn’t do enough to strengthen PSG’s squad and doesn’t understand why the sporting director was not keen on Rudiger, who would have come on loan, and Suarez, who left Barca for free, so tensions continue. — Julien Laurens

Frank Leboeuf reacts to the latest in a public feud between PSG manager Thomas Tuchel and director Leonardo.

Gareth Bale‘s favourite Madrid golf course has had to be bailed out of financial trouble just weeks after its most high-profile customer left for a return to the Premier League with Tottenham.

Golf fanatic Bale was a regular at the swanky Golf Santander complex, near his home to the west of Madrid, during his seven-year stay in the Spanish capital. Bale was even reported to have taken to the greens in August while his then-Real Madrid teammates were preparing for a must-win Champions League knockout tie with Manchester City, after refusing to travel.

Dan Thomas is joined by Craig Burley, Shaka Hislop and others to bring you the latest highlights and debate the biggest storylines. Stream on ESPN+ (U.S. only).

The 18-hole course in upmarket Boadilla del Monte was designed by the legendary, late Seve Ballesteros — winner of five majors — and has consistently been named one of Europe’s best.

Now its backer, Banco Santander, has approved a €9.1m capital reduction to compensate for losses caused by significant recent investment in the facilities, as well as 2020’s drop in international tourism.

A spokesman for the bank told ESPN the move was a “mere accounting adjustment” in the company that runs the course alongside its other sporting centres used by employees and the public. — Alex Kirkland and Rodrigo Faez

Mark Ogden believes talks of a European Premier League are far too optimistic to be true at the moment.

UEFA, along with most leagues and clubs, were caught by surprise when news of a $6 billion (£4.6 billion) European Premier League broke on Wednesday, but sources told ESPN there is little concern among leagues about it. Instead, they see this as a unique opportunity to reshape the global football calendar.

The format of the Champions League for the 2024-27 cycle must be decided next year, with the biggest clubs wanting a larger slice of the financial riches, and to play more games against their top rivals from other leagues.

– Marcotti: How a Super League could happen

UEFA, which stands to lose most from a breakaway if its marquee clubs form a new competition, has condemned the idea of any kind Super League, calling it “boring.” But sources say it is aware that investment firms are circling around football as a relatively safe bet to recover from the coronavirus crisis. In Italy, Serie A is being heavily targeted by CVC Capital Partners and Advent International, who are working together to take a stake in the league’s commercial rights.

Sid Lowe joins to recap Real Madrid’s superb performance over the weekend and whether Hazard can spark a title push. Plus, the Premier League returns this week.

While the top clubs may be attracted to go their own way with the promise of a large payday, sources said the top leagues are confident a solution will be found that suits the game as a whole, and that any breakaway would jeopardise plans to find a wider solution.

With FIFA’s international match calendar due for renewal in 2024, along with the Champions League, there may not be another chance to reshape how club and international football fits together for many years.

Sources said that the World Leagues Forum, which represents 41 of the leading leagues around the world, has been in regular dialogue with FIFA and UEFA to discuss the calendar. Talks continue to find a solution for all, but they have not involved any breakaway from UEFA competition from the top clubs. — Dale Johnson

Ballmer touts Clips’ title hopes ‘if we stay healthy’
Suit vs. Texans alleges team ‘enabled’ Watson
Sources: Stevenson to defend belts on Sept. 23
Keys, Coric out of Wimbledon due to injuries
Sources: Murphy out for UFC 276 bout vs. Tate