ARLINGTON, Texas — The Kirk Gibson home run had endured, but it had also run its course. The clip remained a constant presence around the Los Angeles Dodgers, consuming their broadcasts and playing on a near-constant loop at their stadium. It stood as the seminal moment from a bygone era, of a championship captured more than three decades earlier. A new memory had long been desired.

“We’ve heard it a lot, and we’ve seen a lot of highlights, and it’s fantastic,” Dave Roberts, the fifth-year manager, said. “But we wanna make our own mark on Dodgers history.”

On Tuesday night, in a neutral stadium 1,400 miles away, at the conclusion of a bizarre season played amid a global health crisis, these Dodgers finally made their mark. Their 3-1 victory over the Tampa Bay Rays in Game 6 of the World Series won them their first championship since Gibson famously hobbled to the batter’s box in 1988, a fitting coronation for a dominant franchise.

Tony Gonsolin, counted on to function as a traditional starter, recorded only five outs. But four relievers — Dylan Floro, Alex Wood, Pedro Baez and Victor Gonzalez — retired 13 of the next 14 batters, keeping the game within reach long enough for the Dodgers to get past an electric Blake Snell and tap into the Rays’ bullpen.

After Rays manager Kevin Cash turned to Nick Anderson with one on, one out and the top of the order due up a third time in the sixth, the Dodgers’ offense finally came alive. Mookie Betts doubled, Austin Barnes scored on a wild pitch, and Betts slid home safely on a grounder to the right side. Betts, the offseason acquisition who has somehow exceeded expectations, tacked on an important insurance run with a solo homer in the eighth, and Julio Urias cruised past the finish line, leading the Dodgers to the title — 16 days after the Los Angeles Lakers completed their championship journey.

Roberts, second-guessed for a litany of his October decisions in recent years, is a champion. Justin Turner, a lifelong Dodgers fan who identifies Gibson’s homer as his first baseball memory, is a champion. Clayton Kershaw, ridiculed for his postseason shortcomings, is a champion. Kenley Jansen, stripped of his title as the team’s closer, is a champion.

The Dodgers, kings of the National League West for eight straight years, are finally champions again. 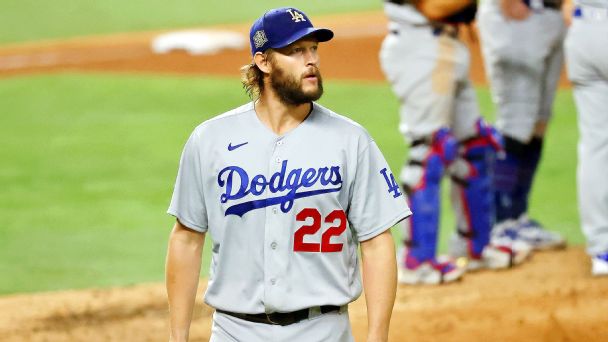 After years of October frustration, Clayton Kershaw got to walk off the field with an ovation and with a lead. Jeff Passan &»

Their journey began with the most aggressive move of the Andrew Friedman era, finalized on Feb. 10, when a substantial chunk of a promising future was sent to the Boston Red Sox for one season of Betts. The spring training that followed filled Friedman with a level of optimism he rarely allows. The older players looked sharp, the younger players had come into their own, and Betts was already striking an important tone about commitment.

Then the coronavirus pandemic swept through the United States, canceling what remained of spring training and shutting down the sport for more than three months.

“The most difficult thing professionally during the quarantine period was the periods of time when I felt like we would never get a chance to watch this team play,” Friedman said. “That was extremely difficult.”

When Major League Baseball resumed in July, the Dodgers proved to be one of the greatest teams in baseball history. 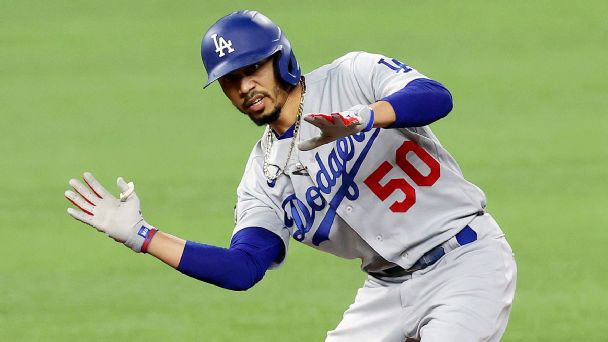 L.A. knew it was getting an MVP. But some of what Mookie does best goes well beyond what shows up on the back of his baseball card. Alden Gonzalez &»

They won 43 of their 60 games and finished with the fourth-highest per-game run differential in the modern era. Cody Bellinger, Max Muncy and Joc Pederson struggled through a shortened, fanless season with no access to in-game video, but the Dodgers’ offense still led the majors in runs. Their starting rotation lost the likes of Hyun-Jin Ryu, Rich Hill, Kenta Maeda and David Price, the latter of whom opted out, and yet it still boasted the sport’s second-lowest ERA. Betts, signed to a record extension before Opening Day, played like an MVP. Corey Seager returned to being one of the game’s best shortstops. Dustin May and Gonsolin each made his case for Rookie of the Year honors. Will Smith emerged as a premier catcher. And Kershaw tapped back into the stuff of his prime.

The Dodgers swept through the first two rounds of an expanded postseason, and it wasn’t until they faced the upstart Atlanta Braves in the National League Championship Series that they truly felt challenged.

“We showed up and out-talented everybody every day, and it was easy,” longtime Dodgers pitcher Wood said. “We never had much of a challenge in the regular season or the first two rounds, and then you get punched in the face, go down 2-0, and it’s like, ‘Whoa, what just happened?’ We had just been out-talenting everyone the whole entire season, and we didn’t really know what we were made of, who we were, truly, as a team.”

The Dodgers split the next two games, fell behind 3-1, and were eager to find out. The extensive text chain involving every member of the team — including Price, who made his presence felt despite his absence — began to develop a theme built around the possibility of accomplishing something special. What followed were three consecutive wins — all of them tight, all of them involving a game-changing defensive play from Betts — and a feeling of invincibility.

The World Series functioned as a coronation. Their fans traveled en masse, making a neutral-site, quarter-capacity stadium feel like an enduring home venue. The Dodgers’ offense — led by Seager, Turner and Muncy in the Nos. 2-4 spots — set new benchmarks for home-run variance and two-out production. Kershaw won two games in the same postseason series for the first time in his career. Walker Buehler proved himself, once again, as a bona fide ace.

The Dodgers stomached a heart-wrenching walk-off loss in Game 4, committing a comedy of errors to let two runs score in the bottom of the ninth — but they came right back to win Game 5. In Game 6, the Dodgers did what they do best — keep the game close, wait out a dominant starting pitcher and pull away late.

The 2020 campaign was unlike any other, with protocols that oftentimes sapped joy from the players. The shortest, most unconventional regular season was followed by the longest, most volatile postseason. And it was the Dodgers, trapped inside a Dallas bubble for most of October, who conquered it. When it began, they were asked if winning a championship this year would feel as thrilling.

By the end of it, many had come around on the thought that it might be even more special.