Editor’s note: This is the first in a series of six pieces that shows how professional sports owners in America contribute to political campaigns, why they spend millions in the space and what that financial power means as athletes across sports continue to embrace activism of their own.

American professional sports owners have contributed nearly $47 million in federal elections since 2015, according to research by ESPN in partnership with FiveThirtyEight, including $10 million to Republican causes and $1.9 million to Democratic causes so far in the 2020 election cycle.

That strong Republican lean is consistent with owners’ spending in the 2018 and 2016 federal elections as well. A deep search in the Federal Election Commission database of campaign finances for principal owners, controlling owners, co-owners and commissioners from the NBA, NFL, NHL, WNBA, MLB and NASCAR reveals that this deep-pocketed group has sent $34.2 million (72.9%) to Republican campaigns or super PACs purely supporting Republican causes, compared to $10.1 million (21.5%) to Democrats over the past three elections. Less than 6% of contributions went to bipartisan or unaffiliated recipients.

The research includes more than 160 owners and commissioners spanning 125 teams, though no list of this kind can be completely comprehensive. Only current owners in each league and only their contributions while they have been involved with their franchises were included. Spouses and relatives were not considered unless they also play a controlling role in the ownership group. If a contribution appeared to be from an owner but could not be confirmed, it was not included. And, as is the case with many millionaires and billionaires, owners have a number of ways to hide their political spending.

Some of the biggest takeaways from the data are below. And in the coming days, the series will delve into:

Contemporary sports ownership has become an exclusive club with entry fees that reach into eight- and nine-figure territory. The rarefied Americans who can afford those fees tend to skew older, whiter and more male. As political donors, these owners skew toward the GOP.

Of the 160 owners and commissioners in ESPN’s database, 74 contributed a majority of their publicly searchable funds to Republican campaigns, with 48 donating a majority to Democrats and the rest sending most of their money to causes that aren’t fully aligned with either party.

But while that overall summary is interesting, a more pronounced signal begins to emerge when we look more closely at this group’s larger political donations. There are 40 owners who have donated at least $100,000 to Republican causes over the six-year period, compared to 23 owners topping $100,000 to Democrats, helping lead to these splits: 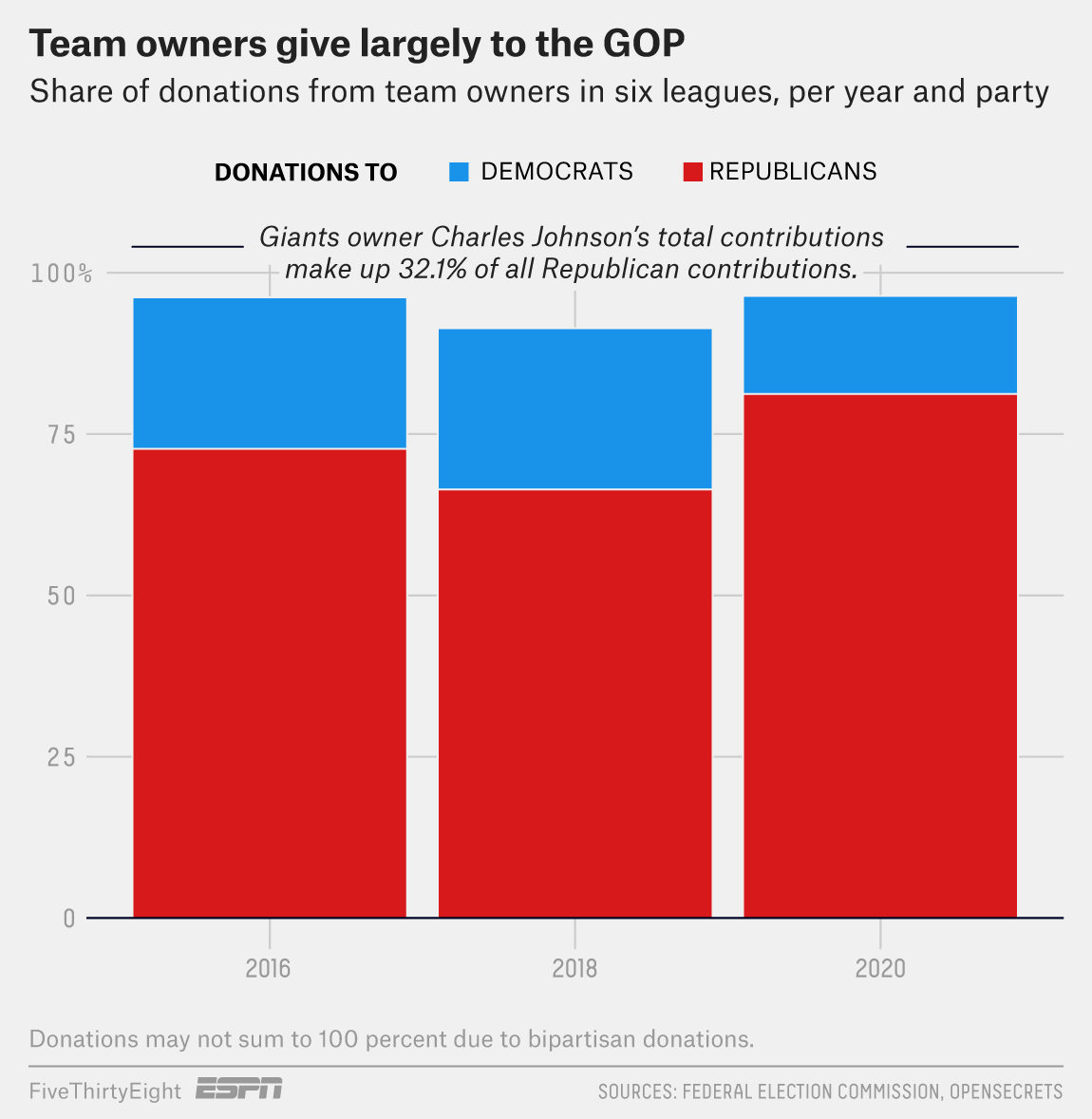 In total, here is the election-cycle contribution breakdown for owners and commissioners for these leagues:

It’s important to note that not all data for the 2020 election cycle is publicly available at our time of publishing. Some of the biggest super PACs had filed only individual contributor data to the FEC as of June 30, meaning their most recent contributions aren’t included in our totals.

Drilling down deeper into the data, we can see that federal contributions in each league lean red, except for in the WNBA: 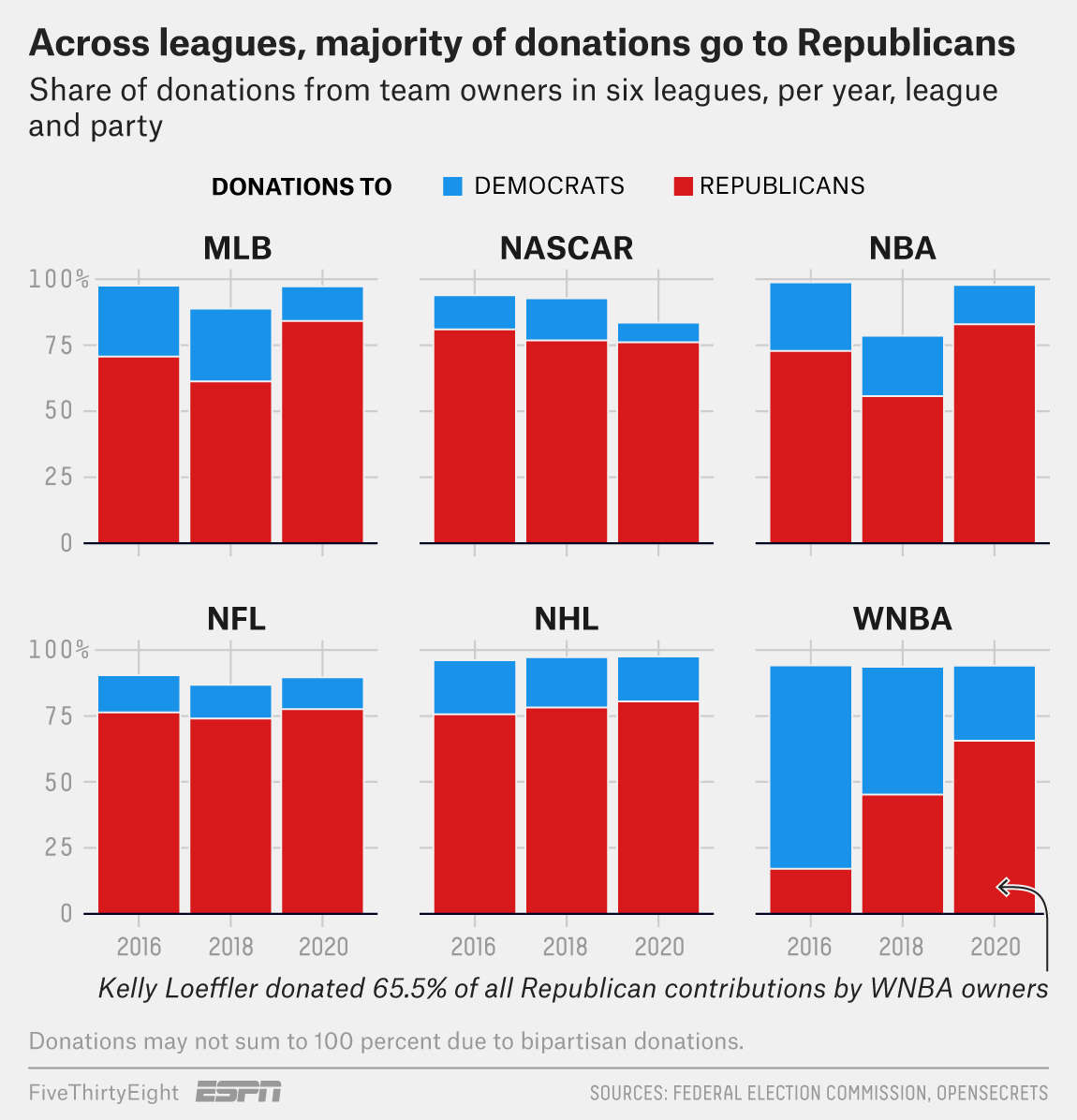 Expanding to all the leagues in our research, here are their totals to each party over the six-year period:

Owners’ conservative lean extends into the current presidential cycle as well. Americans have donated similar amounts to both Joe Biden and President Donald Trump, but owners are giving more to Trump, according to the database.

Thirteen owners have contributed directly to Trump’s campaign or Trump super PACs in the 2020 election cycle, with contributions adding up to $1,746,423. That list of owners includes:

By contrast, 20 owners have contributed directly to Biden or Biden’s super PACs, though at smaller totals, with overall contributions equaling $405,745. The Biden contributors include:

A relatively small group of donors makes up a huge chunk of the overall donation data. Forty owners account for more than $40 million — more than 85% of all contributions. And looking specifically at these big spenders, it’s clear where their allegiances lie: 77.7% of that $40 million went to Republican causes or candidates, with 18.8% going to Democrats.

This is where the political spending power among American professional sports ownership is concentrated. Here’s that full list:

And when we isolate just the big-ticket donations topping $100,000 from this group, a familiar picture emerges. More than 63% of the $47 million in the database of nearly 3,000 contributions comes from over 100 donations split among these 40 owners — and 79% of that money went to Republican causes.

No matter how you slice it, the big takeaway is clear: The biggest political spenders in pro sports prefer red to blue. — Goldsberry

This table reflects the total contributions for each owner and commissioner in our database over the past three election cycles, grouped by political party. Note that some family members appear together and that only contributions while owners have been involved with the team are included. You can find more of the data here.