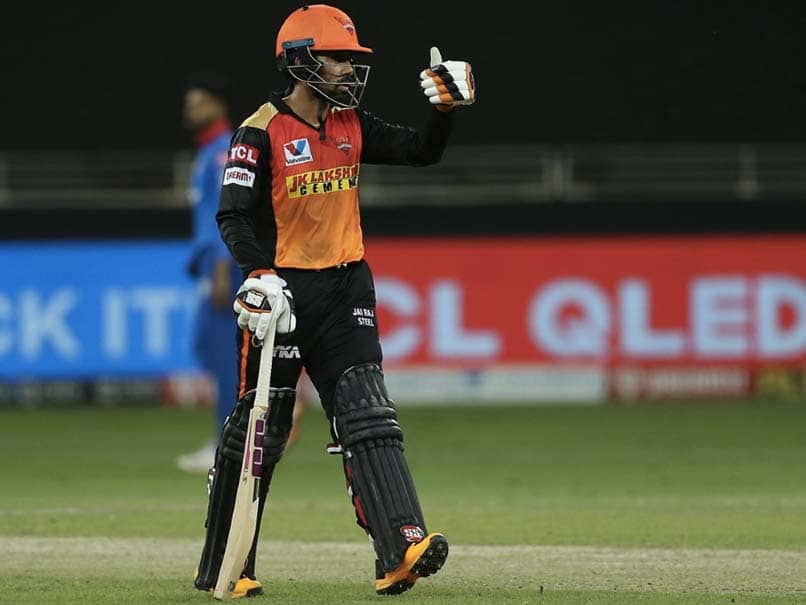 Wriddhiman Saha was adjudged player of the match for his 45-ball 87 vs Delhi Capitals on Tuesday.© BCCI/IPL


Wriddhiman Saha scored a match winning half-century to help SunRisers Hyderabad register an emphatic win over Delhi Capitals on Tuesday. Saha scored 87 runs off just 45 deliveries, hitting 12 boundaries and two sixes. Saha put on a century stand with SRH skipper David Warner, who also scored a half-century. After the win, the wicketkeeper batsman took to Twitter and posted a few pictures from the game and wrote “If a window of opportunity appears, don’t pull down the shade! Congratulations to the entire @SunRisers team!”

If a window of opportunity appears, don’t pull down the shade! Congratulations to the entire @SunRisers team! pic.twitter.com/cywlfIMbDm

Saha was brought into the side to keep wickets as SRH made three changes and left out England wicketkeeper-batsman Jonny Bairstow who made way for Kane Williamson.

Saha and Warner set the tone early with some exquisite shots. The opening pair notched a 100-run stand in the 10th over.

Saha was looking set for a hundred but in a bid to accelerate, he mishit one to Shreyas Iyer and was out for 87.

A cameo from Manish Pandey then powered SRH to an imposing total of 219 for two from their allotted 20 overs.

In reply, Delhi Capitals lost Shikhar Dhawan for a duck as he mistimed a flick shot off Sandeep Sharma.

Marcus Stoinis and Shimron Hetmyer were sent up the order to up the scoring rate but they couldn’t get going.

Rishabh Pant top scored with a knock of 36 as Delhi were bowled out for 131 in 19 overs.

Dubs dig in as Steph tossed for mouthpiece throw
Joey Votto isn’t just a future Hall of Famer; he is the future of the Hall of Fame
Sources: Holloway to return vs. Allen on April 15
India Script History, Become First-Ever Champions Of U19 Women’s T20 World Cup
Dolan backs Knicks pres. Rose: ‘Best guy’ for job