A lot of American soccer fans only dove fully into European club soccer when the Premier League started showing up live on their television about a decade ago. These fans have only heard about AC Milan; they have not yet seen the storied club in full flight.

Like college football’s USC Trojans, Milan are glamorous and dominant when piloted by just the right leader, finicky and mediocre in a less capable set of hands. They have won more Champions League/European Cup titles than anyone besides Real Madrid, but it has been 13 years since they last made even a semifinal. Hell, it has been more than six years since they played a Champions League match at all. Since finishing third in Serie A in 2013, their average league finish has been 6.9. Fishy signings, faulty ownership, poor managerial hires and Financial Fair Play violations conspired to hold them back.

Italy’s top division is on ESPN+. Can Juventus make it 10 straight league titles? If not, will the Milan clubs, Napoli or Atalanta take over?
ESPN+: Live games and replays (U.S. only)
Serie A home | Schedule | Standings

Milan have enjoyed a fantastic run of quality signings, however, and damned if their results haven’t actually been encouraging for once. Since the summer’s coronavirus restart, the Rossoneri have yet to lose in league play — they’ve won 14 league matches with four draws and a 49-17 scoring margin. They are first in Serie A through six matches, and their core stats say this isn’t a lucky start.

They’re also 5-1 in Europa League play, qualifying for the group stage with wins over Shamrock, a spry Bodo/Glimt and Rio Ave in a shootout; they’ve won group games over Celtic and Sparta Prague. (They hosted Lille on Thursday, losing 3-0 to take a tiny bit of shine off their run.) And they’ve done all this while battling the temporary loss of key players such as goalkeeper Gianluigi Donnarumma and ageless striker Zlatan Ibrahimovic to positive COVID-19 tests.

It’s fun to write about an old power that looks like a power again, but is this rise sustainable? 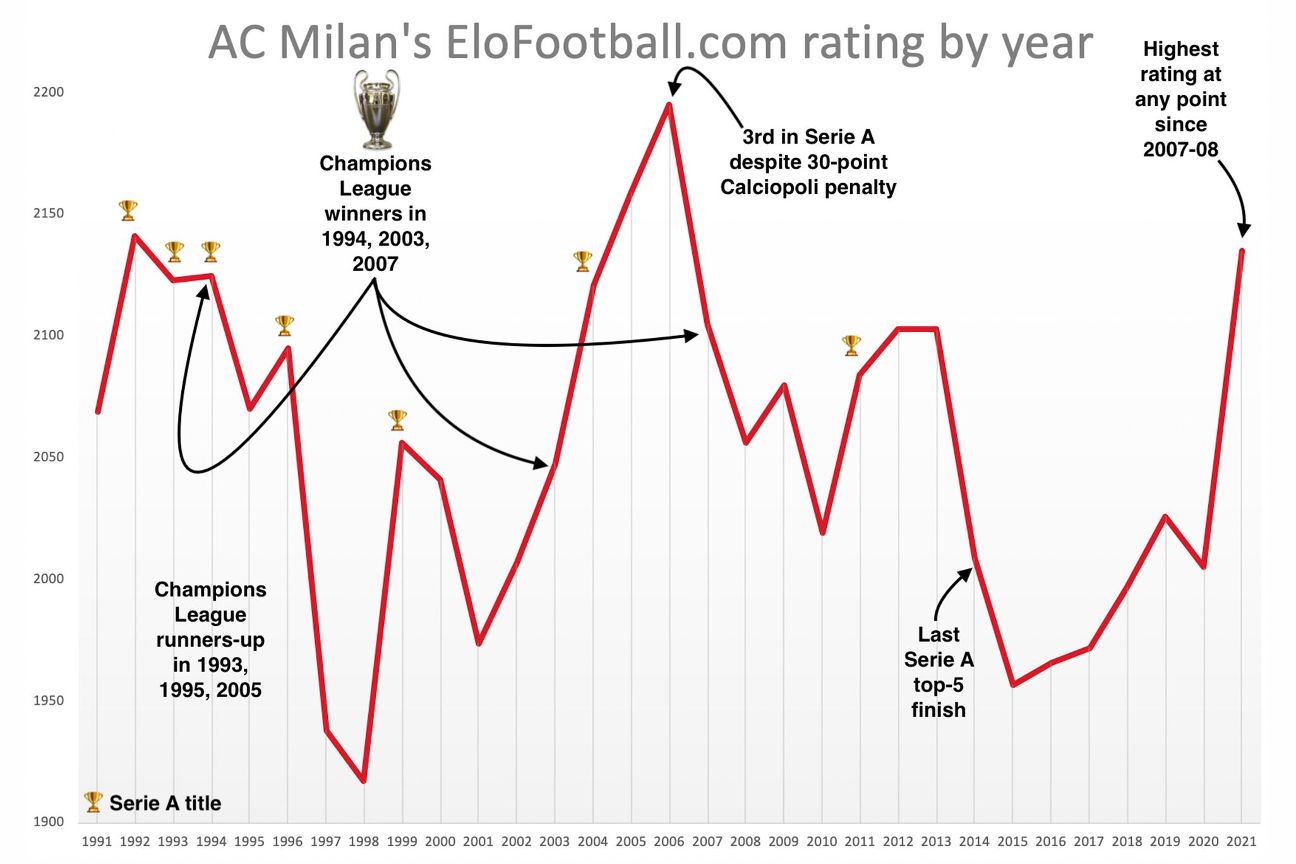 Milan’s surge is the result of a pretty incredible rebuilding job that began in the summer of 2019. Thus far, 63% of their minutes in league play have gone to players acquired within the past 16 months.

Last year, they added left-back Theo Hernandez from Real Madrid, center-back Simon Kjaer from Sevilla, defensive midfielders Franck Kessie and Ismael Bennacer from Atalanta and Empoli respectively, and winger Rafael Leao from Lille. They are all part of manager Stefano Pioli’s preferred XI, as is former Anderlecht winger Alexis Saelemaekers, added in January. All but Kjaer are 23 years old or younger.

To somewhat counter this inexperience and give Pioli a big target man for his 4-2-3-1 formation, they also added the 39-year old Ibrahimovic over the winter. That leaves only four members of Pioli’s preferred XI who were with the club before last summer.

Their depth has been impressive, too. Former Frankfurt forward Ante Rebic has been solid when healthy, young loanees Brahim Diaz (from Real Madrid), Diogo Dalot (Manchester United) and Sandro Tonali (Brescia) have impressed, and another wave of youngsters — 18-year-old forward Lorenzo Colombo, 21-year-old defender Matteo Gabbie, 21-year-old forward Jens Petter Hauge (added from Bodo/Glimt after shining in their Europa battle) — has passed initial tests as well. Injury and positive COVID-10 diagnoses have not slowed down the team, and there appears to be a sturdy backup option for each position on the field.

Teams don’t tend to win titles leaning on either 21-year olds or 39-year olds, though, and Milan don’t have many key players near or in the peak age range of 25-29 or so. Maybe inexperience eventually holds them back in the end, but we can say that their statistical profile befits that of a league leader so far. 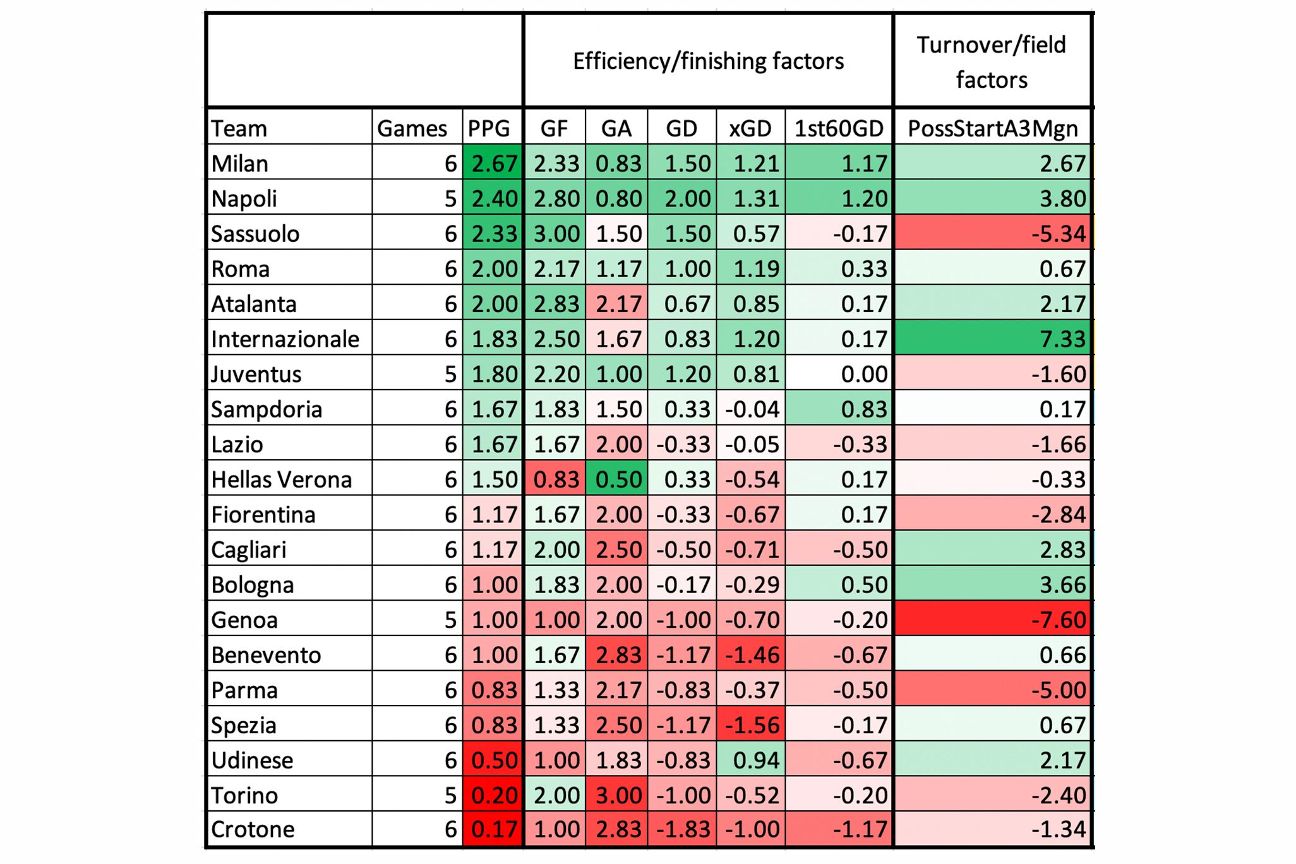 (Note: a lot of the stats from this piece were introduced in a September piece previewing the season. “1st60GD” stands for “goal differential in the first 60 minutes,” and “PossStartA3Mgn” is a team’s margin of possessions starting in the attacking third. This table also doesn’t count Napoli‘s default loss to Juventus — it looks only at matches that have been played.)

Unlike an Atalanta or Sassuolo, Milan’s output has been balanced: they’re fifth in the league in average goals scored and third in goals allowed. Their biggest issue at the moment might simply be that a lot of teams have their respective acts together as well.

In the Premier League, it almost feels like no team is playing incredibly well at the moment; this is eye-of-the-beholder stuff, obviously, but in Serie A it feels like the opposite.

An average number of shots, a high level of shot quality 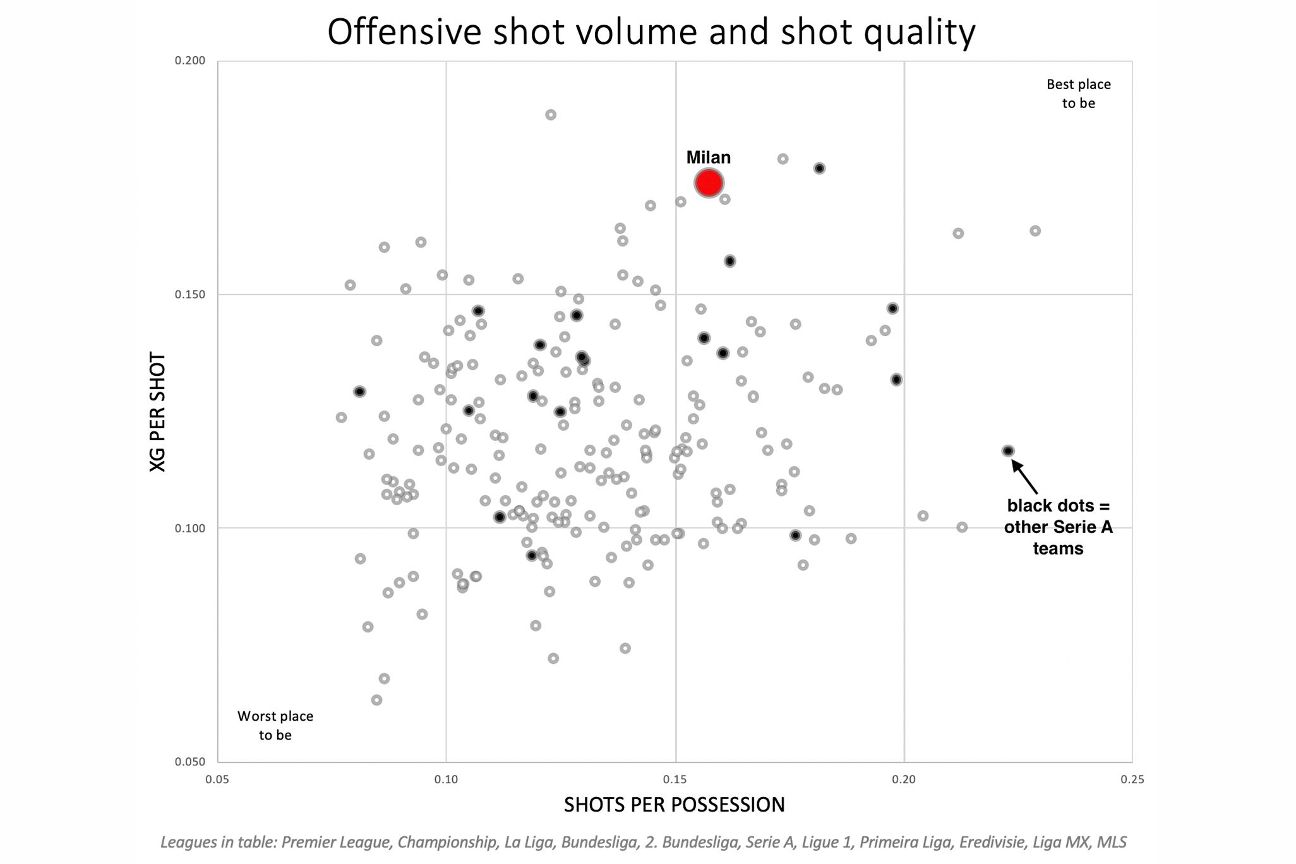 Milan are slightly above average in terms of the number of shots they take, but they stand out in shot quality. Among all of the clubs in Europe’s big five leagues, only Leicester City, Bayern Munich and Roma are averaging higher xG per shot.

Most penalties drawn per match in 2020-21 (Europe’s big five leagues):

Milan have drawn four penalties in six matches, converting three and scoring off of a rebound on a fourth. They’re on pace for 25 penalties drawn, and considering no team topped 18 last year even in the penalty-heavy Serie A, that’s likely unsustainable. Milan are, however, still third in the league in xG per shot if you take penalties out of the equation. This isn’t merely a flop-and-hope attack.

Pioli, who was rumored to be on his way out until realizing that “don’t ever lose a match” is a pretty good way to keep your job, primarily deploys a 4-2-3-1 formation. As a rule, the 4-2-3-1 can end up a little stodgy: it’s wonderfully balanced between defense and attack, but it can also result in quite a bit of “possession for possession’s sake.” But if your three attacking midfielders/wingers are energetic and you have a good target man up front, it can work beautifully.

Dan Thomas is joined by Craig Burley, Shaka Hislop and others to bring you the latest highlights and debate the biggest storylines. Stream on ESPN+ (U.S. only).

Milan most certainly has that. Leao on the left, Hakan Calhanoglu in the middle and Saelemaekers on the right have combined for 26 chances created (15 from Calhanoglu) and four assists in league play, plus three goals (two from Leao) on 21 reasonably high-quality shots (0.14 xG/shot). Diaz has created three chances and scored once, as well, and Hauge scored against Celtic. They have space to get creative, and in Ibrahimovic they have a Patrick Ewing-style post-up man to float crosses toward if they can’t create a better option.

Better yet, their collective energy has allowed Ibrahimovic to play to his own strengths, and it’s allowing them to build for a Zlatan-less future — Ibrahimovic is their leader in xG created, but the next six guys on the list are all 23 and under.

The team can afford for its attacking midfielders to take some risks, too, because the defensive block has been sturdy. 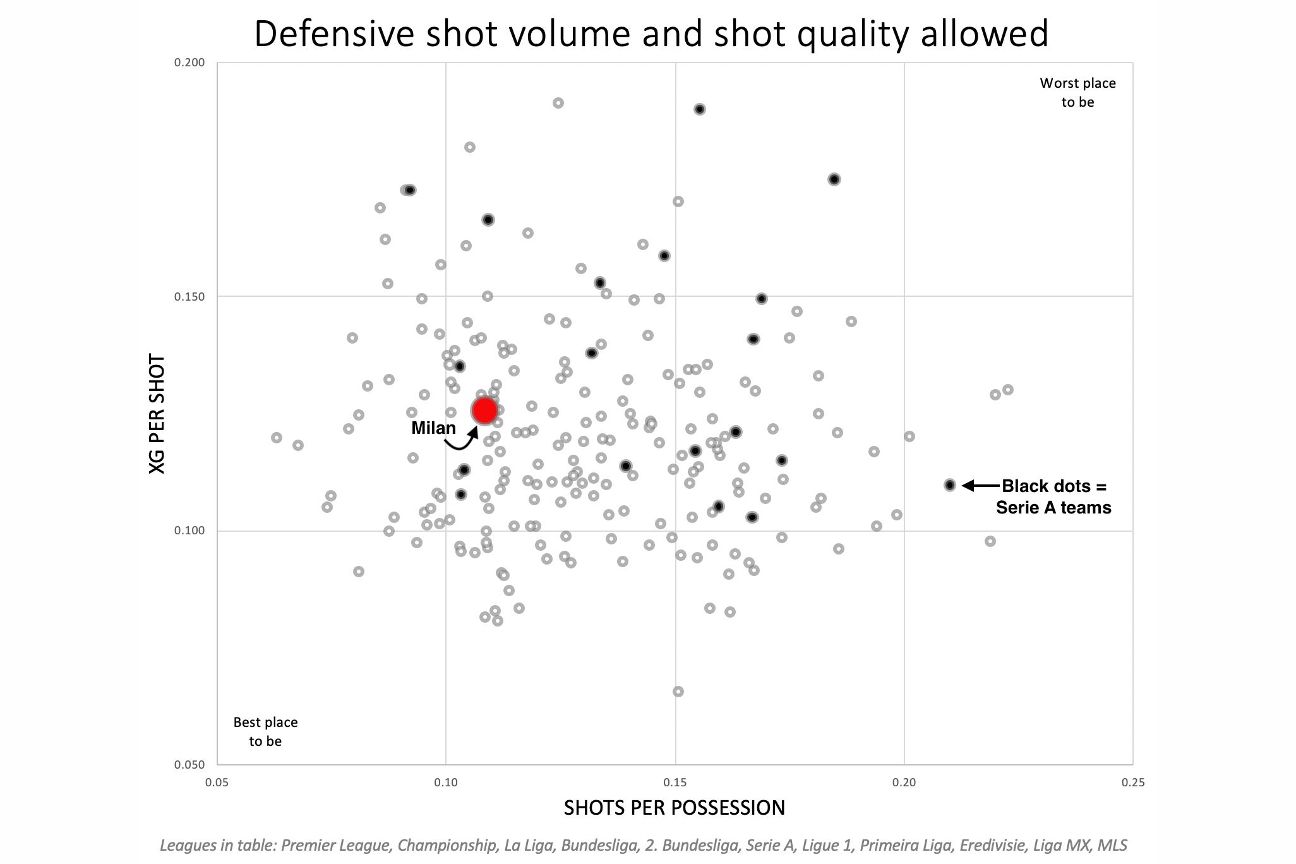 Milan have generated solid possession numbers and a lot of possession teams have a certain defensive profile: low numbers of shots allowed, but because of counterattacks, a high average shot quality. Thanks to the work of their defensive core, however — Kjaer and Alessio Romagnoli/Gabbia at center-back, Kessie and Bennacer in defensive midfield — opponents have been limited in their transition opportunities. Put another way, Milan are generating the benefits of the 4-2-3-1 and minimizing its limitations.

Because of injuries and other absences, Kjaer has already put in more than 1,000 minutes in Serie A and Europa play, which is suboptimal for anyone, much less a 31-year-old. But Gabbia’s play has been encouraging in response.

Shaka Hislop cannot believe how Zlatan Ibrahimovic managed to connect with a bicycle kick aged 39 in Serie A.

Age isn’t the only limitation

I look at a few regression-to-the-mean factors during a given season:

— xG differential in losses. Are you a bit unlucky? Are you getting stomped? The latter suggests problems even if you’re doing well overall at the moment.

— Close-game performance. Few teams tend to average higher than about 2.1 points per game in matches decided by zero or one goal. Top that mark and you’re likely going to suffer some close losses in the near future.

— Save percentage margin and set-piece goals. Only a few teams tend to enjoy consistent advantages here.

— Red cards and second yellows. If your opponent has more of these than you, then obviously you’re enjoying some numbers advantages that probably won’t be sustained.

What do these factors look like in Serie A so far? 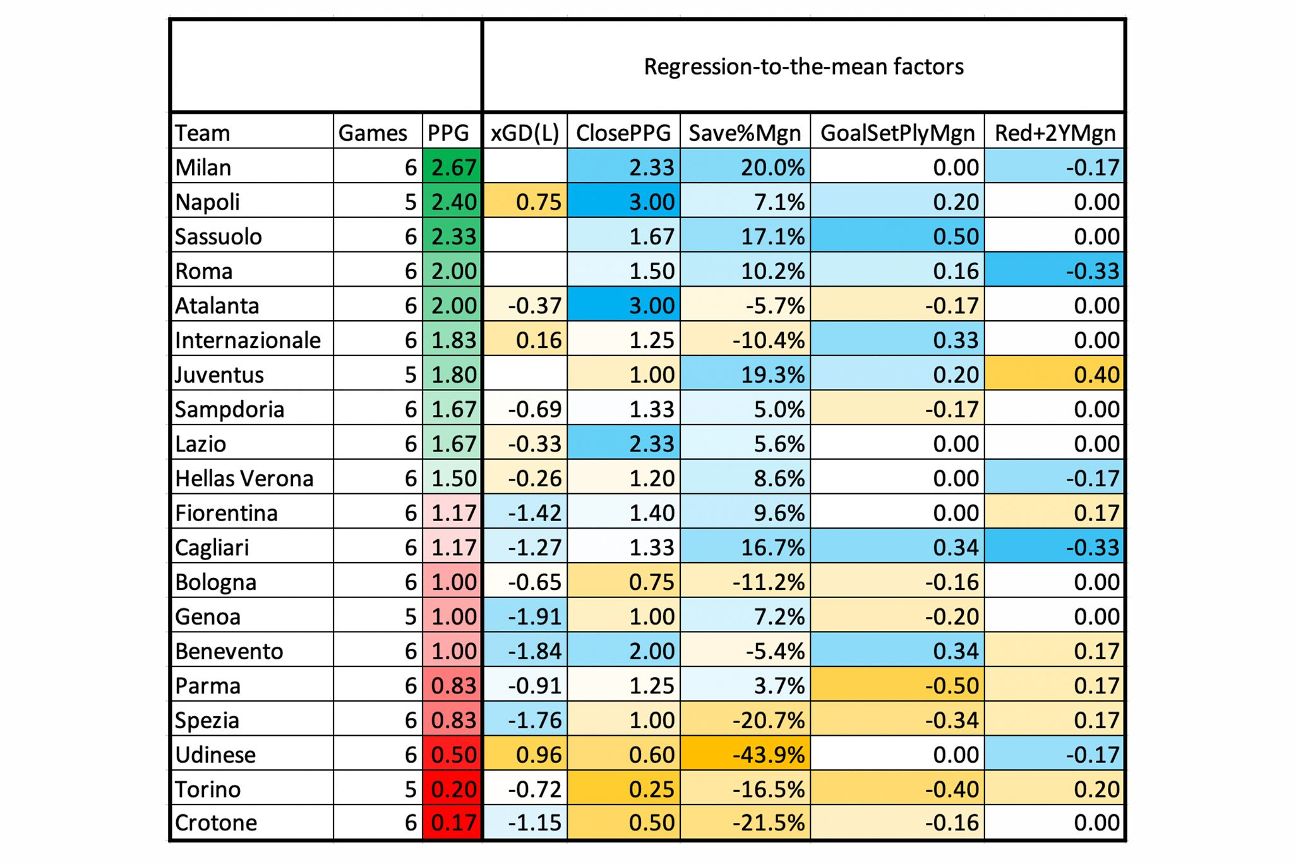 After winning their first three matches by a combined 8-0, the road has gotten trickier. They’re still generating points — 2-1 over a diminished Inter, 3-3 vs. Roma, 2-1 over Udinese thanks to a late Ibrahimovic strike — but again, you don’t usually maintain that. (Plus, they only advanced to the Europa group stages because of a one-goal win and a shootout.) You also don’t usually maintain a save percentage advantage of 20 percentage points, even when you’ve got one of the best young keepers in the world in Donnarumma.

This is shaping up to be the title race we expected/hoped for, and Milan should remain a part of it

I was optimistic that Serie A would see its best title race in years and the numbers back up that sentiment, especially if or when Inter, Juve and Atalanta find their form. But amid a crowded field, Milan have stood out to date.

Milan’s statistical profile is mostly sound, as is its defense. They’ve got known quantities in guys like Donnarumma, Ibrahimovic, Kjaer and Kessie, and they aren’t relying solely on penalties in attack. Still, it wouldn’t be hard to see a funk setting in at some point. Players like Leao, Rebic, Colombo and maybe Hauge will have to step up if or when Ibrahimovic gets injured, the goals could dry up if the shot quality regresses at all, and a few wins could turn into draws and draws into losses.

Even if they lose pace in league play, they have solid odds of reaching next year’s Champions League — 72%, according to FiveThirtyEight’s club soccer ratings (plus a 25% chance at winning the league) — and even beyond this year, the future at the San Siro is so, so much brighter than it seemed even six months ago. Few teams have signed more exciting young players of late, and you don’t have to squint to see a core roster that could remain in place for quite a while.